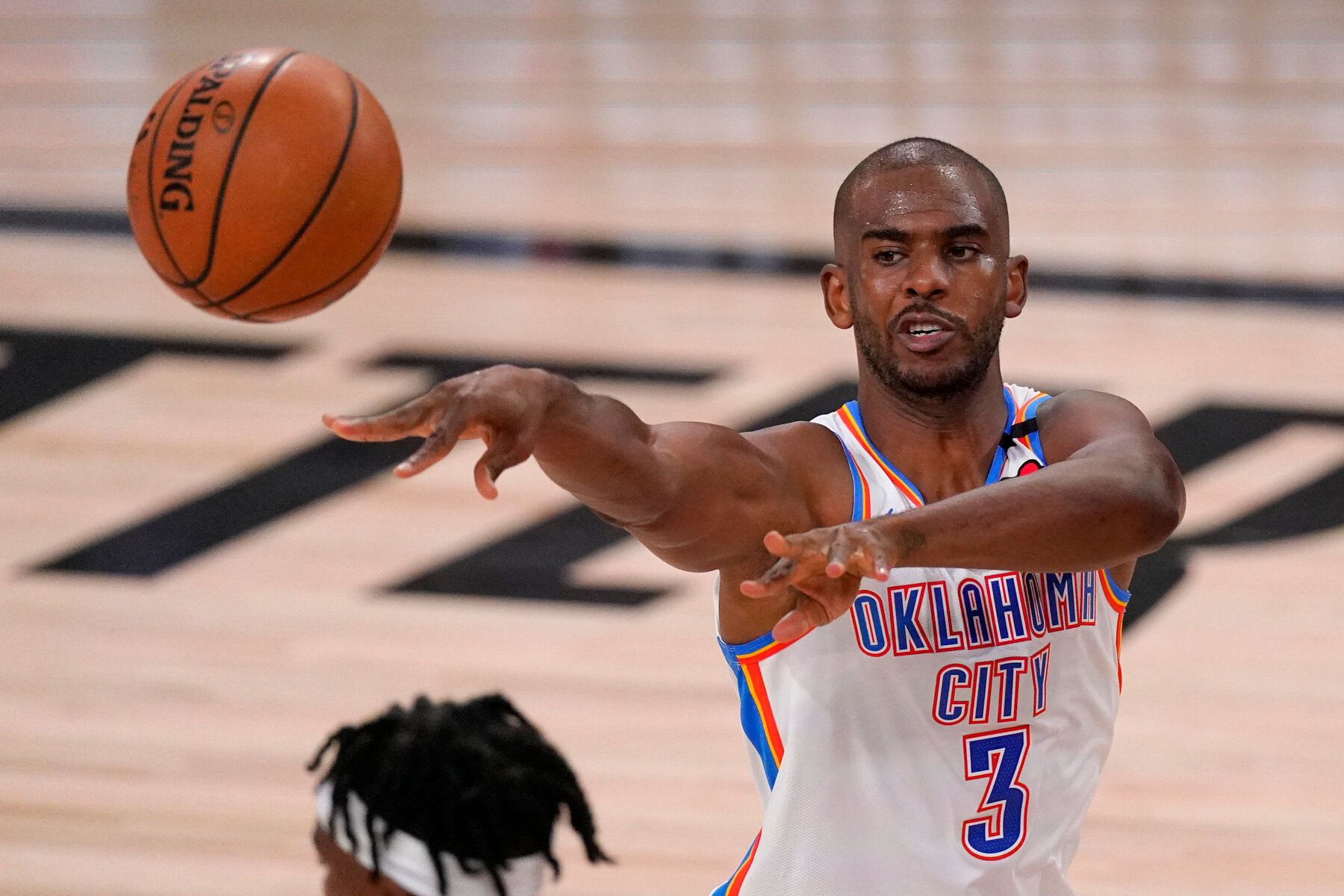 The Phoenix Suns are expected to try to make significant moves this offseason after almost making the playoffs last season. The Suns went 8-0 during the NBA Restart inside the bubble in Orlando, but they eventually fell short of their goal of making the postseason. This early, the Suns are already being linked to possible trade targets when the league finally allows teams to swap players and assets.

According to Brian Windhorst and Tim Bontemps of ESPN, the Suns have high hopes on their current roster, which is bannered by Devin Booker and DeAndre Ayton, who were both instrumental in their 8-0 run in Orlando. In turn, the Suns are aggressively looking for moves that would bolster their playoff chances, and they are reportedly in talks with the Oklahoma City Thunder about a possible trade for Chris Paul.

"The Phoenix Suns have had discussions about acquiring All-Star point guard Chris Paul from the Oklahoma City Thunder," Windhorst and Bontemps reported. "Talks have been ongoing and have continued to gather traction, but there is no deal imminent, sources said. There is currently a moratorium on trades as the NBA goes through procedures to start next season ahead of the league's draft next week."

The Thunder, who surprisingly finished fifth in the Western Conference last season, might go into a full rebuild this offseason. They have already parted ways with former head coach Billy Donovan and are expected to lose Danilo Gallinari in free agency. With Paul already nearing the twilight of his career, it is expected that the veteran point guard would inform the team that he'd rather play for a contender instead of being part of a rebuild.

Trading Paul will be easier said than done for the Thunder, though. While the 35-year-old point guard has proven that he still has a lot of gas left in his tank, his contract is very hard to trade at this point. The former Wake Forest standout still has two seasons in left in his deal, which will pay him around $85.56 million. ESPN also reported that Paul will likely have a say on his next destination, similar to the privilege they gave superstars Russell Westbrook and Paul George when they traded them last year.

Luckily for the Suns, they will likely have enough cap room or assets to absorb Paul's contract. The 10-time All-Star is also expected to be open to getting traded to the Suns because he is very familiar with Phoenix head coach Monty Williams, who has coached the veteran playmaker in New Orleans before. Paul and Williams reportedly have a good relationship, which might be a factor in the ongoing trade talks.

"The Suns could have in excess of $20 million in salary-cap space going into the transaction season, leaving the possibility that they could assemble a trade and still look for other free agents," Windhorst and Bontemps revealed. "Paul played a season under Suns coach Monty Williams in New Orleans from 2010 to 2011, and he has spoken highly of Williams in the past. Paul has also praised the Suns' style of play."

Zach Buckley of Bleacher Report recently suggested a possible trade even before the news about the Suns-Thunder trade talks came out. Buckley said that the Suns should try to send Ricky Rubio and Kelly Oubre Jr. to the Thunder in exchange for Paul. Buckley said that Rubio's arrival in Phoenix last season work wonders for the team, and he thinks adding an upgrade in Paul would be very beneficial for the franchise.

"The Suns tabbed Ricky Rubio as their rebuild accelerator last offseason and saw a decent return on the investment with a jump in winning percentage from .232 to .466," Buckley said. "But Chris Paul could be a different kind of fast-forward button. The Point God might zoom this developmental process to ludicrous speed. His reputation took a few hits in recent years due to his colossal contract and a sometimes-awkward fit with the Houston Rockets, but Paul proved he remains a special talent."

Paul averaged 17.6 points on top of 6.7 assists and 5.0 rebounds per game last season. More importantly, he led the Suns to a playoff stint when no one expected them to be a decent team last season. Paul's leadership is making him an attractive option for young teams despite his lofty contract. The New York Knicks are also among the teams who are reportedly eyeing a deal for Paul.

Paul has ties to the Knicks organization, which is the main reason why he is continuously being linked to New York. Knicks president Leon Rose is the former agent of Paul. The Knicks have the cap room to acquire Paul this offseason, but it would significantly affect their ability to sign a marquee free agent next year. Nevertheless, former Knicks coach David Fizdale thinks that the Knicks would benefit from acquiring Paul, although he is unsure if the 15-year veteran should even think of playing for a rebuilding team at this stage of his career.

"I think he would fit those kids — Mitchell Robinson going to the rim, they get more spacing, more shooting. Absolutely, he would fit. The big stage. He doesn’t get sick,"Fizdale said of Paul. "For him, where he is at his career, I don’t think it’s a good fit for him and what he’s trying to do."

Ian Begley of SNYreported that the Knicks feel that Paul could help them speed up their rebuilding process and be a factor in the development of their young players. However, there are people in the organization who are reportedly wary of giving up too much to the Thunder in a possible trade for Paul. Some team officials want to make sure that they will have enough assets to trade for another marquee player in the future.

"There is a concern about the amount of assets New York would have to surrender to trade for Paul," Begley reported. "Some MSG people are wary of giving up too many assets in a Paul deal because they want to ensure that New York has enough capital in place for a future trade for another high-profile player."

It is also worth nothing that the Knicks have other less-expensive options if they want to address their point-guard woes. The Knicks own the eighth overall pick in the 2020 NBA Draft, which will be good enough to get a promising playmaker. LaMelo Ball, considered as the best point guard in this year's rookie class, is unlikely to be available when they make their pick, but they can go after guards like Killian Hayes and Tyrese Halliburton.

New York is also being linked to Toronto Raptors guard Fred VanVleet, who would become a free agent this offseason. VanVleet is an intriguing option for the Knicks, as he is a proven winner. The four-year veteran averaged career-highs 17.6 points to go along with 6.6 assists and 3.8 rebounds last season. However, he won't come cheap this offseason with experts tagging him as the third-best free agent behind Anthony Davis and Brandon Ingram.

Aside from the Suns and the Knicks, Windhorst said on his latest podcast that the Philadelphia 76ers are also interested in adding Paul. The former Wake Forest standout has ties to organization, having played under current 76ers head coach Doc Rivers during his time with the Los Angeles Clippers. Daryl Morey is also running the show in Philadelphia, and he was the Houston Rockets general manager when Paul played in H-Town.

The 76ers have made it no secret that they are open to making significant moves in the hopes of surrounding superstars Ben Simmons and Joel Embiid with a better supporting cast next season. Windhorst revealed that the 76ers and the Thunder also had talks about a possible trade, but it is not gaining traction at this point.

"There are some East teams that are interested. I think New York has interest. Philadelphia has interest," Windhorst said. "I believe there's been some cursory conversation between Philadelphia and Oklahoma City, but I don't get the impression there's any traction there."

"Chris Paul, I don't think will want to be there. In a trade situation, it's sort of a triangle. Yeah, there has to be a deal with the Thunder and the other team, but Chris Paul has to sort of green light wanting to go there. This discussion with Phoenix is just as much about the Suns having discussions with Chris Paul as it is working out a trade," Windhorst said. "It is my understanding that Chris has interest in Phoenix."