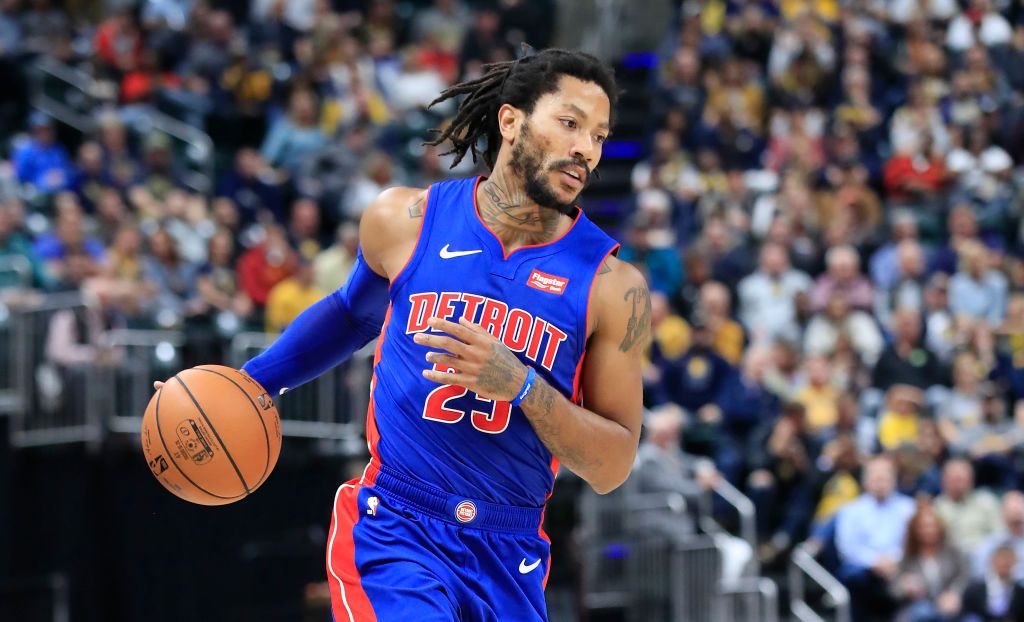 Before the Los Angeles Lakers made a move to sign stretch power forward Markieff Morris, they had their sights set on another Detroit Pistons player. With the Pistons trading away Andre Drummond and buying out the contracts of key cogs Morris and Reggie Jackson, it was obvious that the team is already putting out a fire sale sign on their lawn. However, it turns out that Detroit deemed one player as an untouchable in trade negotiations: former Most Valuable Player of the Year Derrick Rose.

With Rose coming off a rejuvenated performance with the Minnesota Timberwolves last season, he became highly-coveted in free agency last summer. The Pistons won him over, signing him to a two-year, $15 million contract. Before the regular season began, the team had high expectations as they will be fielding a line-up that looked strong on paper. The arrival of Rose would add more depth and experience to their backcourt starred by Jackson and young lefty shooter Luke Kennard. The tandem of Drummond and Blake Griffin was one of the best frontcourts in the Eastern Conference, and the addition of a sweet-shooting combo forward like Morris should solidify their inside-outside presence.

But things just went spiralling downward for Detroit as a season-ending surgery to Griffin’s knee injury deprived them of an elite star to rely upon. With a lowly 19-41 record this season, it is hard to imagine the Pistons to still make it to the playoffs. So one by one, they moved their key players, signalling a change in the direction of the team.

As it looked like the Pistons were headed for a rebuild, it was expected that they will also make Rose’s name available in trade talks. The Lakers apparently showed their interest in trading for the veteran guard, but the Pistons stood firm on holding on to Rose, as per ESPN analyst and insider Brian Windhorst. During an episode in his own The Hoop Collective podcast, Windhorst reported that the Pistons coaching staff were not willing to part with Rose.

"No, there's no chance. He's under contract for next year at a good number. From what I understand, when the Lakers called the Pistons and expressed an interest in trading for Derrick Rose, the Pistons said 'Hey, we appreciate you calling, but we're not trading him. Dwane Casey likes him. We think he's going to be important for us next year.' He just wasn't available."

Rose, 31, is norming all-around numbers of 18.0 points, 2.4 rebounds and 5.7 assists this season. It is not surprising that the Lakers tried to engage the Pistons for the services of Rose as they are still in need of a proven shot creator to lead their second unit. While Rajon Rondo can still rack up the assists, he has not been efficient and his shot-making pales in comparison to Rose’s ability.

Yet, it is not just the Pistons organization who wants to keep this partnership alive. As per Vincent Ellis of the Detroit Free Press, Rose himself reiterated that he is already happy in his place in Detroit. Rose has fulfilled a sixth man role for the team, while still leading them in points per contest this season.

"It's up to the front office. [Pistons vice chairman] Arn [Tellem] gave me his word that if something were to happen, he will text or call, but I told him that I want to stay here, but it's not up to me. You already know how that goes.”

By trading away Drummond and waiving Jackson, it is mind-boggling as to which direction the Pistons are headed for. The 30-year old Griffin will be coming back next season, but the high-leaping forward has endured so many injuries in his career. In the 18 games that he played this season, Griffin has put up career-low averages of 15.5 points and 4.7 boards. Injuries have definitely clipped Griffin’s athleticism and mobility, evident in the drastic dip in his production on the court.

As far as their young assets are concerned, the Pistons only have Kennard, up-and-coming big man Christian Wood and a combo forward in Sekou Doumbouya. But none of those names speaks of All-Star caliber potential, and the Pistons even engaged with the Phoenix Suns for a Kennard deal before the trade deadline.

As for Rose, it is hard to understand why he would not demand a buy-out agreement. Obviously, Rose pictured out a possible return to the playoffs when he joined the Pistons last offseason. With the team having a different approach moving forward, we still might see Rose’s name in trade rumors this summer.

With Kyrie Irving undergoing a season-ending surgery on his shoulder, the Nets have now officially lost their two newly-acquired superstars to injuries. Kevin Durant never logged in a single minute in his first season in Brooklyn as he is still recovering from a major Achilles injury.

However, Nets general manager Sean Marks emphasized that Irving and Durant will have a significant say on how the team will structure their roster in the offseason. During an sit-down on the WFAN Afternoon Show, Marks indicated that the Nets are due for personnel changes this summer.

“(Kyrie) and Kevin (Durant) and the rest of guys that have all signed on here and are a part of this, they hope to build this, and they hope to build something sustainable, something not only they can be proud of but that’s long-lasting for the borough. So, I always take a select handful of players in terms of how we continue to build this. We’ve done this from Day 1... gather their thoughts. These guys know the players better than anyone else. This is what we’re looking at. Well what do you think? They’ll be brutally honest because they’ve got to go play with those guys. So I think it’s important to weigh their opinions from time to time, and we certainly do that.”

Even though many people would be turned off by the idea that two players will key in on how the team will retool their roster, we should remember that both Irving and Durant have hoisted the Larry O’Brien championship trophy already. Kyrie was the center of a lot of criticisms when he aired out his honest thoughts regarding the Nets’ need of more proven firepower to really push the team to become elite. Yet, it turns out that the Brooklyn front office is not critical of Kyrie’s voice as it is evident that they even encourage him to give suggestions for the improvement of the roster.

Of course, it remains to be seen as to who will become the team’s expendable assets in the offseason. ESPN’s Tim Bontemps has an idea about this, citing the names of three key players for the Nets this season.

“Several people mentioned the Nets could be active in trades. Spencer Dinwiddie, Caris LeVert and Jarrett Allen are all names that rival executives believe to be available in some form. They could be attractive pieces for the Nets to package together to land a third star that sends them to the top of the conference. Some also wonder whether Brooklyn will spend big to keep unrestricted free agent Joe Harris this summer.”

Of those three names, Dinwiddie has been the hottest in the past few weeks. The scoring combo guard has been playing though a lot of trade speculations, but his performance on the court has stayed excellent. The 26-year old gunner is putting up career-highs of 20.8 points and 6.6 rebounds per game, an impressive stat line that has other teams eyeing him in trade scenarios.

Dinwiddie’s name has been linked to the Orlando Magic and the Pistons for a while now, with the Magic scenario the more realistic one. As they already have a star on their frontcourt in Nikola Vucevic, Aaron Gordon has become a valuable trade asset for Orlando. They have a bevy of other combo forwards in the line-up like Jonathan Isaac and Al-Farouq Aminu. The problem is that those two aforementioned names are currently injured, increasing Gordon’s value to the team. Moreover, Gordon has upped his performance as of late, arguably becoming the team’s most productive player in recent games.

Will the Nets entice the Magic for a Dinwiddie-Gordon swap? For now, that is up in the air as both teams fight to maintain control of their current playoff seeding. The Nets are sitting on the 7th spot in the East, while the Magic holds on to the 8th seed.