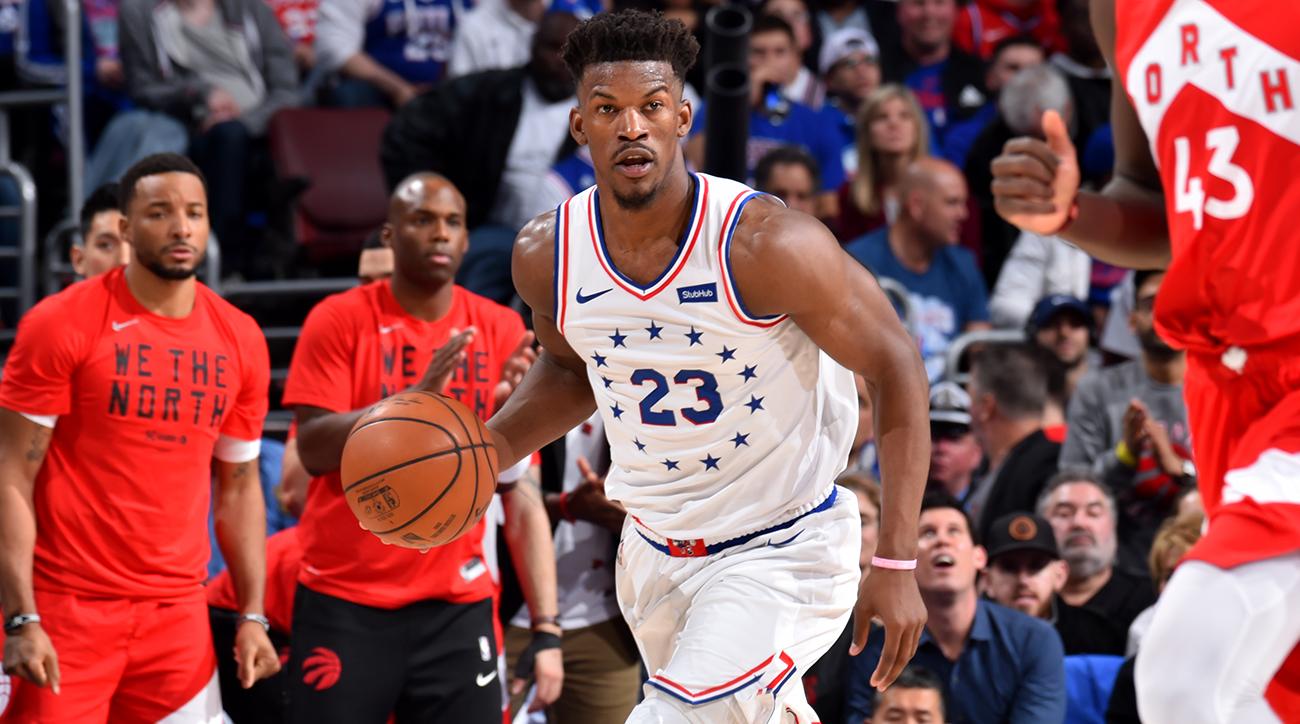 Rockets in serious contention to trade for Sixers’ Butler

With another tough playoff exit this year, the Houston Rockets are left with more questions than answers. Save for superstar guard James Harden, the Rockets front office basically put the entire team on the trading block, including key cogs Clint Capela, P.J. Tucker and Eric Gordon. Reports also say that the Rockets are in the running to acquire Philadelphia 76ers star wing player Jimmy Butler as the team is confident that they can arrange a sign-and-trade scenario for the 29-year old forward, per Jonathan Feigen of the Houston Chronicle.

“The Rockets expect to be “in the mix” for Butler, a person with knowledge of the team’s thinking said, and have stepped up efforts to arrange trades necessary to offer the 76ers a variety of sign-and-trade options to make it happen if that is Butler’s choice.

That individual said the Rockets “feel good” about their chances to sign the 29-year-  old Houston native, but that it is much too soon to have more of a sense about how   he feels.”

Acquiring Butler through free agency is out of the question for the Rockets as they are currently over the cap with Harden, Capela and Chris Paul commanding massive contracts. The only way they could get Butler would be to extend a great pitch to the Sixers. That pitch would certainly involve Capela and Gordon to match the salaries, though it’s difficult to imagine Philadelphia trying out a pairing of Capela and Joel Embiid on the frontcourt.

If that’s the case, the Rockets would need to involve a third team who would be willing to take in Capela. ESPN’s Adrian Wojnarowski also mentions that the Rockets,

“would potentially need to make this a multiteam deal to satisfy the rules of base-year compensation that would cover Butler’s outgoing salary.”

Aside from scenario that would include Capela and Gordon in the trade, Wojnarowski also points out that the Rockets have a Plan B if the Sixers wouldn’t want the Capela package.

Offering Capela, Gordon, and Tucker on separate deals could be the easier path for the Rockets. However, they also have to consider if the Sixers are willing to ship Butler in exchange for future draft picks. Speculations have it that Butler is still considering a return to Philly, so that means the Rockets don’t have the higher ground in this potential negotiation.

Los Angeles Lakers were in for a treat Thursday night. With recently-acquired superstar center Anthony Davis waiving his $4 million trade kicker, and the Lakers front office successfully dumping the contracts of three of their players, the team has now created an opportunity to offer a free agent superstar a max contract. ESPN’s Adrian Wojnarowski, Zach Lowe and Bobby Marks have the inside scoop on this interesting development.

Davis also agreed to waive his $4 million trade bonus, sources said -- which creates  the additional space that will allow the Lakers to pursue a max-contract-level free agent, or divide the money among multiple players.”

The Lakers will also send a 2022 second-round pick to Washington, while the Wizards will ship cash to the New Orleans Pelicans. Davis’ decision to waive his trade bonus will be very much appreciated by the organization. The Lakers now have a total of $32 million to spend in acquiring a max player like Toronto Raptors star Kawhi Leonard or Boston Celtics point guard Kyrie Irving.

For the Wizards, getting Wagner should be a welcome sight. Wojnarowski mentions that Wagner was actually in the draft radar of the Wizards in 2018, and even invited him twice for pre-draft workouts. The Wizards wound up drafting Troy Brown Jr with their 15th pick, while Wagner was selected by the Lakers with the 25th pick. Wagner is a prototype stretch big man in today’s pace-and-space game, and his ability to develop a deadly inside-outside game should be intriguing in terms of his potential.

The Atlanta Hawks have agreed to trade veteran defender Kent Bazemore to the Portland Trail Blazers in exchange for another swiss knife forward in Evan Turner. Hawks general manager Travis Schlenk expressed his gratitude for Bazemore’s contributions to the team, while also reiterating his excitement on acquiring Turner, per Chris Vivlamore of The Atlanta Journal-Constitution.

“We are appreciative of Kent’s contributions to the Hawks organization and to the greater Atlanta community over the last five years. We wish him and his family all   the best in Portland.

We are happy to add Evan to our team, a veteran who we believe can help our club. The versatility he has shown throughout his career will be valuable for us this season.”

Despite only logging in 24.5 minutes per game for the Hawks last season, Bazemore was still able to put up a decent all-around stat line of 11.6 points, 3.9 rebounds, 2.3 assists and 1.3 steals per game. His excellent defense will still be his trump card, but Bazemore’s abilities to space the floor and to create shots are vastly needed by the Blazers. During his introductory press conference, Bazemore says that getting back to winning basketball should be a “breath of fresh air” for him, per Casey Holdahl, a beat reporter for the Blazers.

"It's a breath of fresh air. The past two years have been tough. I'm guy who loves to compete every night -- obviously I want to thank the Atlanta Hawks for extending my career, putting me in a position to thrive and put me in a position to be sought- after with a franchise like the Portland Trail Blazers... It feels good. I know these guys want to win every night and it's something that understood, these guys don't have to talk about it.

That's another thing about playing in the West: there's really no night's off.  Getting back to that brand of basketball, playing at a high level every night is what I love."

Bazemore will join Portland’s elite backcourt duo of Damian Lillard and CJ McCollum, as well as starting center Jusuf Nurkic who is still recovering from a major leg injury he sustained at the latter part of the regular season. However, Blazers president of basketball operations Neil Olshey says that the recent Bazemore trade is just the beginning of the team’s offseason moves, per Sean Meagher of OregonLive.

“Roster building is fluid. We went into the draft, we had certain plans and a when player got to us we weren’t expecting, we consider that a win. Where we are today, adding Nassir and Kent, that’s moving the ball forward for us (but) we’re clearly not done.

We’ll continue to work and find ways to compete and we will continue to build the roster and hopefully do what we did last year, which is when it really matters late in the year, we have a team that can go on the kind of run we went on last season.”

Turner, a former second overall draft pick, will be teaming up with the Hawks’ young core consisting of Trae Young, John Collins and recent draft picks, Cameron Reddish and De’Andre Hunter. Turner’s veteran presence will be needed by the young Hawks team, and his steady playmaking off the bench should be instrumental if the Hawks are considering a serious playoff push next season.