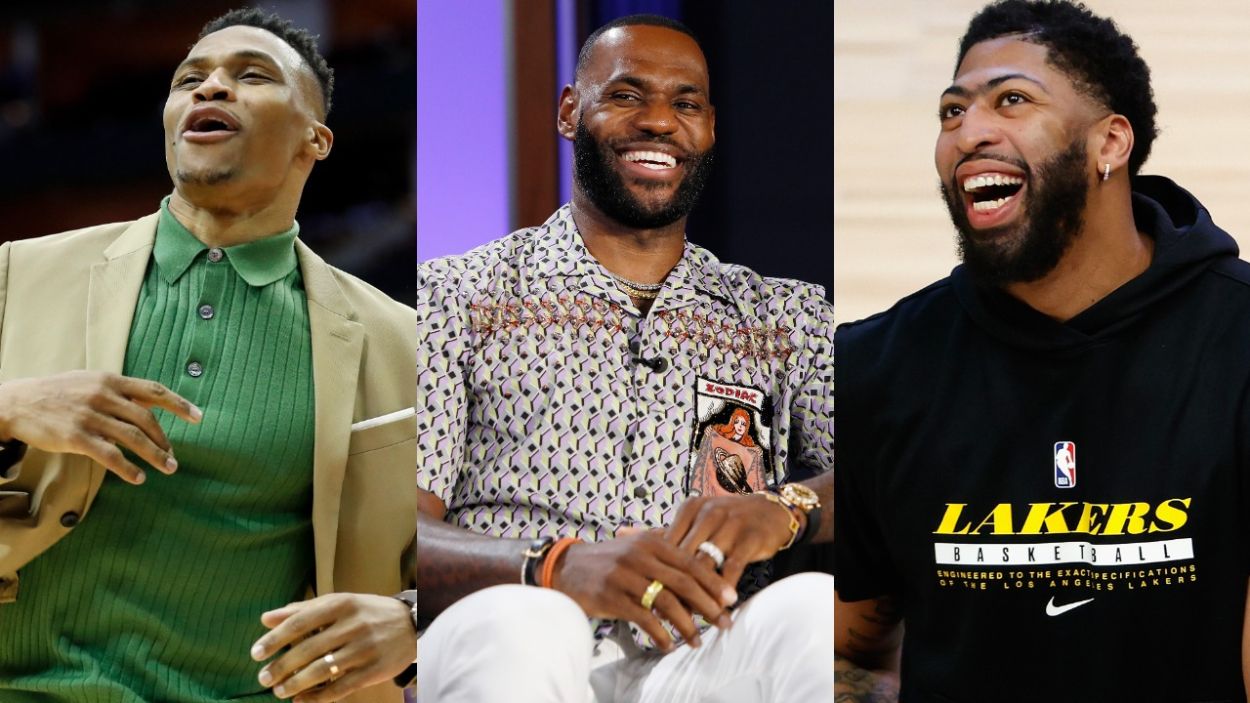 Addition of Westbrook forms a star trio in Lakers camp

The Los Angeles Lakers, the 2020 NBA champions, will be rolling out their own version of the “Big 3” next season. After a multi-player trade deal with the Washington Wizards, nine-time All-Star point guard Russell Westbrook is heading to the Lakers camp to join forces with four-time Most Valuable Player LeBron James and superstar big man Anthony Davis.

In a column written by senior writer Kevin Pelton of the ESPN, the Lakers are shipping promising young forward Kyle Kuzma, veteran shooting guard Kentavious Caldwell-Pope, former Sixth Man of the Year Montrezl Harrell, and a 2021 first-round draft pick to the Wizards. As a return package, the Wizards are sending Westbrook, and two future second-round draft picks in 2024 and 2028.

In a separate article published by the ESPN,  it was noted that this is not the only trade avenue that the Lakers took before they settled on the deal with the Wizards. As per the sources of ESPN’s Adrian Wojnarowski and according to multiple reports from numerous credible media outlets, the Lakers also had talks with the Sacramento Kings about the possibility of landing shooting guard Buddy Hield. Hield, one of the best three-point shooters in the league right now, is coming off a season in which he put up a stat line of 16.6 points, 4.7 rebounds, and 3.6 assists, while shooting an efficient 39% clip from beyond the arc. It is without a doubt that he could be of huge assistance to the Lakers, especially with his ability to score and space the floor.

But eventually, the Lakers settled on the deal that landed them an established All-Star. Westbrook has bounced around from one team to another, but is without a doubt that he is still an elite player in the league.

The Lakers also had talks with the Sacramento Kings on a possible Buddy Hield deal involving Kuzma and Harrell, sources told Wojnarowski, but ultimately turned to Westbrook. Westbrook will join LeBron James, Anthony Davis & Co. in Los Angeles, giving the team a nine-time All-Star point guard. Westbrook, who turns 33 in November, has averaged a triple-double in a season four times in his career, including this past season. He gives the Lakers two of the top five players in career triple-doubles: Westbrook has 184, James 99.

The Lakers will be Westbrook's fourth team in as many seasons. He will be the fifth  former MVP to play for four different franchises in a span of four seasons or fewer, joining Bob McAdoo, Shaquille O'Neal, Allen Iverson and Derrick Rose, per Elias Sports Bureau research. The Wizards had acquired Westbrook from the Rockets last December as part of the John Wall deal. In his first and only season in Washington, he averaged 22.2 points, 11.5 rebounds and 11.7 assists, although he shot just 43.9% from the floor and 31.5%   from 3. While the trade can't officially be announced until Aug. 6, when the salary cap becomes official, Westbrook penned a goodbye to D.C. on social media Thursday night.

Having said all these, it is without a doubt that Westbrook brings a whole lot of new dimensions for this Lakers squad. Shooting and floor spacing could be a problem, along with team defense. That was where the Lakers were good at last season, especially with their crop of good perimeter defenders in Kentavious Caldwell-Pope and Alex Caruso. But both of those players are now out of the Lakers’ roster, as Caldwell-Pope was included in the Wizards package while Caruso went on to sign a multi-year deal with the Chicago Bulls.

But with a versatile player like Westbrook around, the Lakers get a good scorer and an elite all-around star. He is coming off another triple-double season, the third time that he has done so in his very productive and illustrious career. In his lone year with the Wizards last season, Westbrook came up with a tremendous stat line of 22.2 points, 11.5 rebounds, 11.7 assists and 1.4 steals per game. However, his shooting percentages were drastically down, especially his three-point shooting and free throw clip. So that is something that the Lakers have to resolve, especially given the fact that LeBron works better with teammates who can space the floor for him.

As for the defensive point of view, there is no doubt that Westbrook can be good at it when he puts in the effort. He has averaged more than two steals per game in two seasons, so there is the fact that his superb athleticism and mobility allow him to hound passing lanes or strip ball-handlers whenever the opportunity arises. It is all a matter of having that defensive mindset for Westbrook, which he would surely have in this championship-chasing Lakers squad.

As per the article written by Pelton for the ESPN, he pointed out that Westbrook’s relentless style of driving down the lane and attacking the rim will always put a high level of pressure for opposing teams’ defenders. More than the strong finishes he creates for himself inside the paint, Westbrook is also a good passer especially in drop-off situations with big men camping or cutting to the rim. Moreover, it is Westbrook’s credibility as a top-tier scorer in the league that will take the pressure off LeBron and AD’s shoulders, and that will bode well as the Lakers stars preserve their energy for the more important games in the playoffs.

Let's consider the Lakers' "it might work for us" reasoning. Westbrook was legitimately outstanding for stretches in both Houston and Washington. With the Rockets, that came during the six weeks between Clint Capela's injury and the NBA's pause due to the   COVID-19 pandemic. Over that stretch, Westbrook averaged 31 PPG on 52.5% shooting, the best efficiency of his NBA career. After dealing with a quadriceps injury early in the 2020-21 season, Westbrook was a key part of the Wizards' play-in push. Over the final six weeks of the regular season, Westbrook averaged 23.0 points, 14.0 assists and 13.5 rebounds, unprecedented numbers even for the first player to average a triple-double in a season since Oscar Robertson.

Watching Westbrook late in the season, I was struck by the pressure he still puts on defenses with his relentless attacking in transition and early offense. At 32 (he'll turn 33 in November), Westbrook remains as dominant a sheer athlete as any with the ball in his hands. He was a driving force behind the Wizards leading the league after the All-Star break with 57.4 points in the paint per game, according to NBA Advanced Stats. Westbrook assisted on 446 shots in the paint in the regular season, per Second Spectrum tracking, more than 100 more than the next-best passer (Trae Young with   343). Adding a third elite shot creator to James and Davis gives the Lakers the safety net they lacked last season when both stars were injured. They hoped Dennis Schroder would be that player, but Schroeder came up lacking in that role and is no Westbrook.

Of course, Rob Pelinka and the rest of the Lakers front office still have a lot of work for them to do. The Lakers roster now consists of Westbrook, James, Davis, and Marc Gasol, along with their recent free agency signees in veteran combo forward Trevor Ariza, defensive-minded big man Dwight Howard, veteran sharpshooter Wayne Ellington, and all-around perimeter player Kent Bazemore.

There are rumors that the Lakers could be bringing in veteran scorer and former All-Star forward Carmelo Anthony, who interestingly is also a very close friend of LeBron. LeBron and Melo have been rivals ever since they entered the league through the 2003 NBA Draft, and have always talked about teaming up to chase a championship down the road. With the Lakers in need of scorers in the second unit, this could be the perfect time for Carmelo to bring his talents to Hollywood and join forces with his buddy, LeBron James.