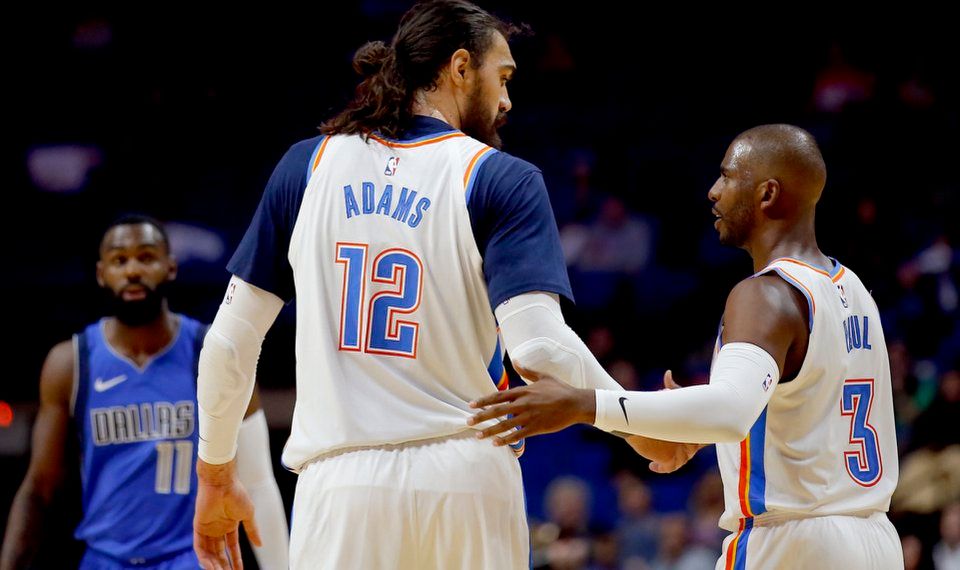 Steven Adams has long been the frontcourt anchor of the Oklahoma City Thunder, but that may change soon. With the departure of franchise point guard Russell Westbrook following his blockbuster trade to the Houston Rockets, some people are already expecting another trade involving Adams as well.

Despite the looming possibility of a trade, the 26-year old big man has good words for the Thunder organization. Adams emphasizes how great a treatment he has gotten from the organization throughout his six-year career, per Royce Young of the ESPN.

"So even if they did trade me, it's obviously just a huge honor. And I know with every player that's here, it's been a huge honor to contribute to the history that Oklahoma is making.

The one thing this organization does really well is you keep consistent with the values. Doesn't really matter who the players are, you've just got to uphold -- we still represent Oklahoma, the people here. We still have a duty to the people that we have to fulfill."

Adams is coming off the most productive season of his career. He racked up a near double-double average of 13.9 points and 9.5 boards, along with 1.5 steals and a block per game. Adams could have easily eclipsed double digits in rebounding but he would defer to Westbrook in terms of defensive rebounding. Adams explained in the interview that they were not “stat-padding” Westbrook’s numbers. Instead, the team wanted the athletic point guard to rebound the ball, while Adams and the other three players immediately sprint down the floor for a potential transition basket.

Hailing from New Zealand, Adams played college basketball for the Pittsburgh Panthers. He was a one-and-done college standout, as he was drafted by the Thunder in 2013. Adams quickly impressed in the NBA as he started 20 games in just his rookie season. Adams’ toughness and business-like approach to the game has earned him an excellent reputation among his peers. Because of that, he became a permanent starter for the Thunder in his sophomore year.

But the Thunder is obviously headed to a new direction. It remains to be seen if they activate full rebuilding mode and trade veteran star playmaker Chris Paul, who they received via the Westbrook trade. Even with Paul on the roster, the Thunder is still a long shot from making the playoffs in the stacked Western Conference.

With that said, the possibility of the Thunder blowing it up and rebuilding their team around sophomore guard Shai Gilgeous-Alexander have heated up rumors that Adams could be shipped soon. Heavy.com’s Sean Deveney recently confirmed these speculations, but pointed out that the Thunder has been asking quite a high price in exchange for Adams’ services.

Sources told Heavy.com that the Thunder are seeking a draft pick, a young player  and salary relief for Adams.

“They set the price too high,” one league executive said. “That’s what you’d expect and maybe it will drop as the year goes on. It’s tough to take on his contract (two years, $53 million remaining) and give up picks and players. Most teams are pretty well set at the center spot now, you have a big guy and you have your small lineup. You can’t just take on a contract like that. There isn’t a big number of teams who could take him.”

While it’s improbable that the Thunder can find a willing trade partner for Adams at this time, there is still a great possibility that contending teams will take a look at the seven-footer right before the trade deadline. If Adams display a more consistent long-range shot and a much-improved ability on playmaking and ball-handling, playoff-hopeful teams in need of an inside presence on both offense and defense.

The Golden State Warriors are really serious in investing a long-term plan for newly-acquired young superstar guard D’Angelo Russell. The Warriors received the All-Star guard via a sign-and-trade deal that also involved Kevin Durant moving to the Brooklyn Nets. It somehow cushioned the loss of Durant, although many people viewed the Warriors’ acquisition of Russell as a valuable “trade bait” asset in the future.

However, The Athletic’s Ethan Strauss recently had an inside scoop on how intent the Warriors front office are in creating a long-term plan for their 23-year old star.

“There’s a strong possibility that the Warriors actually want their newest big  acquisition for seasons beyond this one. Their front-office leaders, Joe Lacob and Bob Myers both, are as smitten with him as any team that just selected a top-5 player in the draft.

I believe that the Warriors’ public messaging actually matches their private beliefs. While it’s nice to retain the “optionality” that comes with signing a 23-year-old max player, I don’t think that he was primarily acquired for his trade value. The front office’s first hope is that Russell flourishes alongside Curry and becomes a foundational piece.”

Russell is coming off the first All-Star year of his young career. Drafted by the Los Angeles Lakers as a second overall pick in 2015, he was traded to the Nets in 2017 and flourished under the pick-and-roll-heavy system of head coach Kenny Atkinson. He put up career-highs of 21.1 points, 3.9 boards and 7.0 assists, while shooting a solid 51% from the field and 37% from three-point territory.

With the injured Klay Thompson set to miss most of the upcoming season, Russell has been anointed as the new starting shooting guard for the Warriors. Although he is not yet in Klay’s elite level of perimeter marksmanship and defensive skill, Russell is still a fitting complementary piece for Steph Curry’s game. Russell’s court vision and on-point playmaking should give Curry easier opportunities to catapult the long ball. In an interview with Connot Letourneau of the San Francisco Chronicle, Curry sounded very optimistic on how good his partnership with Russell will turn out to be.

“We played a couple of times, worked out a couple of times over the summer and we had a lot of conversations about what it could look like. These next three weeks will be important for us to create a vibe and continue to build chemistry. (I’m) excited about some of the stuff we talked about, and the options we have to kind of work off each other.”

Even with Klay sitting out until probably mid-March next year, the Warriors will still be a top team in the West. Draymond Green is now given more freedom to anchor the team’s offense, while Curry should have another historic season under his sleeves.

The Toronto Raptors lost the most valuable player of their championship season, but they are still positive that they have what it takes to contend again. With the departure of Kawhi Leonard, many expected that the Raptors will move the large salaries of their veteran players and head towards a new direction with young star Pascal Siakam at the front.

However, Heavy.com’s Sean Deveney recently reported that the Raptors front office will not entertain any trade negotiations for Lowry, Ibaka and Gasol.

“League sources told Heavy.com that the Raptors are quite happy with where they are entering this season and have not been entertaining trade talks on its three big-dollar veterans—center Marc Gasol, guard Kyle Lowry and forward Serge Ibaka—each of whom happens to be in the final year of his contract.”

Having signed Lowry to a contract extension just a week ago, it sure seems that they will try their luck with their current roster this season. Along with the quickly-rising game of Siakam, the Raptors also acquired forwards Stanley Johnson and Rondae Hollis-Jefferson to shore up their depth. OG Anunoby is coming off an injury-plagued season and should also be a key cog for Toronto.

But it also turns out that keeping their veteran players and making the playoffs this year are also vital parts of the team’s future plans. Deveney include a quote from a trustworthy source, saying that another playoff appearance should bolster Toronto’s value and gravity in attracting big-name free agents.

“Masai was always going to rebuild things around Siakam and OG (Anunoby) and the other young guys eventually. He’s going to have a ton of cap space. But he’s got to be able to get free agents to go there and it’s still a tough sell, getting guys to go to Canada. So they’ve got the ring, if they can get to the playoffs again, he has something more to sell when that cap space comes available.”

With the professional and efficient way that they managed Kawhi’s health last season, along with Ujiri’s excellent credibility around the league, the Raptors could indeed become a haven for top-tier players. It will be another long road towards a championship, there’s no questioning that fact. But the Raptors are doing the right things, and all of these should pay off in the near future.