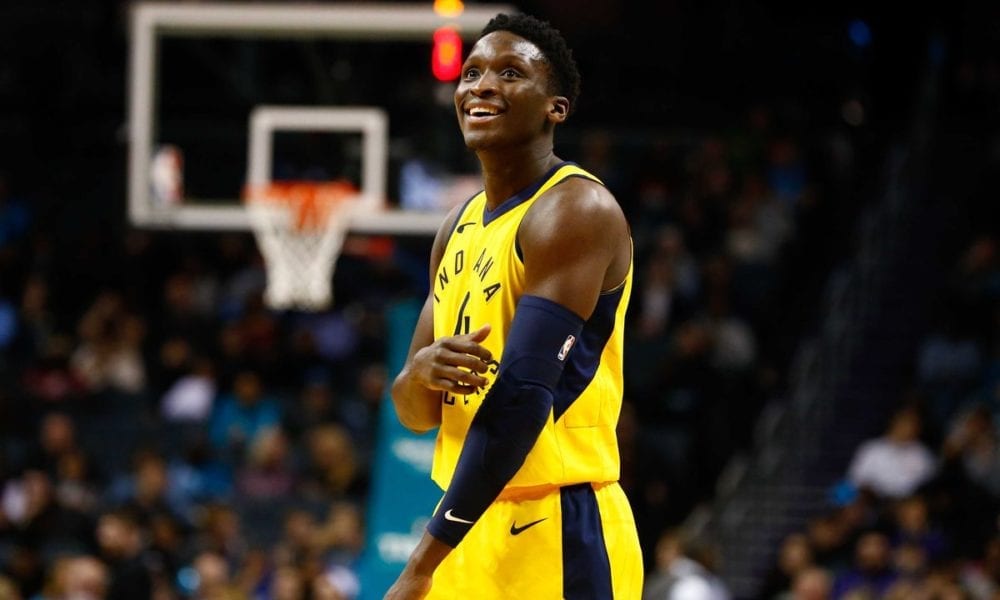 The Boston Celtics had a disappointing end to their 2020-21 NBA season, as they fell short of making the NBA Finals despite being tagged as favorites to come out of the East. With another failed campaign behind them, the Celtics might look to make significant moves in the offseason. This early, the green and white squad is being linked to Indiana Pacers All-Star guard Victor Oladipo.

According to Jared Weiss of The Athletic, Oladipo wants out of the Pacers in the offseason. If the rumors about him wanting out are true, several teams are expected to make a run at him despite having a sub-par performance this season because he was coming from an injury. In their four playoff games inside the NBA bubble, the 28-year-old guard averaged 17.8 points to go along with 3.3 rebounds and 2.5 assists per game.

Weiss said that the Celtics have a chance to shore up their roster if the Pacers make Oladipo available in trades. Boston will have to give up either Marcus Smart of Gordon Hayward to make room for Oladipo. But among the two possible trade chips, Hayward is the most ideal because he is also from Indiana, and Weiss thinks that adding draft picks in the package would make the Pacers agree to a deal.

"Hayward won’t be opting out of his contract unless he has a long-term extension in place, which will be hard for a 30-year-old with a concerning injury history," Weiss said. "Indiana is still home for the Haywards, and with Victor Oladipo looking to move on this offseason, according to sources, and Myles Turner possibly in the same boat, there could be an opportunity for Ainge to move Hayward and the abundance of draft picks in his war chest in a mutually agreeable way."

Before hurting his ankle in the first round of the 2020 NBA Playoffs, Hayward appears to be getting his groove back after struggling to recover from a previous foot injury. The 30-year-old forward played in 52 regular season games, where he averaged 17.5 points on 50.0 percent shooting from the field to go along with 6.7 rebounds and 4.1 assists per game for the Celtics.

According to Jay King of The Athletic, losing Hayward would hurt the Celtics because of his high efficiency and versatility. However, he pointed out that the because of Boston' increasingly expensive roster, the Celtics front office might have no other choice but to move him to a team willing to take his huge $34.2 million salary for next season to create cap space for the highly-anticipated 2021 free-agency period.

"Given the expected salary-cap landscape, most around the league believe Hayward will opt into the final season of his four-year contract for $34.2 million," King said. "Even if he does, the Celtics will eventually need to make a decision on whether to try keeping him long term. The current roster will grow plenty expensive over the years.  Hayward — though effective in his role — served as the fourth fiddle in the starting  lineup."

Chicago Bulls forward Lauri Markkanen is coming off a disappointing season, which fueled speculations that he could be moved elsewhere in the offseason. Markkanen was projected to make a big jump this season, but the opposite happened with most fans putting the blame on former Bulls head coach Jim Boylen. It came to a point where Markkanen would reportedly ask for a trade if the situation in Chicago does not improve.

"Make no mistake about it, third-year big man Lauri Markkanen was one unhappy camper before the coronavirus put the NBA on hiatus," Joe Cowley of the Chicago Sun-Timesreported in April. "Unhappy enough that if the direction of the organization was going to stay unchanged, he’d rather be elsewhere."

It is worth noting, though, that since the report came out, the Bulls have undergone a massive facelift. The Bulls cleaned up their previous front office and hired high-profile candidates. Chicago named Arturas Karsnisovas as the vice president of basketball operations and hired Marc Eversley as their new general manager. Not only that, Boylen is now out, and the Bulls have a new head coach in former Oklahoma City Thunder coach Billy Donovan.

Donovan's hiring came as a surprise because previous reports indicated that the Bulls are focused on hiring established assistants like Ime Udoka of the Philadelphia 76ers and Wes Unseld Jr. of the Denver Nuggets. The only candidate with coaching experience was former Brooklyn Nets head coach Kenny Atkinson. Donovan's hiring came out of nowhere, and several Bulls players, including Markkanen gave their stamp of approval to the move.

After hinting about a possible trade request, Markkanen now wants to stay in Chicago in the long run. The former seventh overall pick would become a restricted free agent next year, but he is not thinking about his contract situation. The Finnish forward said that he would let his agents work on his deal, as he is focused on becoming a better player for the Bulls in the years to come.

"I do want to stay in Chicago for the long term," Markkanen said via NBC Sports Chicago. "That’s my main goal, to hang out and try to build up relationships with the guys and get to play with them and get the chemistry going. I just worry about things I can control on the floor, and I’ll let other guys work on the contract stuff."

The 23-year-old forward averaged 14.7 points on top of 6.3 rebounds and 1.5 assists per game last season. During the 2018-19 season, Markkanen showed a lot of promise, as he posted 18.7 points and 9.0 rebounds. While his production went down this year, the former Arizona standout feels good about what is in store for them next season with Donovan leading the way for them.

"I do feel very confident going into this year," Markkanen said. "I think when you look at our team and the players on paper, we should have a really good team. I think the direction we’re going as an organization, I’m really confident going in. The experience that coach Donovan has to bring to the table, I think we’re going to be good."

No Big Trades in Sight for Chicago Bulls

The Bulls are expecting a lot of big things to come in the next several seasons. While most fans and analysts expect that the Bulls will be on a rebuild, GM Marc Eversley thinks otherwise. Eversley thinks that the current roster has the potential to become very good in the near future. Based on how Eversley views the current roster, it appears safe to say that their top guns like Markkanen, Zach LaVine, Coby White, and Wendell Carter Jr. will stay in Chicago.

"We've talked a lot about how this is not a rebuild," Eversley said. "We're looking to retool this thing and we think Billy Donovan is going to put us in a position to do that in the foreseeable future. So, yeah, there's a little bit of pressure in terms of responsibility of getting this franchise back to relevance, but we embrace that."

Eversley reiterated his belief that the current roster is better than the 22-win team that showed up this season. Arturas Karnisovas has also said before that they will focus on developing their current players. Eversley echoed the same statement, saying that they are determined to have an effective player development program. While he is unsure when they will peak, Eversley likes where they are at right now.

"I like a lot of the players on this roster. I think if we put together an efficient, effective  player development program, I think you will see a quick turnaround in terms of the output that these players give," Eversley said. "I don’t know if it’s going to be immediate, but they’re going to grow. We do have assets going forward in terms of the flexibility a year from now."

Talking about flexibility, the Bulls might have enough cap space to make a run at a marquee free agent in 2021. The 2021 free agency has the potential to become one of the most stacked market in recent history, as several superstars like LeBron James, Giannis Antetokounmpo, Anthony Davis, Kawhi Leonard, Paul George, Chris Paul, Blake Griffin, and Rudy Gobert could all become free agents after next season.

The Bulls have a chance to add another possible future cornerstone in the 2020 NBA Draft. From having the seventh-best odds to land the top pick, the Bulls had the luck of the draw, as they moved up to the fourth spot in the upcoming draft. There are no clear-cut favorites in the draft, which means the Bulls have a chance to nab Anthony Edwards, James Wiseman, LaMelo Ball, Deni Avdija, or Obi Toppin in the upcoming draft.

Chicago also had the 44th pick in the draft. While it is not too significant compared to their first-round selection, it is worth noting that Karnisovas has great history when it comes to second-round selection. When he was still with the Nuggets, Karnisovas drafted Nikola Jokic with the 41st pick in 2014 and picked Monte Morris 51st overall in 2017. Jokic has turned into a proven superstar, while Morris has developed into a productive bench player for Denver.