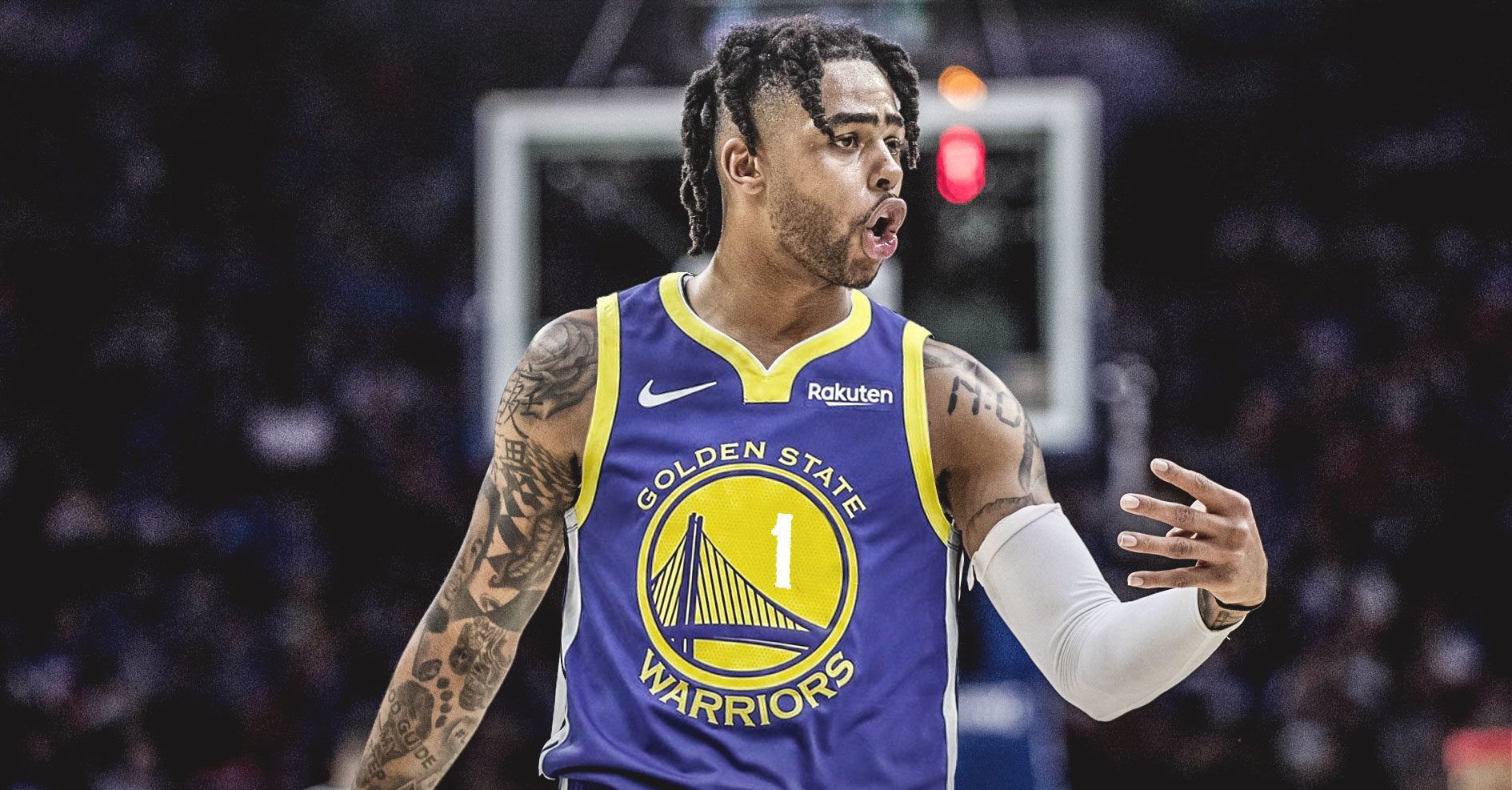 With star forward Kevin Durant officially agreeing to a four-year max contract with the Brooklyn Nets, the Golden State Warriors have started revamping their roster by acquiring All-Star point guard D’Angelo Russell. ESPN’s Adrian Wojnarowski was the first to report about this interesting development.

“Golden State and Brooklyn have agreed on a sign-and-trade, sending D’Angelo Russell to the Warriors on a four-year, $117M maximum contract, league sources tell ESPN.”

While Russell would be an intriguing piece for the Warriors, last season’s Western Conference champs will also lose an integral part of their team. In an effort to clear out cap space to sign Russell, the Warriors have to trade away veteran forward Andre Iguodala, costing them their defensive specialist in the process.

The Warriors also took in Shabazz Napier and Treveon Graham from the Nets, two players that they immediately traded to the Minnesota Timberwolves so that they will have enough financial flexibility to re-sign young budding center Kevon Looney. Recent reports say that the Warriors followed up the Russell deal by officially signing Looney to a three-year, $15 million contract.

Although the Warriors successfully retained All-Star gunner Klay Thompson by extending a max contract, Thompson’s recovery from the Torn ACL injury he sustained in the Finals will last for a whole year. Golden State needs another scorer to pair with Curry if they want to contend in the West, so getting D’Angelo could be an answer to that problem. Russell’s ability to create his own shots, as well as his excellent knack for dishing out perfectly-timed assists could be a fit for the Warriors’ pass-first system.

However, there are speculations that Russell’s tenure in Golden State won’t last long. Though Russell indeed packs a unique skill set, we are still not sure if he could blend well with the Warriors especially when Thompson comes back from his injury. If the Warriors succeed in entering the postseason next year, there’s a great chance that Klay will return. Marc Stein of the New York Times speculates that the Warriors’ greatest motive in acquiring Russell was to get a highly-valued asset that they could trade for a more complementary piece to their puzzle.

“This is all about the future. D’Angelo Russell doesn’t fit there whatsoever. They just wanted to make sure that they did not see Kevin Durant — arguably the best player  in the league when healthy — walk out the door for nothing. They got a 23-year-old All-Star and they will trade him. It’s just a matter of when. Do they keep him for a     whole season? Do they trade him at mid-season? Stephen Curry and Klay Thompson  aren’t going anywhere, so there isn’t room for D’Angelo.”

With Russell blossoming as a leader and top-tier scorer, there would be an abundance of suitors if the Warriors put him on the trading block. Durant developed his defensive instincts and rim-protection with the Warriors, and Iguodala has always been the team’s defensive stopper. Without those two key cogs, the Dubs would need a defensive-minded forward who could also effectively space out the floor on offense. If the Warriors indeed plan to trade Russell before the trade deadline, they would be looking for a player with those traits mentioned above.

The Miami Heat has acquired their new alpha dog post-Dwyane Wade era as they successfully pried two-way superstar Jimmy Butler from the Philadelphia 76ers via a sign-and-trade deal. The Heat engaged with the Sixers, the Portland Trail Blazers and the Los Angeles Clippers to complete a four-team trade centered upon the 29-year old superstar forward, per Anthony Chiang and Barry Jackson of the Miami Herald.

“When it was done, the Heat had traded away wing Josh Richardson to the 76ers, Hassan Whiteside to the Trail Blazers and a protected 2023 first-round pick to the Clippers to acquire Butler from 76ers and center Meyers Leonard from the Trail Blazers.

In addition to swapping Leonard for Whiteside, Portland also shipped forward Maurice Harkless, through the Heat, to the Clippers.”

With the deal, the Heat also absorbed stretch big man Meyers Leonard and shipped Whiteside to Portland. Both Leonard and Whiteside have expiring contracts by the end of next season. There were earlier reports saying that Heat starting point guard Goran Dragic was headed to the Dallas Mavericks as part of the Butler-Richardson trade, but that was soon etched out as a new report of a package of Kelly Olynyk and Derrick Jones Jr will replace Dragic in the deal.

However, Jackson points out that the Heat actually doesn’t want to include Jones in the deal, leading to the collapse of the trade. The high-flying combo forward was a consistent role player for the Heat last season, having averaged career-high numbers of 7.0 points and 4.0 rebounds per game while becoming a defensive specialist for the team.

“Can independently confirm that Mavericks want Derrick Jones Jr. and Heat has  said no. Miami could always change its mind or find another team with cap space to dump salary to satisfy cap requirements of Butler deal. Difficult to see Butler deal falling through at this point.”

With Miami already zeroed in on securing Butler, they turned their sights away from the Mavericks and successfully involved the Clippers and the Blazers in the deal. Another intriguing follow-up to the Butler trade is the fact that the Heat is now gauging the Wizards’ interest in trading Beal, per Miami Herald’s Barry Jackson.

“Per source in contact with one of the teams, Heat has engaged Washington in trade  talk. Miami loves Beal, who has said Wizards told him he won't be traded. Taking on Wall (in order to get Beal) & Beal would be highly challenging with cap situation,  even if Washington was willing.”

Still, the Wizards have been very adamant in retaining Beal next season. We still don’t know when star point guard John Wall will return to the hard court, so the Wizards are looking at Beal to lead them to contention. But the supporting cast around Beal isn’t that interesting either. Little by little, the Wizards have been rebuilding their roster by trading away wing players Otto Porter Jr and Kelly Oubre Jr last season. Back-up point guard Tomas Satoransky, who has proven that he can be a starter for any given team, was recently signed by the Chicago Bulls.

Furthermore, the Heat don’t have enough assets to entice the Wizards to give up Beal. They could flip Goran Dragic’s expiring contract for the Wiz to clear out cap space next season, and package that with a combination of Justise Winslow and Kelly Olynyk. Other than that, the Heat has already given away their most tradable asset in Josh Richardson in the Butler deal.

In exchange for Satoransky, Wojnarowski says that the Wizards will “receive some valuable draft considerations.” With Wall sustaining consecutive injuries that kept him out of most of last season, Satoransky emerged as the top point guard for Washington. He went on to norm career-high numbers of 8.9 points, 5.0 assists and 3.5 boards per game, along with a stellar three-point clip of 40%. The 6-foot-7 playmaker could find himself in a starting spot for the Bulls, while White continues to develop his skill set off the bench.

With the Bulls settling on White and Satoransky, young defensive point guard Kris Dunn could be on his way out. Sports Illustrated’s Jake Fisher reported that the Bulls are now actively in search for a trade partner for Dunn. The 25-year old combo guard, who the Bulls acquired when they traded Jimmy Butler to the Minnesota Timberwolves, averaged a decent stat line of 11.3 points, 6.0 assists, 4.1 rebounds and 1.5 steals per game. Dunn has also vastly improved his perimeter shooting, averaging 35% from beyond the arc last season.