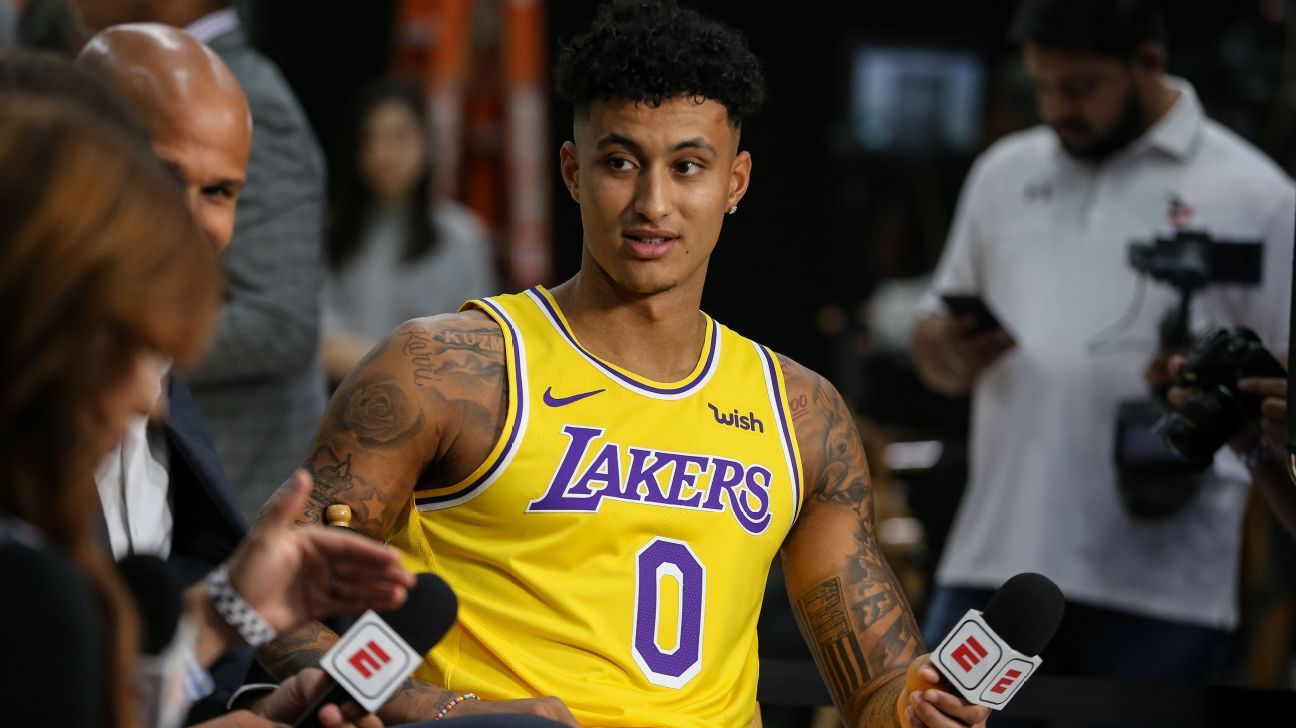 The headline for the Los Angeles Lakers last week was their acquisition of All-Star point guard Russell Westbrook, who now joins superstars LeBron James and Anthony Davis in Hollywood. The Lakers have been searching for a third star to create their own version of the Big 3, and they found that in the form of Westbrook’s elite skill set.

But lost in the headlines is the name of Kyle Kuzma, who is now in the Washington Wizards camp after the Lakers involved him in their trade package for Westbrook. After four years with the Lakers, this will be the first time that Kuzma is suiting up with a new uniform, and there is no doubt that he will have more playing time and an even bigger role in Washington.

Throughout his stay with the Lakers, Kuzma’s name has been involved in numerous trade speculations but none really materialized. In the massive multi-player deal that the Lakers pulled off two summers ago to land Davis from the New Orleans Pelicans, many people anticipated that Kuzma would also get traded. However, the Lakers kept him and shipped the likes of Lonzo Ball, Brandon Ingram, and Josh Hart instead.

It will be a brand new role for Kuzma, who is now set to have more playing time with the Wizards. In an exclusive interview with Tyler Conway of Bleacher Report last month, Kuzma chimed in his thoughts on the Lakers’ failure to defend their title last season, and also took the time to mention how consecutive injuries to the team’s key players played a role in them failing to make it past the first round of the playoffs. It was indeed disappointing considering that the Lakers were one of the favorites to bag the championship last season. Kuzma also gave a shout-out to Chris Paul and the Phoenix Suns, the same team that defeated them in the first round to go on all the way and win the Western Conference.

"A little bit of everything. Injuries throughout the season, changing roles, certain guys in the lineup, certain guys not in the lineup. The NBA season is already mentally draining, and when you have a lot of that, it just adds to it. If you look at all the teams that were in the bubble and played long, they had a lot of injuries. Look at Denver with Murray, even looking at the Heat this year how many injuries they had, along with us, too. Having AD out, Bron out, [Kentavious Caldwell-Pope] out a few games, [Alex] Caruso out a few games, a lot of people missed games, and I contribute that to the bubble.

If you think about the injuries from a player's perspective, it wasn't enough time for players to get their bodies ready. But at the same time, you gotta go out and compete and take care of your body. I'm definitely not complaining; they pay us a lot of money to go out there and compete. I saw them as a potential Finals team just off their chemistry. Last year with us, we had unbelievable chemistry and everybody kind of jelled and knew their role and had fun doing it, had fun playing with each other. I noticed playing them, that same type of feel. Everybody was communicating, talking, having fun, smiling with each other. Usually, when you have a team connected like that, you win big."

Kuzma, who is on his fifth year in the league, is coming off a season in which he put up a decent stat line of 12.9 points, 6.1 rebounds, 1.9 assists, 0.5 steals, and 0.6 blocks per contest. Moreover, he improved his three-point shooting percentage as he averaged a 36% clip from beyond the arc, which is highest in the past three years.

On top of all these numbers, Kuzma also embraced his role off the bench and thrived on the defensive end of the floor. While it is true that he has not exactly panned out as the borderline star scorer that many people expected him to be, Kuzma growth as a defensive player should not go unnoticed. He has learned how to use his 6-foot-9 length to his advantage, especially in hounding passing lanes and making his match-up work really hard just to get off a shot.

Kuzma, who was not a lottery pick in his draft class, erased all odds as he came up with a promising rookie year that catapulted him to the best young talent in the league during that time. He went on to have an even more solid sophomore year as he amassed a career-best 18.7 points, along with 5.5 rebounds and 2.5 assists. At that time, people said that it is only a matter of time until he becomes an All-Star, especially with all the promise that he showed in his first couple of seasons in the NBA.

However, LeBron and AD arrived in Los Angeles in 2019 and 2020, respectively. That took away Kuzma’s touches on offense, and he was eventually relegated to a bench role that forced him to assume a different value for the team. But while it was true that he did everything he could to help the Lakers win that 2020 NBA title, Kuzma still wants to have a consistent role and not have to bounce back and forth with different identities for his team. With the Wizards and their need for a credible scorer, Kuzma’s improvent in his shooting efficiency and shot selection will definitely land him a consistent role.

"My biggest thing is I just want to play within a consistent role. If I have that ability, I'll be able to showcase what I can really do. There were parts of this year—and even anywhere else in my career—when I'm in a consistent space, I'm out there handling the ball, making teammates better, scoring, shooting, defending, rebounding. I think if I'm in that space, I'll be good. I definitely can. I definitely believe that, too. I don't really care what nobody thinks or says. I know myself, and I know my ability. It's hard to be consistent in an inconsistent role. I'm excited for a more consistent space next year.

I've done a great job every offseason of trying to build something and add  something to my game. I've turned myself into a great defender. My rookie year, I  was a stop sign on defense. I didn't really stop anybody. Now, whether it's elite wings, 4 men, even point guards and shooting guards, I have the ability to guard four positions now and really affect the game on that end of the court. I'm working on my ball-handling so I'm able to get where I want on the court more efficiently and not necessarily be an in-the-corner type of shooter."

But of course, the Wizards front office did not just reel in Kuzma to their revamped roster. Along with Kuzma, the Wizards also received veteran shooting guard Kentavious Caldwell-Pope and former Sixth Man of the Year Montrezl Harrell from the Lakers. Both players can immediately contribute to any team, and there is no doubt that they will be a big part of how the Wizards will build their offense around All-Star shooting guard Bradley Beal.

Caldwell-Pope, who just turned 28 years of age last February, was a valuable cog in the Lakers’ successful championship run in 2020. He is a very dependable three-point shooter, characterized by his excellent 41% clip from the three-point line last season. On top of that, the Lakers trusted him to play good defense on the other end of the floor, helping him log in big minutes and even a starting spot in the Lakers’ rotation.

On the other hand, Harrell will provide much-needed scoring in the Wizards’ frontcourt. Harell, who won the Sixth Man of the Year during the 2019-20 season, averaged 18.6 points, 7.1 rebounds, 1.7 assists and 1.1 blocks per game in his final year with the Los Angeles Clippers. However, he signed a deal with the Lakers after that season, and then saw his playing time diminish. Harrell only logged in 22.9 minutes per game, although he still put up a decent stat line of 13.5 points, 6.2 rebounds, 1.1 assists, 0.7 steals, and 0.7 blocks per contest.

As per an article put up by NBA.com, Wizards general manager Tommy Sheppard pointed out that this multi-player trade paved the way for them to be better on the defensive end of the floor. It is indeed quite a good haul considering that they still get to retain the services of Bradley Beal, who many people thought could also be on the move sooner than later. Sheppard also took the time to thank Westbrook for the impact that he had on the franchise, even though their partnership only lasted for one year.

“We were clear as we moved into the offseason that we would be aggressive in making moves that would improve our defense, shooting and athleticism. Starting with hiring Coach Unseld, then moving to the draft and the acquisition of these five players via trade, we feel confident that we have made significant progress in those areas. Each player that we acquired in this trade addresses a need for us in addition to bringing experience, toughness and a winning attitude that makes them ideal fits around Bradley and the rest of our returning roster. Spencer’s athleticism allows him to score and make plays for others with Aaron’s hard-nosed style off the bench making a complementary pair of point guards. Kyle and KCP are proven three-and-D players with significant championship experience while Montrezl’s energy and effort personify the way we want to play every night.

Russell was a tremendous leader for us and watching him make history while with the Wizards was a privilege for me, our players and our fans that none of us will  ever forget. The impact he made on our franchise and our players in just one  season is remarkable and we wish him the best as he continues his Hall of Fame  career. We also appreciate Chandler for the work he put in during his time with us and extend him our encouragement as he progresses in his development.”

Along with the trade acquisition of Kuzma, Harrell and Caldwell-Pope, the Wizards also managed to nab the services of young point guard Aaron Holiday, upcoming rookie Isaiah Todd, and scoring point guard Spencer Dinwiddie. The Dinwiddie acquisition was the biggest thing as he replaces Westbrook’s position in the starting line-up, while giving Beal an excellent partner in the backcourt.

On top of all these, the Wizards front office also fired former head coach Scott Brooks and installed Wes Unseld Jr. at the top of the helm. Unseld, a notable player development coach, will assume his first go-around as an NBA head coach.