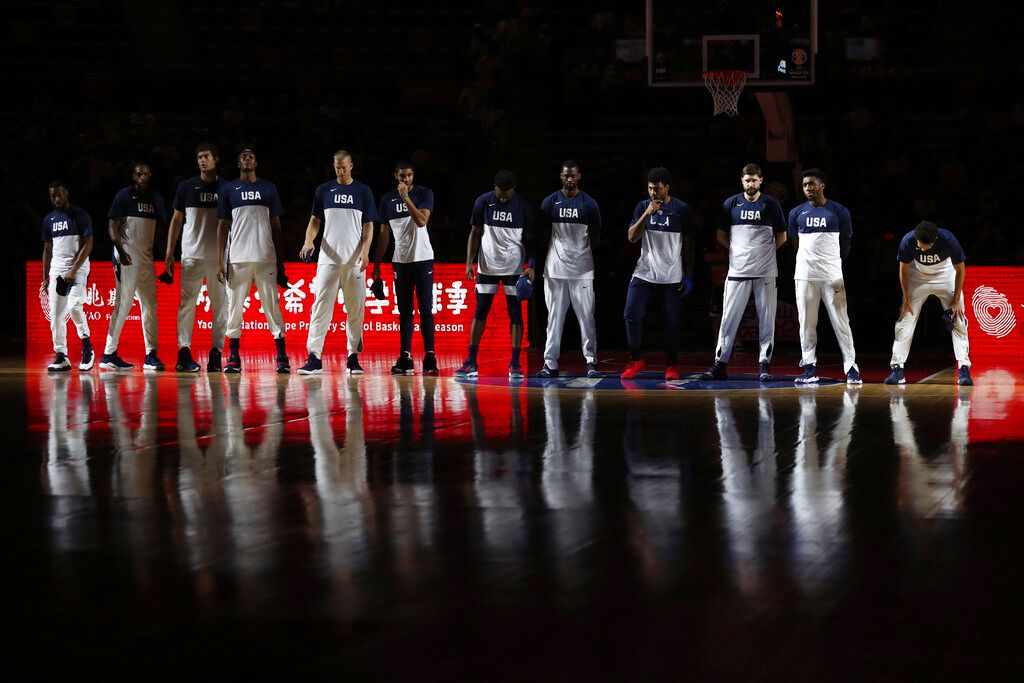 Could Team USA field a stronger cast in next year’s Olympics?

That’s the question being narrowed down to after Team USA’s stunning quarterfinal loss at the hands of Rudy Gobert and the Frenchmen. Even without the usual superstars like James Harden and LeBron James on their roster, the Americans were still pegged to be the favorites in this year’s FIBA World Cup. After all, they have the brilliant head coach Gregg Popovich taking the leadership mantle, while three-time NBA champion coach Steve Kerr plays the role of the assistant coach.

But international basketball is a brand new game. You can’t blame Popovich for not guiding his players to even a podium finish. It was obvious that most people believed that the Americans were in for a more difficult tournament than they usually had in the past. Their roster had a lot of loopholes. They didn’t have a true playmaker on the team, and Brooklyn Nets gunner Joe Harris was the only resident three-point shooter. Sure, athleticism was still present on the wing with Utah Jazz star Donovan Mitchell leading that area. But the other countries also had a lot of athletic wings on their respective teams. It sure looks like the world has caught up with the Americans in basketball.

Still, the booming problem for the national squad is the increasing number of superstars withdrawing from the duty. Of course, there are top-tier stars like Kevin Durant and Klay Thompson dealing with injuries. But most of the players pulling out from the camp pointed to their respective preparations for the upcoming NBA season as the main reason for their withdrawal. Jerry Colangelo, the managing director of the USA Basketball, reiterated his disappointment on these roster issues, per the Associated Press.

"I can only say, you can't help but notice and remember who you thought you were going to war with and who didn't show up. I'm a firm believer that you deal with the cards you're dealt. All we could have done, and we did it, is get the commitments  from a lot of players. So with that kind of a hand, you feel reasonably confident that you're going to be able to put a very good representative team on the court.

No one would have anticipated the pullouts that we had."

Aside from the painful loss against France in the knockout stage, the Americans were also on the verge of a group stage loss against Turkey. They were even supposed to lose that match, but Turkey missed four free throws in the waning seconds, leading to Khris Middleton’s two makes on the stripe. On top of that, the world’s most dominant basketball country didn’t romp over their opponents as they are used to. The only lopsided win they had was the victory against Rui Hachimura and the Japanese team. Their classification round loss against a Serbian team bannered by Denver Nuggets’ Nikola Jokic and Sacramento Kings’ Bogdan Bogdanovic didn’t help either. That defeat guaranteed them of their worst ever major tournament finish.

But despite all the criticisms that they received from fans all over the world, Kings’ combo forward Harrison Barnes says that the result may have been disappointing but he and his teammates have no regrets in the experience they went through at China, per the Associated Press.

Indeed, this was a sacrifice that each player and coach did put in for the call of the country. We can all recall the horrible injury that Paul George sustained while playing in the team’s scrimmage before the 2014 World Cup. The offseason was supposed to be a time for rest and preparations. The NBA season is not a joke – 82 games of it plus the playoff matches will really demand a lot from your body. The truth is, the mother teams of these superstars could arguably be discouraging them from playing for Team USA. You don’t want to pay a lucrative salary to someone who will risk himself to injuries and the wear-and-tear.

Still, Team USA fans should applaud the efforts of those who participated in the training camp. Boston Celtics defensive ace Marcus Smart played through an injury the whole tournament. His teammate and young rising star Jayson Tatum suffered an ankle injury in the Turkey game, but he’s still there high-fiving and getting up to cheer his teammates. Popovich, as stern as he is, couldn’t help but be impressed on how his players fought through adversity despite the lack of star power.

"I can't tell you how much I've been impressed the whole time with their character,  their stick-to-itiveness and their persistence as they're learning how to play together. Tonight was a great example of that."

The Americans still have another game to play in the tournament. They will face Poland for the 7th place match on Saturday.

Can this version of the Houston Rockets team be more successful this time around? Team owner Tilman Fertitta is surely banking on that. Aside from the blockbuster trade that saw them let go of Chris Paul in exchange for the more athletic point guard Russell Westbrook, the Rockets basically kept their core intact. For now, the Westbrook arrival is still an experiment and we might need to wait until the playoffs to see if it works.

But the important thing to remember is that the team isn’t getting any younger. Russ and scoring wing Eric Gordon are both approaching the last years of their peak, not to mention that their defensive ace in PJ Tucker is already 34 years old. James Harden is still at the young side of 30, but that could change after a couple more postseason runs on his mileage. That is the main reason why Fertitta told Yahoo Sports’ Chris Haynes that their championship window is slowly closing.

"I think we put ourselves in the position that if we don't win it in the next three or four years, we probably aren't going to win one in the next 10 years. This is our window, and we need to seize the opportunity.

This is the time. I just re-signed Eric Gordon who is 30 and I've got Russell and   James and Eric and Clint Capela for the next four years. P.J. [Tucker] is 34 and our two stars are 30. So this is their window. Let's seize the opportunity."

It still remains to be seen if the Rockets front office will also extend Tucker’s contract in light of the latter publicly saying that he deserves one. Tucker has grown to become today’s prototype forward that can also play the center role if necessary. An excellent 38% three-point shooter, Tucker’s greatest assets lie on the defensive end where he could guard all positions. That would explain why Tucker logged in the most minutes (34.2 mpg) in his career.

As for the roster depth of the Rockets, that remains a weak spot. Houston has a solid five – Westbrook, Harden, Gordon, Tucker and Capela. But after those five players, the team doesn’t have a really solid contributor off the bench. Of course, they could always slot in Gordon to the second unit but the 30-year old vet will still be forced to log in massive minutes in the regular season. Austin Rivers can create shots for himself, but that comes with multiple turnovers and questionable shot choices. Newly-acquired defensive big man Tyson Chandler will definitely be a boost on both ends of the floor, but the 36-year old can only appear in limited minutes. They have decent shooters in Gerald Green and Danuel House, but are they enough insurance in case Russ and Harden sustain injuries?

Indeed, the time is now for the Rockets. They could always gauge the free agency market for quality vets to add to their depth, but another disappointing playoff run should cost the franchise a lot of problems moving forward.

Zaza Pachulia, a two-time champion with the Golden State Warriors, have come back to the team. The veteran center will now be fulfilling the consultant role for the Dubs, after the promotion of Mike Dunleavy Jr to the assistant general manager position. Pachulia was a winning presence for the Warriors squad, providing the intangibles and brawns on both ends of the floor. His underrated ability to dish out accurate assists also tells us a lot about his basketball IQ, an asset that encouraged the Warriors front office to hire him.

During an interview with Logan Murdock of the NBC Sports Bay Area, Pachulia can’t help but be excited on coming back and helping the coaching staff to guide the Warriors’ new, young players.

"It's great to be back. So many familiar faces. ... Today's my first day in the office in my new job, so I'm very excited.

I was taking a tour around the Chase Center the other day and went to the locker room and there are a lot of younger guys ... and a perfect opportunity for them to prove ... to show themselves. It's going to be an interesting year. They have a great coaching staff -- one of the best in the business -- and I'm sure coach [Steve] Kerr will use those players in the right way."

Pachulia played 16 seasons in the NBA, and last appeared for the Detroit Pistons last year. The big man from Georgia has career averages of 6.8 points, 5.8 rebounds, and 1.3 assists per contest.