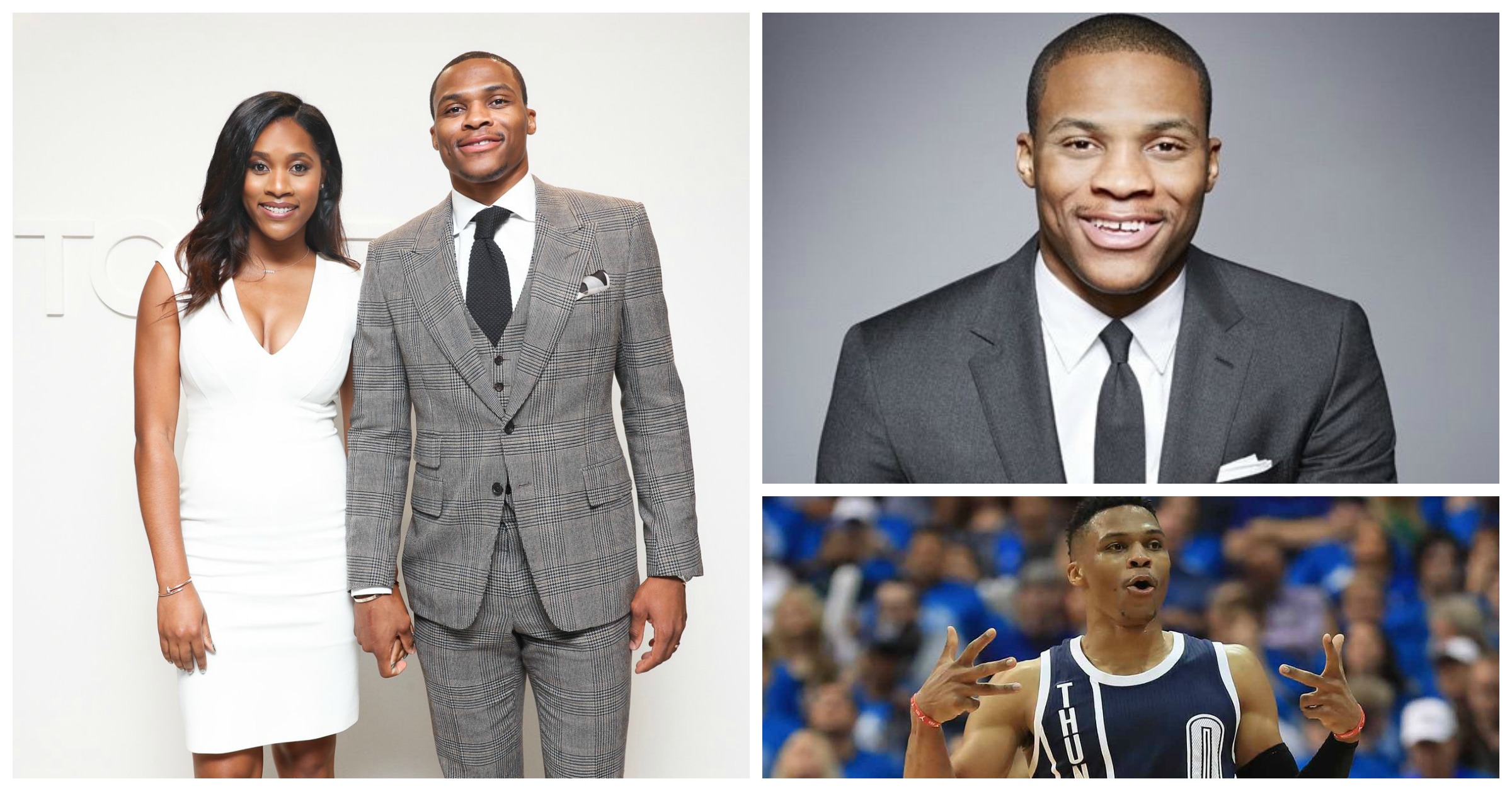 History was never going to be denied.

The legendary Oscar Robertson held two of the most seemingly unbreakable records in the history of NBA: 41 triple doubles in one season and a triple double average in a single season. Russell Westbrook broke both in a season for the ages. But for Westbrook, it wasn’t just breaking the records. It was how he did it and the circumstances around it.

The story of Westbrook’s historic season began with Kevin Durant abandoning Westbrook and the OKC Thunder for greener ( or should I say golden ) pastures in the Bay Area. Durant hit the free agency market last July and signed with the Golden State Warriors. Durant’s reason was simple: He wanted to win an NBA title.

One season back, Durant and Westbrook led the Thunder to a 3-1 series lead over the Warriors in the 2016 Western Conference Finals. They blew the lead and the Warriors went on to face the Cleveland Cavaliers in the Finals. Instead of coming back for vengeance the following season, Durant left the team that called him its leader in favor of a former champion team which was really offensively loaded even without him. The result? The Warriors became overwhelming favorites to win the title. And sure enough, they did by manslaughtering LeBron and his Cavs 4-1 in the just concluded 2017 NBA Finals.

While Durant was basking in his new found glory, Westbrook took the cudgels in Oklahoma City. Left on his own, Brodie literally carried the team on his broad shoulders and led them to an improbable playoff run. The Thunder finished with the 6th best record in the West, despite losing Durant in the offseason. The reason was Westbrook and his historic triple double season.

At the 2017 NBA Awards Show, Russell Westbrook’s historic season was given its due recognition. Then came the speech. Westbrook thanked those who supported him. He called up his teammates. He thanked his parents. He was emotional when he spoke about his brother. For a moment there, we thought he was going to borrow Kevin Durant’s famous line of ‘You the real MVP’. But no, he didn’t. There wasn’t a line in his speech as memorable as that. But it was just as heartfelt and emotional as KD’s own MVP acceptance two years ago. It was Russell Westbrook speaking from the heart.

In case you missed it, we have it. We could have pasted the video, but it’s better to read out the words to get a better feel. Here is the FULL transcript of Russell Westbrook’s MVP acceptance speech:

“I can’t hold this ( gives his MVP trophy to Adam Silver ). I’ve got some people I want to thank.
“First and foremost, thank you to the man above. Without his blessing, without his honor, I wouldn’t be standing here today. Thank him. I’m very, very blessed to be in the position I am today, so I’m very appreciative of that.
“First, I want to thank the organization. Mr. (Clay) Bennett, Sam (Presti), coach (Billy Donovan), Weav (Troy Weaver), coach (Maurice) Cheeks, I appreciate you guys believing in my, drafting me No. 4 when nobody thought that was a great decision, so I definitely appreciate that. I’ve got a long list of people in Oklahoma I want to thank. I want to thank all the film guys, all the team doctors, the trainers, the massage therapists, the strength and conditioning staff, the equipment team, the front office, the business office, the chefs, the support staff at the arena, at the building, the PR team, just everybody in Oklahoma City that helped me to go out and compete at a high level every single night. I’m very, very thankful. You guys are great. I’m very appreciative of you guys’ help, so thank you.

“Next, I want to thank my teammates. If y’all won’t mind, you guys would come up here, I’d appreciate that. Vic, Dre, Enes, Nick, Taj, my teammates. Alright, alright, alright, y’all looking good. My guys, man. Obviously, all of the guys they’re not here tonight, but these are my brothers, man. These guys sacrificed so much for me throughout the year. It was obviously an amazing season for me, but without these guys, the rest of our guys that’s not here, none of this would be possible. This award is not for me, it’s for all of you guys, and I’m very, very thankful to have you guys in my corner. You guys are my brothers for life, and I just thank you guys and love all you guys, so thank you.

“I want to thank the NBA as well. I never thought I’d be saying this up here today, but I want to thank the media for voting for me. But seriously, thank you guys for voting for me. I’m very, very appreciative. I feel like I go out every night and compete at a very high level and I’m thankful for you guys noticing that, so thank you.
“To the fans: I want to thank all the fans all across the world just for supporting me throughout my career. I’m very appreciative of that as well. But I want to give a special thanks to all the fans in Oklahoma City. You guys have been riding with me since Day 1, you guys have been riding with me through the good games, the bad games, always there lifting me up, and I’m just so thankful for all the fans there, so thank you guys.

“I want to thank my agency, my agent and my team. You guys do an amazing job of sacrificing everything you do to make sure I’m able to go out and play at a high level. I want to thank you guys and I’m very appreciative of you guys to be on my team, so thank you.

“And lastly, I want to thank my family. Without you guys, I don’t know where I would be. I can’t be standing here without your support, your sacrifice, everything you’ve done for me, starting with my parents. Let’s give them a round of applause, please.

“My parents….man. You guys did any and everything to make sure me and my brother had anything we wanted. I told myself I wasn’t gonna cry but …..

“I can’t say thank you enough. You guys sacrificed everything. Pops, OG, working two jobs, getting me up at 4 in the morning, waking me up, every night going to the gym, shooting hoops outside, staying up late playing the video games. .… To my mom doing everything to keep our family together. I’m truly blessed to have you as my mother. You’re so amazing. I couldn’t be able to do none of this without you guys. I can’t say thank you enough. There’s so many things I could say about you guys for putting me here. I’m just thankful for having you guys in my corner. I love you guys.
“To my little brother, my roll dog. You mean so much to me. You’re my role model. I look up to. I truly look up to you. You’re amazed and blessed. I’m so happy to have you as my brother. I wouldn’t trade it for anything in the world. A lot of you guys may not know, but my brother just got his masters two weeks ago. I’m so proud of him, not just for that but the man he is today. He lifts me up every single day. My brother, he texts me every single game at halftime. Every game. Since I’ve been in the league he texts me every game at halftime. He don’t got to do that, but he does that because he’s got a kind heart and he looks out for me. I love you from the bottom of my heart, brother. I promise you I appreciate everything you do for me. I love you brother.

“Lastly, my beautiful wife. Since Day 1, meeting you 2007 back in UCLA, I knew you were special. You make me go. You hold me down. You keep me in check through good and through bad. You make sure I’m on the right track and I’m so appreciative of you because so sacrifice so, so much for me every single day and I can’t thank you enough. As a wife in this league, to be able to sacrifice some of the things you sacrifice and everything that you do, I can’t put it in words and describe how thankful I am to have you in my life. You’ve blessed me with a beautiful son that I’m so thankful for. You continue to make me go. Every time I come home I just, regardless of a good or bad game, every time I see your face I just smile. It does nothing but brighten me up. I just want to say I love you and I thank you for everything you’ve done for me thus far. You’re the best wife a husband like me could ask for and I love you, Sugar. Love you very much.

Given that Westbrook’s speech came after the tear-jerking Sager Strong Award given to Westbrook’s former assistant coach Monty Williams and that it came at the end of a more than two hours show, Westbrook’s heartfelt acceptance speech was just as impressive as his season was. Real MVP indeed!