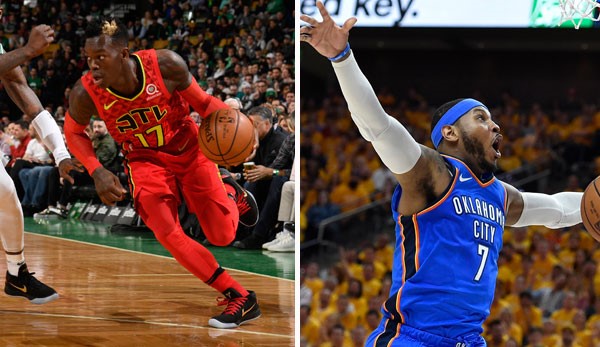 After weeks of speculation, Carmelo Anthony is out of Oklahoma City.

The Thunder announced on Friday that they have traded the 34 year old forward to the Atlanta Hawks. Under the agreement, OKC sends Anthony and a 2022 first round pick to the Hawks for point guard Dennis Schroeder and big man Mike Muscala.

The 2022 pick is Top 1-14 protected and will be converted to two second round picks if not conveyed in the first year. As part of the deal, Muscala will be dealt to the Philadelphia 76ers for Timothe Luwawu-Cabarrot while the Sixers will send Justin Anderson to the Hawks.

It can be recalled that Anthony opted in to the final year of his contract worth $27.9M for the 2018-19 NBA season. But with the Thunder expected to move forward without Anthony, his exit was being talked about in recent weeks. League sources say that the Hawks will then waive Anthony so he can freely sign with a team he chooses.

As for the Hawks, Atlanta traded down in the 2018 NBA Draft to acquire point guard Trae Young, the first player in NCAA history to lead the nation in both points and assists in the same season. The Hawks also acquired veteran point guard Jeremy Lin in a recent trade.

With Young and Lin in Town, it was academic that Schroeder would get booted out sooner or later. The Hawks are undergoing a massive facelift and obviously Schroeder isn’t part of their future. Schroeder also hinted after last season that he wanted to play elsewhere so it’s probably good riddance for the Hawks.

Anthony isn’t part of the Hawks’ plans either. Rather than pay Schroeder for three more seasons, they saved some money in acquiring Anthony whose remaining salary is around $17M lesser than what they would have owed Schroeder for the next three seasons. 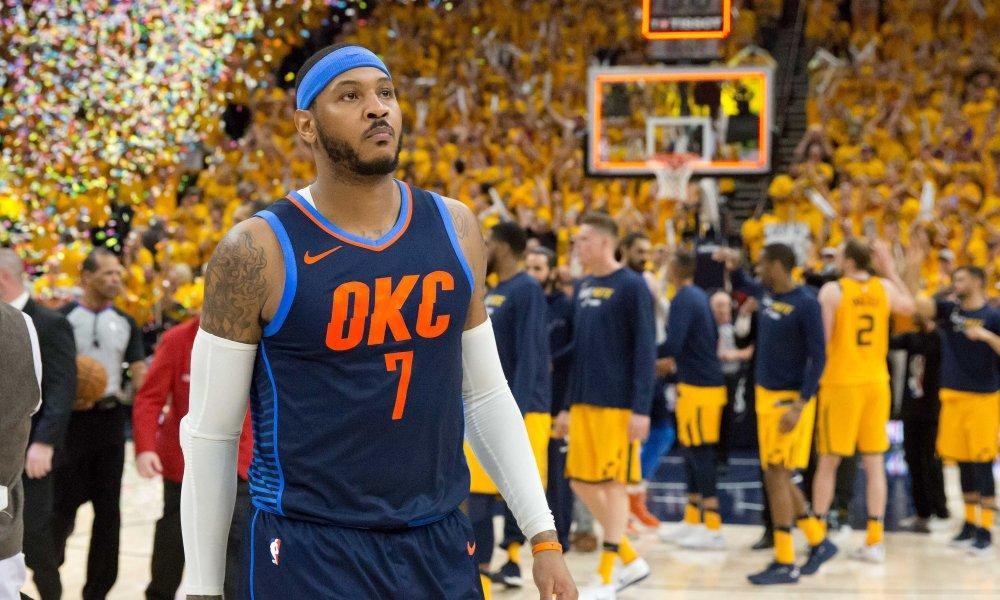 The Thunder dealt big man Enes Kanter, shooting guard Doug McDermott and a future draft pick in order to add Carmelo Anthony to their line-up last season. Anthony was the second All-Star acquisition by Sam Presti last season after shooting guard Paul George. Supposedly, the trio of Westbrook, George and Anthony would have provided the Thunder with a three headed monster on offense. But while George fit in nicely, Anthony struggled mightily in Oklahoma City.

Anthony accepted a new role in OKC. He was asked to play from his natural small forward position to being a stretch four in small line-ups. It took a lot of time for Anthony to adapt (if he ever did) and he never really felt comfortable taking catch and shoot three pointers as a stretch four.

The longer the season went, the more Anthony became a liability. And during the Thunder’s first round series with the Utah Jazz, Melo’s role was dramatically decreased. Anthony averaged only 11.8 points per game in the series, shot the ball at 37.5% from the field and 21.4% from the free throw line. During Game 6 where the Jazz clinched the series, Anthony played just a total of 26 minutes and only 3 in the payoff period.

It was clear after the end of the season that Anthony didn’t fit with the Thunder and their plans. However, because Melo had a $27.9M player option in his existing contract, Anthony was expected to return to the Thunder because with his 2017-18 performance, he wasn’t going to get the same amount of money if he opted out and tested the free agent market.

Carmelo Anthony returning was one thing. Finding out what to do with him was another. By the time he opted in, everyone knew that Anthony was never going to play for the Thunder again, not after how pe performed last season. The best option for Melo would be to waive and stretch Anthony’s $27.9M salary.

Under that provision, the Thunder would pay Anthony’s balance on a staggered basis and in Anthony’s case, it would have been a $9M per annum. Had the Thunder used the stretch and waive provision on Anthony, the would have saved $107M in luxury tax payments. In acquiring Schroeder and Muscala, the Thunder don’t save as much but they will still be able to reduce their luxury tax bill significantly.

With Schroeder and Muscala absorbed, the Thunder’s payroll now stands at $148M. Their projected luxury tax of $150M (before the Melo trade) will be reduced to around $88M, saving them some $62M in payments at the end of the calendar year. OKC also stands to save an additional $11M from Schroeder’s contract.

Schroeder has three years left in his existing contract and will be owed $15.5M per annum. Considering that it would have cost the Thunder $9M per year for the next three season had they used the waive and stretch provision on Melo, the Thunder are in essence just paying $5M per year to add a 24 year old point guard who has started a total of 161 games in five NBA seasons. That sound like a bargain, really. 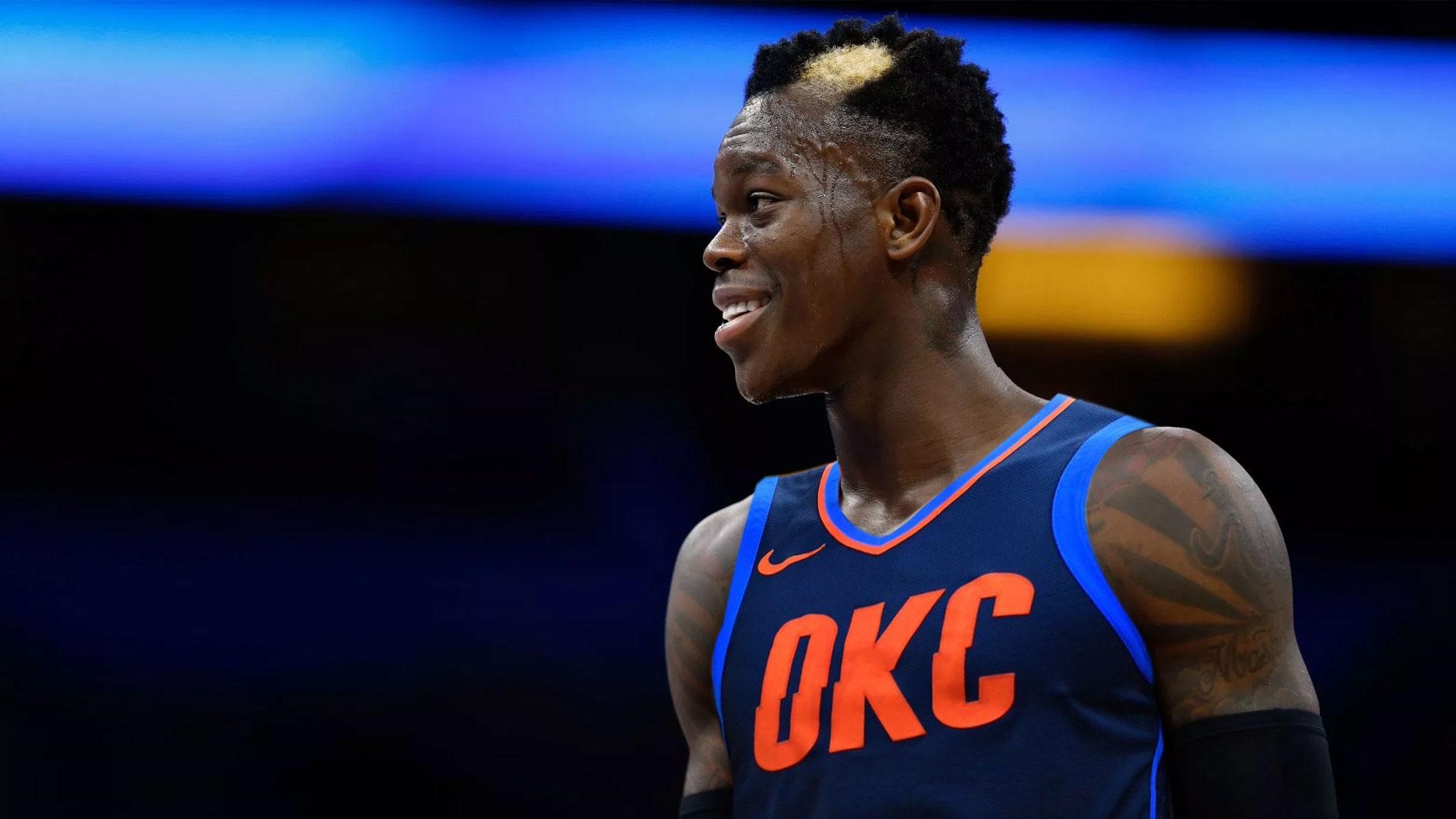 According to Synergy Basketball, Schroeder “ranked 6th in the NBA creating, assisting, or scoring 17.2 points per game out of the pick & roll season, just behind Russell Westbrook, who finished 5th at 19.9 per game.” This is great news for the Thunder who will now have a back-up point guard who was almost as productive as Westbrook was in the pick and roll. That’s not it.

Schroeder also averaged 1.09 points per possession on isolation plays last season. Among NBA players who had at least 100 isolation opportunities, Schroeder ranked first in field goal percentage at 48.9%. Likewise, Schroeder converted on 50.9% of the 216 isolation plays ran for him. That was the second highest percentage in the league last season, with only 2018 NBA MVP James Harden having a better conversion rate.

The Thunder offense was very predictable last season, especially in the playoffs. The Utah Jazz only needed to guard Westbrook, Paul George and Anthony to shut down the OKC offense. But with a scoring point guard like Dennis Schroeder, the Thunder add more offensive muscle and plenty of NBA experience off the bench. 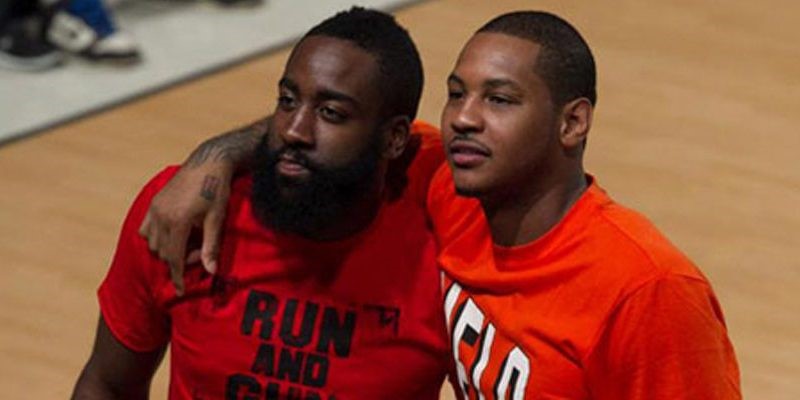 NBA rumors suggest that Anthony will subsequently be waived by the Hawks and he will become a free agent. There have been several teams linked to Anthony even before this trade was consummated but the latest rumblings are pointing to Anthony going to the Houston Rockets where he will join banana boat brother Chris Paul.

The Miami Heat were among the reported front runners for Anthony but after the team met with Melo and his representatives, both camps could not reach an agreement. It was reported that the role and contract that Anthony was looking for did not fit well with what they wanted.

It can be recalled that even when he was with the Thunder, Anthony was resistant to taking a role off the bench. Sure, Anthony is a well decorated NBA All-star, but given his age and the way the game has evolved over the years, his elbow one on one isolations have become less and less significant in today’s game.

The Rockets will surely have more firepower with Anthony’s addition although he won’t compensate for the loss of Trevor Ariza and Luc Mbah Moute. Mike D’Antoni is a coach who has done wonders with player experiments(Harden as PG and Harden and CP3) and Rockets’ fans are hopeful he can do the same with Melo. However, integrating Anthony’s ego to the team could pose some challenges for Houston.