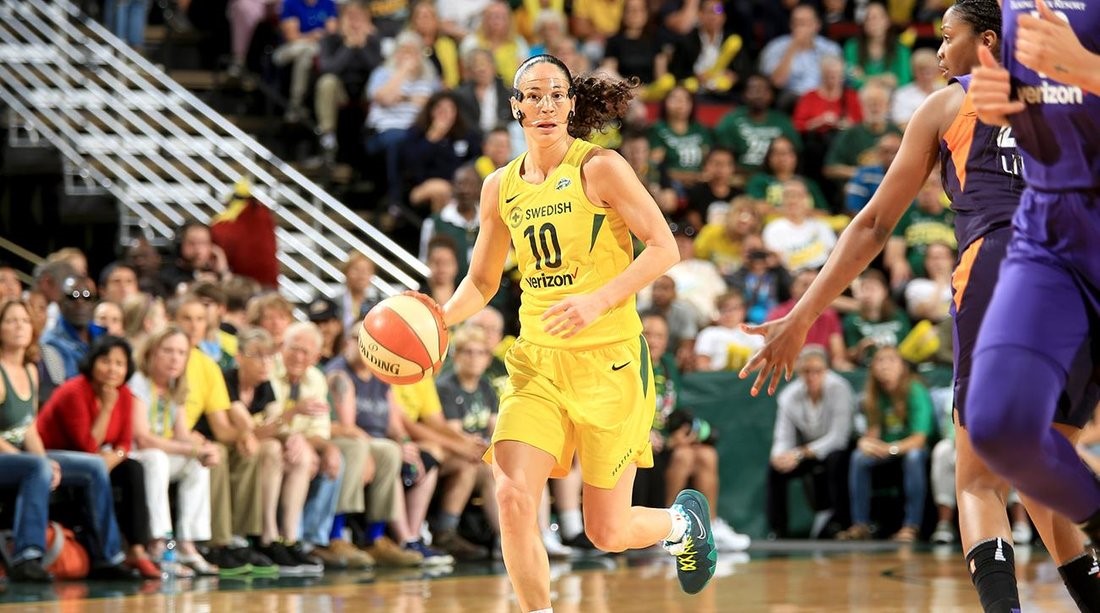 The bigger the moment, the better Diana Taurasi plays. That had been the case for 13 consecutive winner take all games that the Phoenix Mercury had played in.On Tuesday night though, Sue Bird made sure the streak would end.

Recently named 2018 WNBA MVP Breanna Stewart led Seattle with a game high 28 points. Stewart carried the Storm in the first three quarters of the game but it was Bird who took over when the game and their season was on the line. The longest tenured Storm player
scored 22 points on 8-18 shooting including 5-11 from behind the three point line as the Seattle Storm beat the Phoenix Mercury 94-84 in Game 5 of their semifinals series to advance to the 2018 WNBA Finals.

Wearing a protective face mask after suffering a broken nose in the previous game, Bird finished strong after a slow start to help the Storm get the victory. Midway through the final period, Bird made three straight jumpers, including two three pointers before adding another three pointer with 2:51 left in the game to give Seattle a comfortable 84-76 lead.

Playing with a broken nose in Game 5 was nothing new to the tough as nails Storm guard. Bird had played with one in four previous instances during his career, including three times in the WNBA. Neither was Bird alien to wearing a protective mask. She has a 20-15 record, including 6-5 in the playoffs wearing that protective gear. 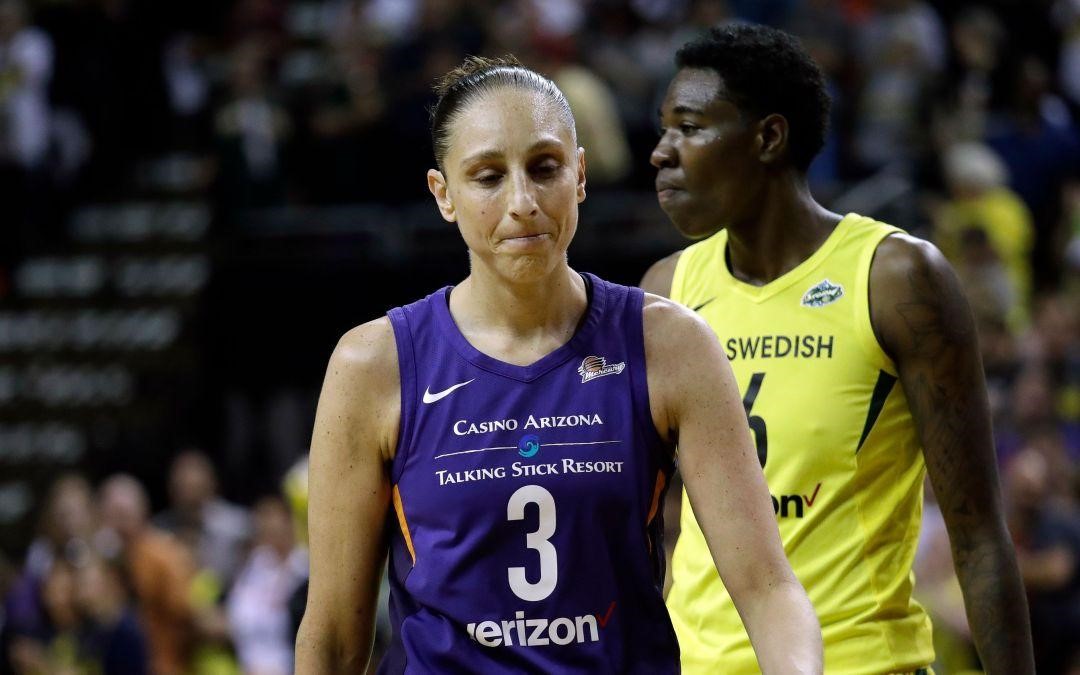 With the victory, Bird gave her good friend and former college teammate Diana Taurasi her first loss in a winner take all game. Prior to Tuesday, Taurasi had an incredible streak of thirteen consecutive victories in games where her team advances to the next playoff round or gets eliminated. That’s correct, prior to Game 5 against the Seattle Storm on Tuesday, Diana Taurasi had not lost a Game 3, Game 5 or single game playoff elimination games. And she had won seven of them on the road. Cold blooded, really.

To put that in perspective, LeBron James-the man regarded as the best basketball player today, is 6-2 in those situations. During the previous NBA season, James led the Cleveland Cavaliers to wins in Game 6 & 7 against the Boston Celtics in the 2018 Eastern Conference Finals. Lakers’ all-time great Kobe Bryant retired with a 6-1 record in do or die playoff games. Michael Jordan, one of the men considered in basketball’s GOAT conversation is 4-1 in those games.

Even with her first loss on Tuesday, Taurasi’s record is now 13-1 or a winning percentage of .930. That’s still better than LeBron, Kobe and Jordan’s or even the three of them combined. Only one other basketball player in the history of the game has a better record than Taurasi and that is the legendary Bill Russell. The Celtic icon is 21-0 in winner take all games and that includes NCAA Games, Olympic games, Best of 5s and Best of 7s. That speaks a lot about the GOAT conversation. But that’s another story though.

Going back to Taurasi, she improved to 13-0 last month after leading the Mercury to a 96-86 win over the Connecticut Sun in the single game elimination round of the 2018 WNBA Playoffs. The 36 year old Taurasi scored a game high 27 points while shooting 5-10 from behind the three point area and dishing off a team high 5 assists to win on the road.
After the win, the Mercury entered their semifinal series against the Seattle Storm as underdogs. That proved to be the case as the Storm raced out to a 2-0 series lead before the Mercury came back to win the next two games to send the series to a winner take all Game 5.

That opened the door for another opportunity for the immortal Taurasi to win yet another do or die game. But it was not meant to be this time around as Bird scored 14 of her 22 points in the final period to shut the door on the Mercury and lead the Storm to the 2018 WNBA Finals against the Washington Mystics. Taurasi gave praise to her UConn teammate:

"Probably one of the best little stints of basketball I've seen her play. But that's what she can do," Taurasi said. "She can probably do that more often. But she's the consummate point guard. She always wants to get everyone else involved. That's routine Sue to me. But it was incredible really, just an incredible performance by her."

At one point in the game, Bird missed eight consecutive shots plus the Mercury took an early 11 point lead against the Storm. But during a five minute stretch in the fourth quarter, Bird made five out of six shots to give Seattle its third Finals appearance in franchise history. Being the longest tenured player in the team, Sue Bird was in both Finals appearance and she helped the Storm win the WNBA title on both occasions. It remains to be seen if she can lead them to a third title but this game was special to her:

"This is up there," Bird said. "I don't know that I've had a fourth quarter like this in as big of a game in my life."

"To be here now in some ways is probably sweeter than the other two just because I didn't think it was going to happen. But here we are."

Bird has 16 WNBA seasons under her belt, all with the Storm. At age 37, she’s pretty much won almost everything at every level: 4 Euroleague titles, 2 Europe Super Cup titles, 2 NCAA championships 2 WNBA championships and 4 Olympic gold medals. She’s still on top of her game and has no plans of retiring yet but given her age, after undergoing arthroscopic surgery on her left knee during the previous WNBA season and knowing the last time the Storm won it all was eight years ago, this could very well be her last shot at glory.

As for Diana Taurasi, her streak may have ended on Tuesday but she still ranks among the greatest in terms of big game performances and victories. The WNBA’s all-time scoring leader has slowed down a bit in the last couple of years but she still proved this season that she can still bring it in big games. It just so happened that it wasn’t meant to be on Tuesday night.