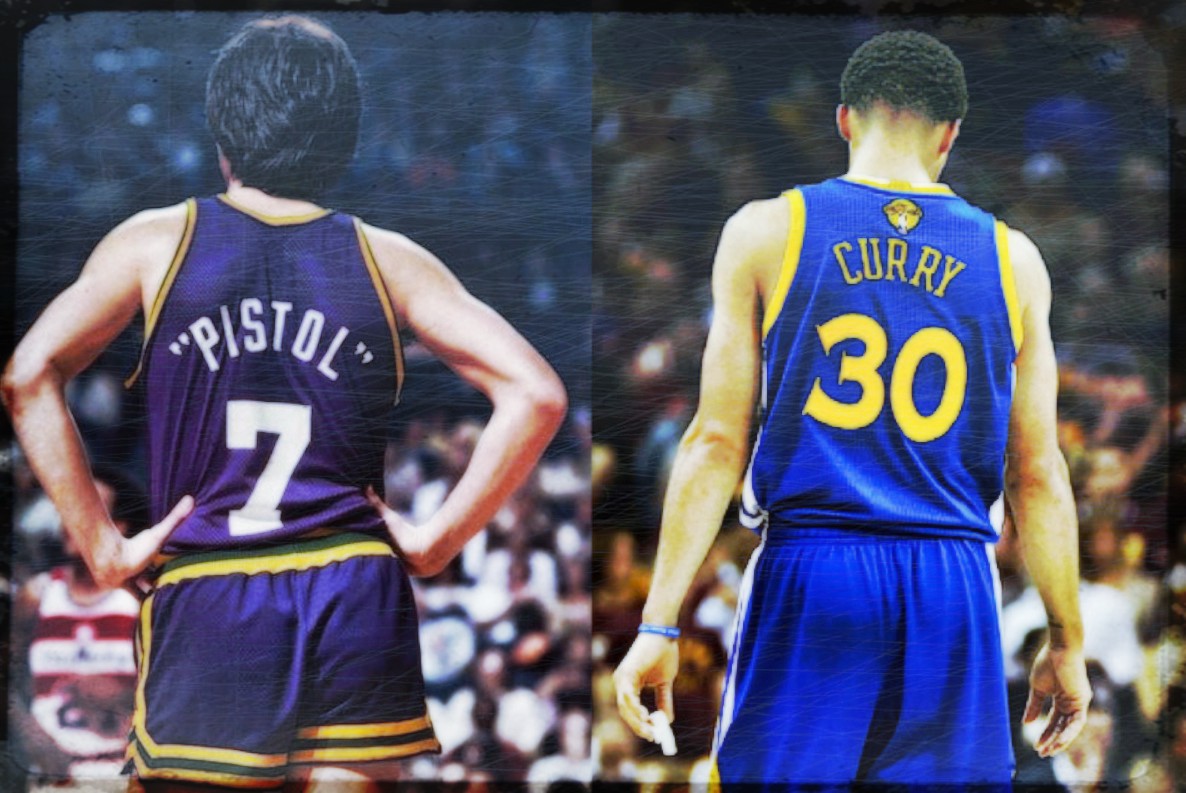 Ever since he was in college, Stephen Curry has been compared to the great Pete Maravich. The main reason for the comparison is Curry’s ability as a pure scorer. Curry led the nation in scoring during his final season at Davidson and his scoring outbursts were often likened to the ones produced by the man they called Pistol in the 60’s.

Maravich led the nation in scoring in each of his three seasons at LSU. The Pistol is considered as one of the greatest offensive talents the game of basketball has ever seen. No one has been able to score in college like Pistol Pete did, not even Stephen Curry.

When he played in the NBA though, it became a different story. While Maravich led the NBA in scoring once in his career, he never averaged the same ridiculous numbers in the big league. Still, he was one of the best scorers of his era.

Curry meanwhile is one of the NBA’s top gunners. He and backcourt partner Klay Thompson have been dubbed as the Splash Brothers because of their ability to put points on the board. Curry is considered as one of the greatest shooters ever ( if not the greatest ), given his range and accuracy. But is he the better scorer than Pete Maravich?

Stephen Curry is the best pure shooter today and is perhaps the best we've seen in this generation. But before we put him on the same NCAA pedestal as Pete Maravich, let us remember first that that back in the 1960's, college basketball had a different rule book.

If you watch Pistol Pete's highlights at Louisiana State, notice that there is no three point arc on the basketball court. Yep, every basket that Maravich scored was just worth two points, whether he shot the ball from 20, 30 to even 40 feet away from the hoop.

The absence of the three point line didn't stop Pete Maravich from hoisting up long distance bombs. He just kept on shooting the leather and scored almost at will. Given that he averaged 44.2 points per game at LSU, we can only imagine what his scoring average would've been had there been a three point line back then. 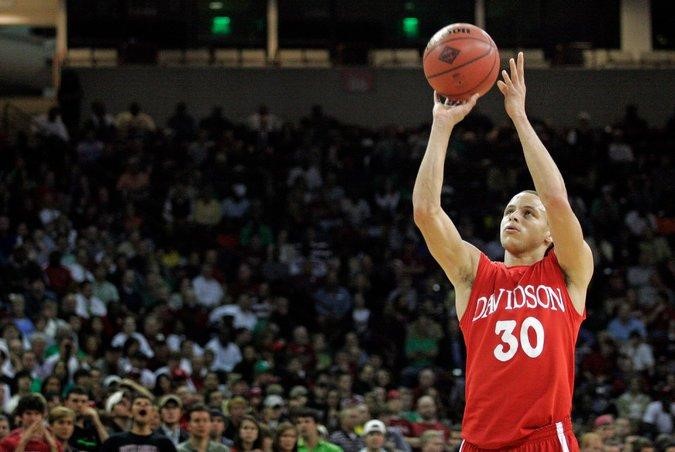 On the other hand, Stephen Curry thrived with the three point shot. In three seasons at Davidson, Curry averaged 4.0 three pointers made per game. Considering he averaged just 4.4 two point makes per outing, Curry virtually lived by the three pointer. 54% of his shot attempts per game were from beyond the arc, and with him making .412 of his trifectas, he became a super scorer in college.

This bring us to our next point. Even with he three point line, Stephen Curry 'only' averaged 25.3 points per game during his collegiate career. We said 'only' because Pete Maravich averaged an astounding 44.2 points per game during his three years at LSU. That's almost a 20 point scoring difference per game in favor of Pistol Pete, and without the benefit of the three point line at that.

As we said, we can only imagine Pistol Pete's scoring average would've been had there been a three pointer during his time. But on the other hand, we can compute Stephen Curry's college scoring average without the benefit of the three point shot. That would be a better comparison.

Not On The Same Level 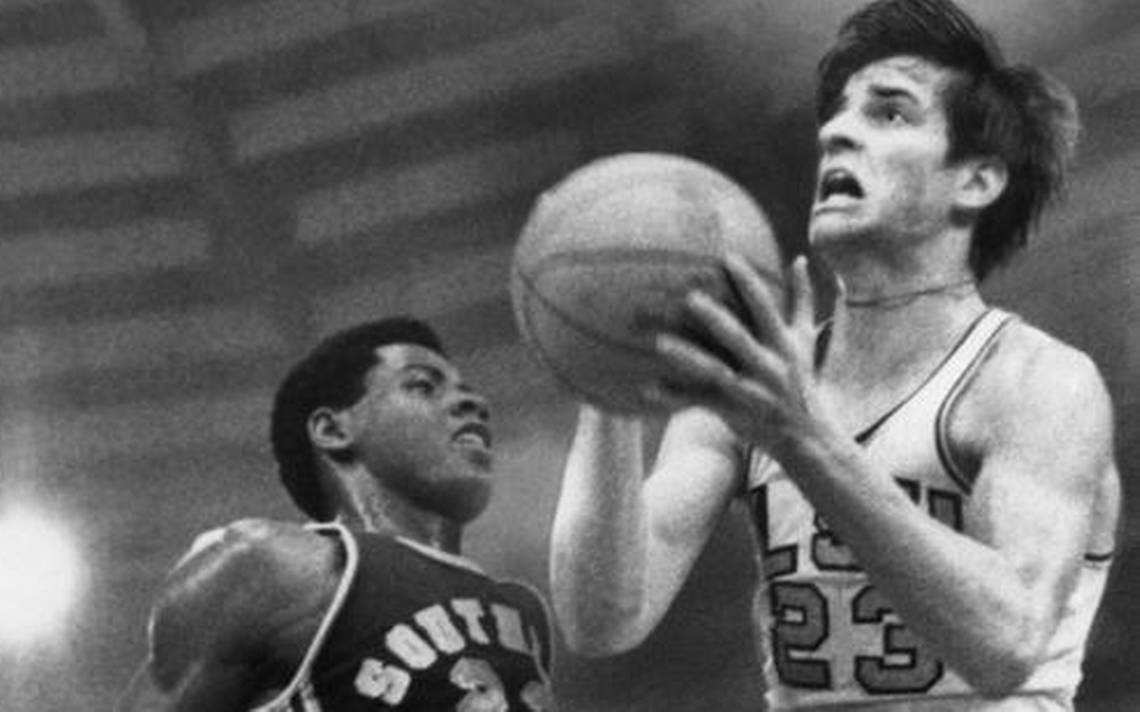 If you translate that to college career points totals, Pete Maravich still tops Stephen Curry, even if the latter played in more collegiate games than Pistol Pete. Steph scored 1,032 fewer points than Pistol Pete in 21 more games played. Curry never scored at least 1,000 points in a single NCAA season. Maravich topped the 1,000 point mark in each of his three years in college.

Maravich is the all-time scoring leader in college basketball history. In the Top 10, only he and Oscar Robertson played in less than four years and appeared in less than 100 games. Roberson's 33.8 collegiate scoring average was the closest to Maravich's numbers and it was even more than 10 points fewer.

Curry isn't even in the Top 25 of the NCAA's scoring list but that's because he played in just three seasons while most of the players on that list played out their eligibility. Among the top 25 collegiate scorers, only Maravich, Robertson, Elvin Hayes and Larry Bird played in three seasons. So for a Curry to be close to the company of these Hall of Famers speaks a huge deal about his scoring prowess. It's just not in Pistol Pete's level though.

Closer In The Pros 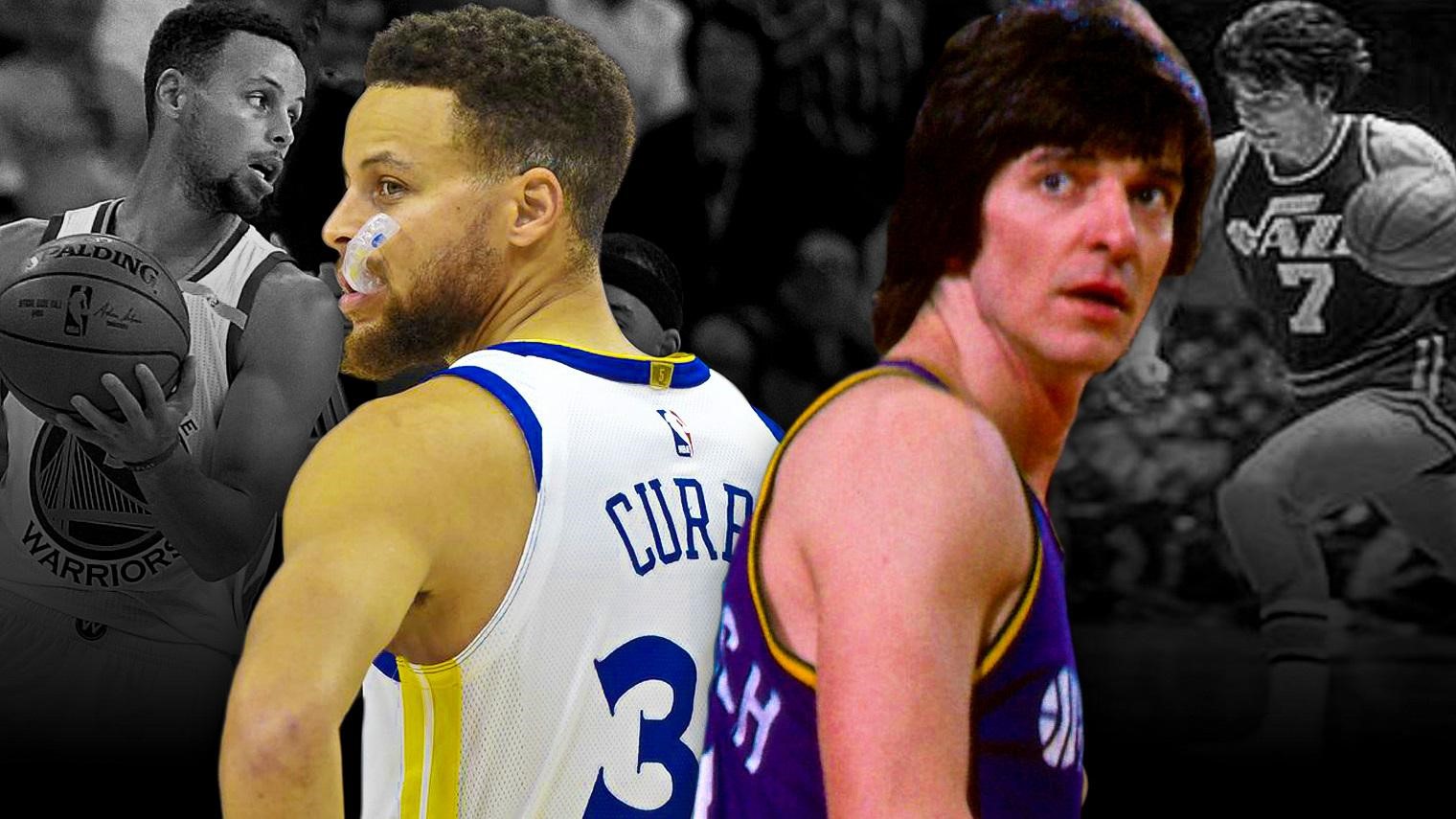 While Maravich vs Curry is a mismatch individually in college, the same cannot be said in the pro ranks. If we put them on equal footing using Per 36 minutes averages, Maravich is at 23.6 points per game while Curry is at 24.0 points per game. Again, Maravich supporters would point at Curry's career average of 3.5 three pointers per game as the reason, hence giving Pistol Pete a slight scoring average edge over Steph Curry.

Excluding Pistol's 1980 postseason appearance with the Celtics, his playoff scoring average was 25.47 points per game. Curry meanwhile is a career 26.2 points per game scorer, including 4.2 three pointers made per game. Again, even if we subtract the three point shooting difference, there isn't too much disparity between the two but still, Maravich would have the slightly better scoring numbers.

But while Pistol Pete may have better scoring numbers than Curry, Maravich never played alongside three other all-stars on his team's. Curry currently shares the floor not only with Splash Brother Klay Thompson and Draymond Green, but also with Kevin Durant who is one of the most gifted offensive players of any generation.

Playing with Durant has taken some of the scoring load off Curry. As a proof, Curry averaged a career high 30.1 points per game the season before KD arrived. Since Durant began playing for the Warriors, Steph's scoring as well as his shot attempts have naturally dropped. Even before Durant came, Curry had to share the ball with Thompson and Green, making it not possible for him to score at he pleased. 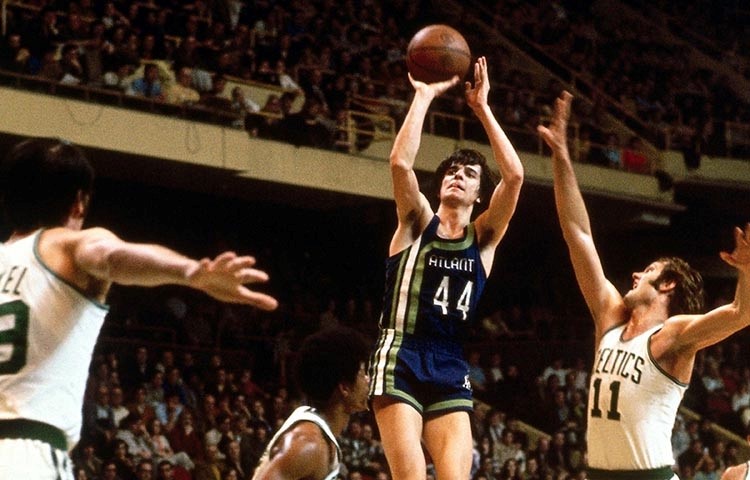 So who is the better scorer? In the college ranks, a comparison between the two is blasphemy. In the NBA, it’s pretty even except that if Pistol Pete had the three point line, he could have easily outscored Stephen Curry by a significant margin.

The NBA first introduced the three point line during Pistol Pete’s final ( and injury plagued ) NBA season where he played just 43 games, split between Utah and Boston. Maravich took a total of 15 three pointers during that season and he made 10 of them for a 67% three point shooting percentage. While 15 may not be a gauge of how he would’ve shot had he had the three point arc during his entire NBA career, it was an indication of how good an outside shooter Maravich was and how good a three point shooter he would have been.

Whether he would’ve been better than Curry from beyond the arc or not, we will never know and we can only imagine. But the point fere is, the three point shot would’ve given Pete Maravich an extra window to boost his scoring output, just as it has boosted Stephen Curry’s numbers. 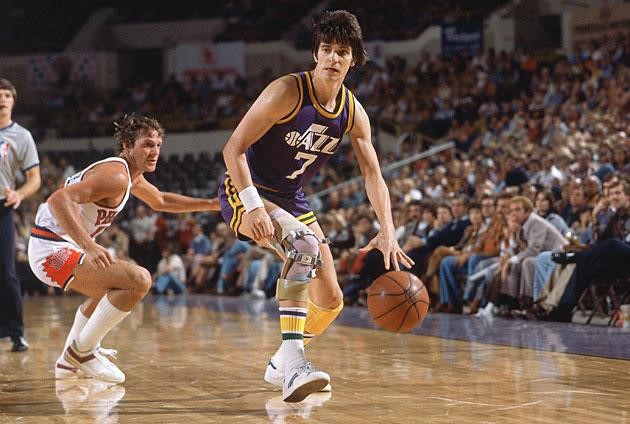 Of course, Maravich didn’t come without controversy. His father coached LSU during every season he played there, hence getting off shots was never a problem. More shots meant more point opportunities. Pistol Pete merely cashed in on them. But even with plenty of shots, if you can’t make baskets, you wouldn’t have averaged 40 points per year for three consecutive years.

Also, while Maravich may have been the more productive scorer than Stephen Curry, his teams were less successful than Curry’s. Pistol Pete's teams never reached the NCAA tournament, although they played in pre expansion tournament era. LSU won more than 15 games only once in his three collegiate seasons, winning 22 when he was a senior.

Curry meanwhile led Davidson two two NCAA tournament appearances in three years. These happened during his freshman and sophomore years where Davidson had a record of 29-5 and 29-7, respectively. Curry led the Wildcats to the Elite 8 in 2008, before losing to eventual champions Kansas Jayhawks. They went 27-8 during his junior year but failed to get a ticket to the Big Dance. 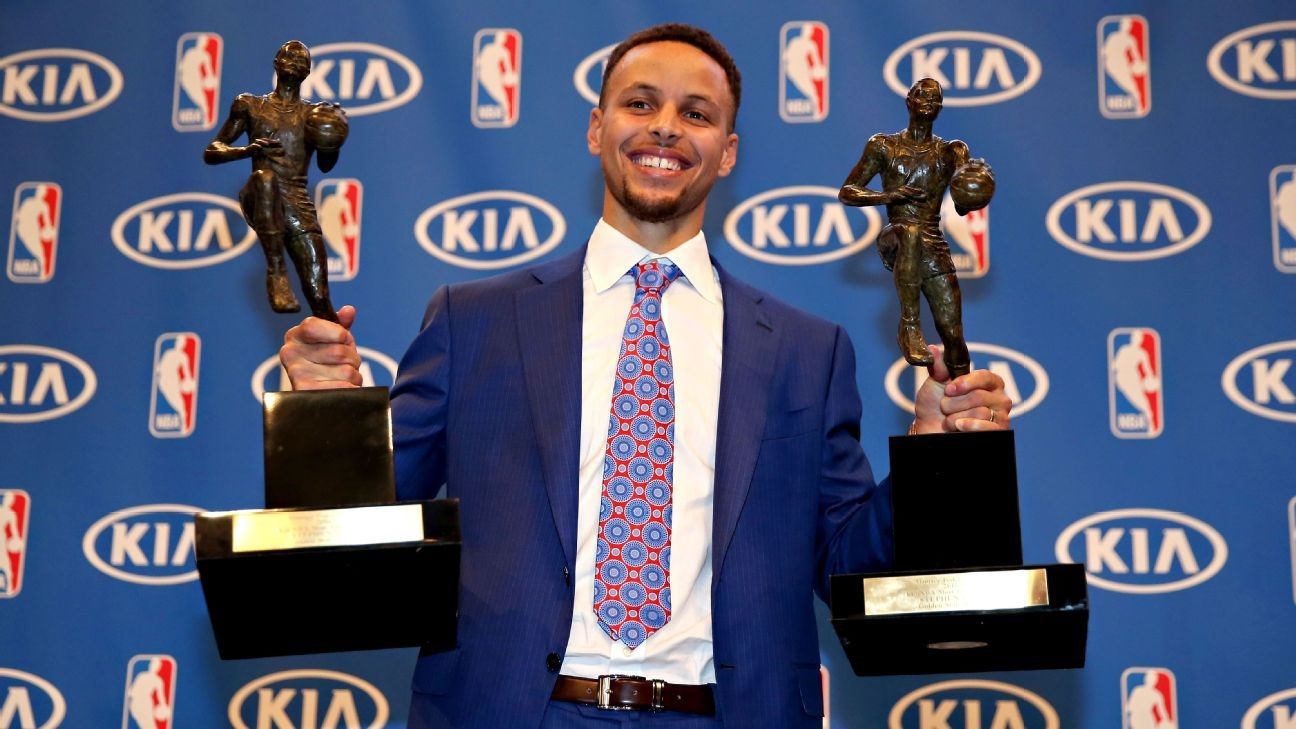 Not only does Curry top Maravich in collegiate achievements, he also tops Pistol Pete in NBA success. Curry is a two time MVP , two-time NBA champion and he's not yet done. The Golden State Warriors have made the playoffs in five of his eight seasons and have made the NBA Finals in the last three seasons. In 2016, they set the record for most wins in a single season with 72.

Meanwhile, Maravich's teams reached the playoffs only 4 times in 10 seasons with none of them reached the NBA Finals. The only time Maravich went to the Conference Finals was in 1980 when he played for the Boston Celtics. But that team was led by Tiny Archibald, Cedric Maxwell and Larry Bird.

But we’re not comparing achievements here because if so, then Curry would win it by a mile. We’re talking about the better scorer here and not only did Pete Maravich come up with the more creative shots, he was the more productive scorer than Stephen Curry. Just imagine Pete Maravich with a three point line.