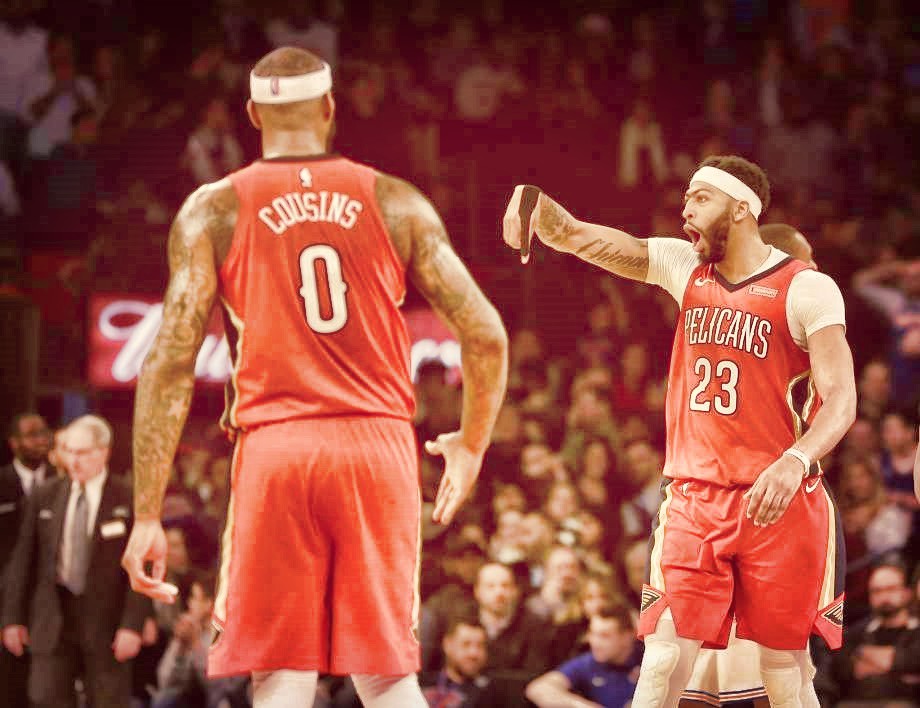 When big time players are on the biggest stage, they shine brightest.

That statement proved to be true after Anthony Davis’ monster night at the Madison Square Garden on Sunday. The Brow scored a season high 48 points and grabbed 17 rebounds to help the New Orleans Pelicans overcome a 14 point lead at the start of the fourth quarter and defeat the New York Knicks in overtime 123-118.

It was the second time in five days that the Knicks coughed up a double digit lead and lost in overtime. New York dropped a 122-119 double overtime thriller to the Chicago Bulls last January 10, 2018. It was also the second time this season that the Knicks have lost a game after leading by 14 points at the start of the fourth quarter. But enough of the Knicks’ woes, it’s not them that we want to talk about here. It’s Anthony Davis. 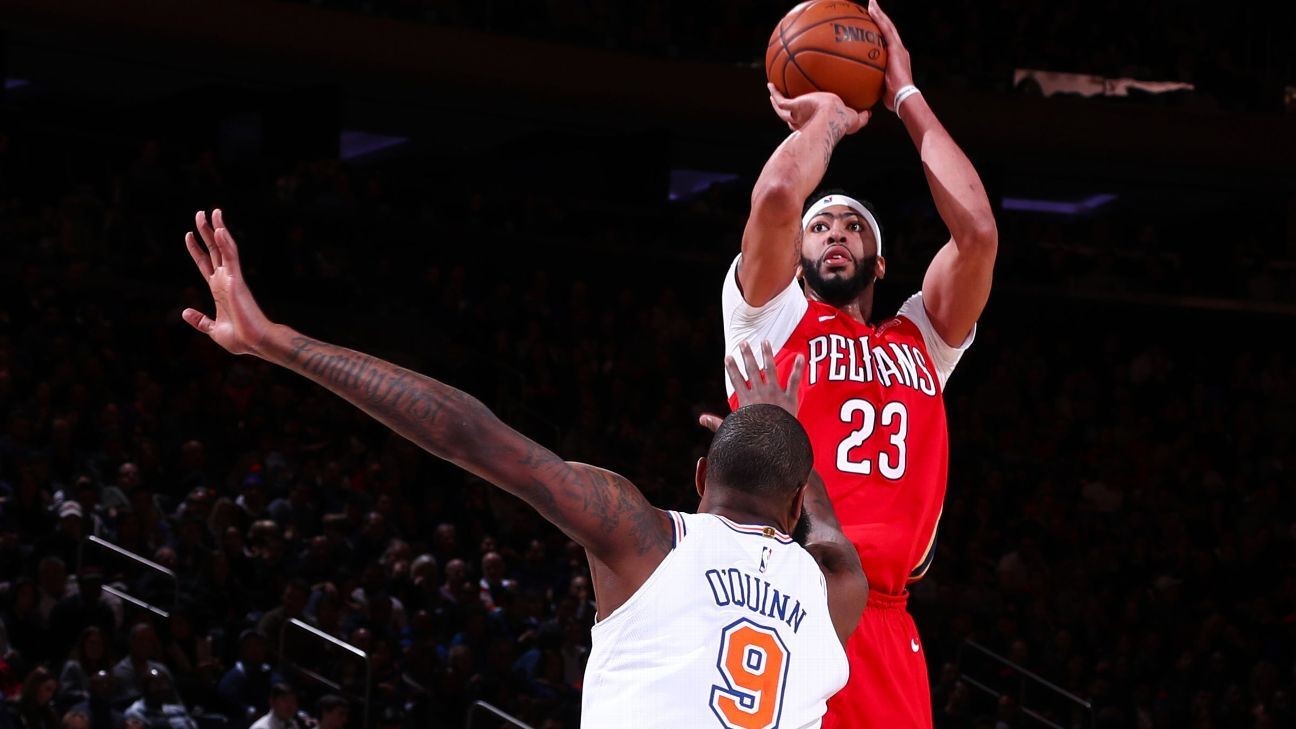 Davis isn’t new to those kind of stats. In fact, it is the fifth time in his career that he’s recorded at least 45 points and 15 rebounds, the most by any player other than Shaq ( who did it eight times ). It is also the third straight game at Madison Square Garden where Davis has scored at least 35 points and grabbed at least 10 rebounds.

If we take a look at Anthony Davis’ career at the Garden, the Brow is averaging 41.33 points, 15.33 rebounds, 1.66 steals and 3.33 blocks in his last three appearances at Madison Square Garden. The Pelicans have also beaten the Knicks in Davis’ most recent two outings there. But not only is Davis a big performer at the Big Apple, he is now also a record better while playing there. 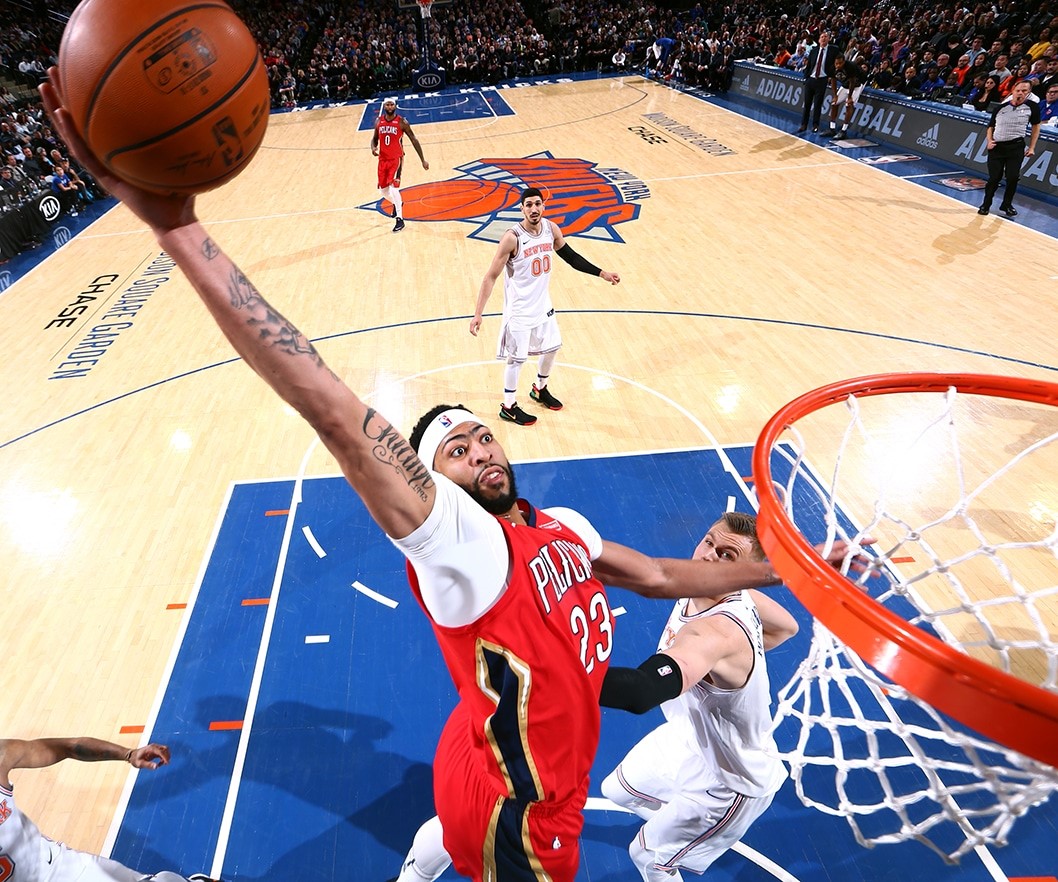 With his huge performance against the Knicks, David joins David Robinson, Dirk Nowitzki, Larry Nance and Hakeem Olajuwon as the only players in NBA history to record a statline of at least 45 points, 15 rebounds, 3 steals and 3 blocks. The Brow also joins Olajuwon as the only players to accomplish the feat more than once. Davis had 50 points, 15 rebounds, 5 assists, 5 steals and 4 blocks against the Denver Nuggets on October 26, 2016.

Davis also joined Michael Jordan as the only players to score at least 48 points, grab 7 rebounds and have 4 steals. MJ posted those numbers in 1990. If you factor in Davis’ 3 blocks, he is the only player in NBA history to finish a game with a statline 0f 48 points, 17 rebounds, 4 steals and 3 blocks. That’s spectacular, really. 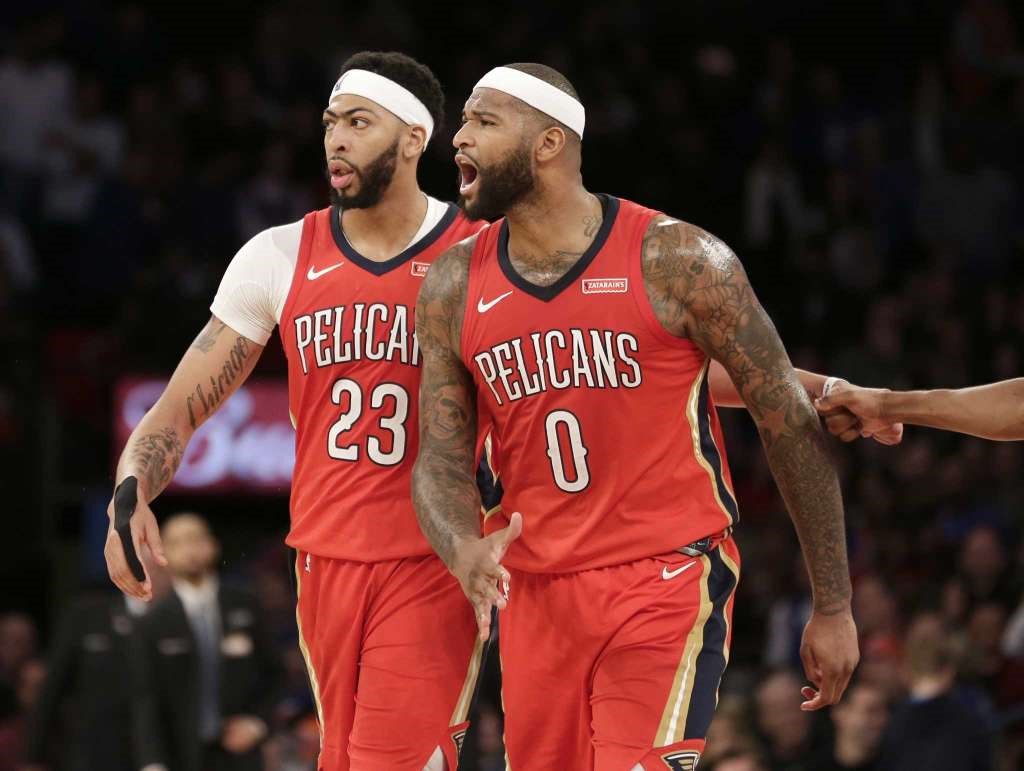 But Davis wasn’t the only one making history against the Knicks. Davis’ frontcourt mate DeMarcus Cousins also recorded a piece of history on Sunday. Boogie put up an equally impressive stat line of 15 points, 16 rebounds, 5 assists, 7 steals and 3 blocked shots. In doing so, he joined Michael Cage, Gerald Wallace and Hakeem Olajuwon as the only players in the history of the NBA to post a statline of at least 15-15-7-3. He also joins Olajuwon as the only players in league history to finish with that statline while also distributing 5 assists in a game.

Like Anthony Davis, Cousins also likes to play big in New York. In his last three appearances at the Garden ( two of which were played when Boogie was still with Sacramento), Cousins in averaging 25 points, 16.33 rebounds, 4.33 assists 3 steals and 2.66 blocks per game. He has also won four of his last five games in New York. 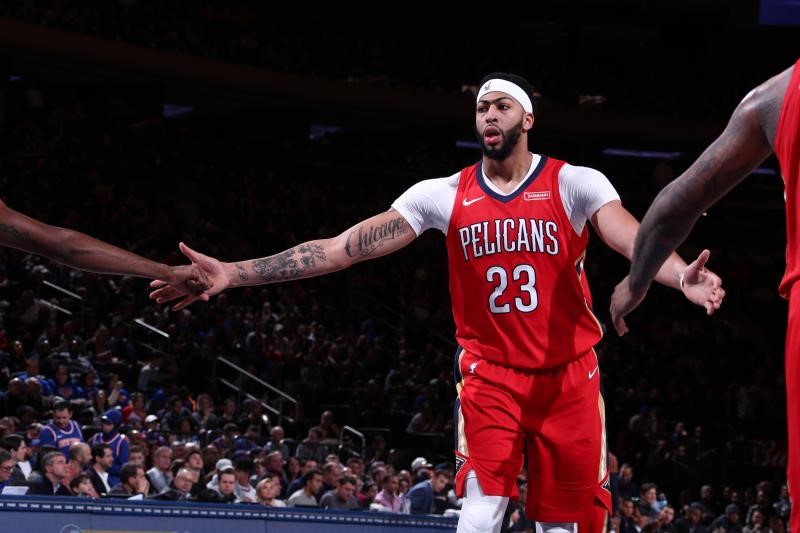 With the win over the Knicks, the Pelicans improved their season record to 22-20, which puts them just half a game behind the OKC Thunder for the 5th seed in the Western Conference. It’s been a roller coaster season for the Pelicans but they’ve won four of their six games in January 2018.

Davis meanwhile is having his best stretch of the season. He’s scored at least 30 points in three of five games played this year and is averaging 31.8 points, 12.0 rebounds, 1.6 steals and 1.8 blocks per game in 2018. The Pelicans hope Davis sustains this kind of performance as they make their push for the postseason. 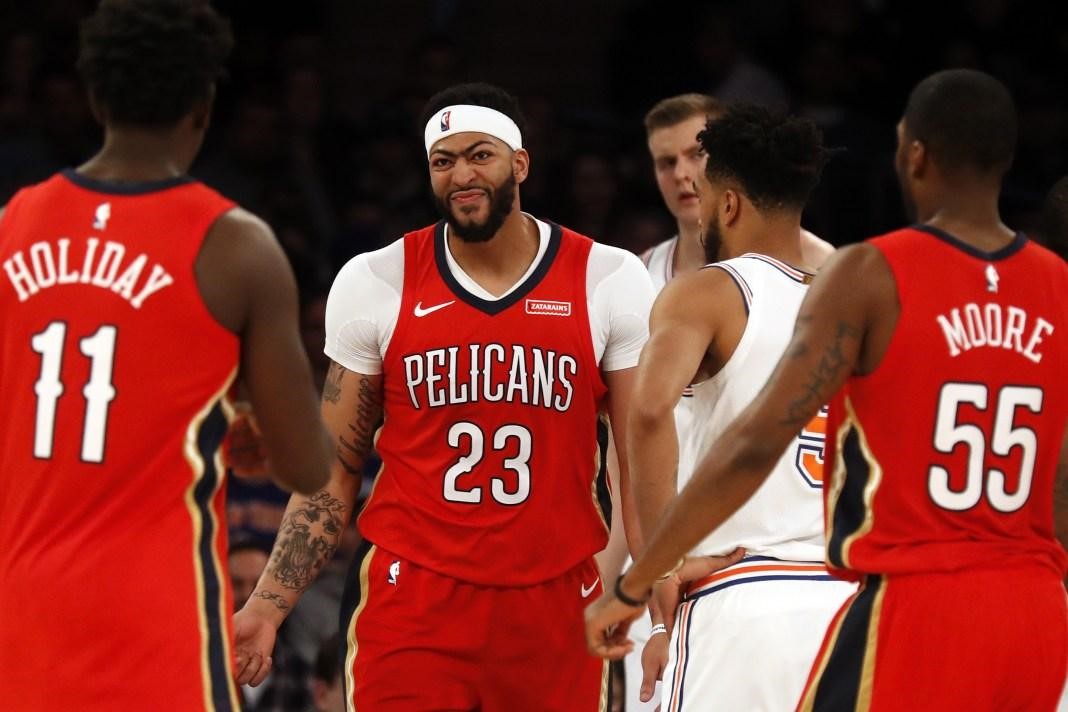 New Orleans has made the playoffs just once in the last six years and has not won a playoff game since 2011. Despite adding DeMarcus Cousins in February 2017, the Pelicans couldn’t make the playoffs and finished just 10th in the Western Conference with a 34-48 record. But with the Pelicans finally figuring out what to do with two of the best big men in the NBA playing on the same frontline, New Orleans is seeing some of its rewards.

While the Golden State Warriors are changing the landscape of professional basketball with their small ball approach and the Boston Celtics embracing positionless basketball, the Pelicans are doing the opposite by going big and trying to win using the traditional way of playing the game. 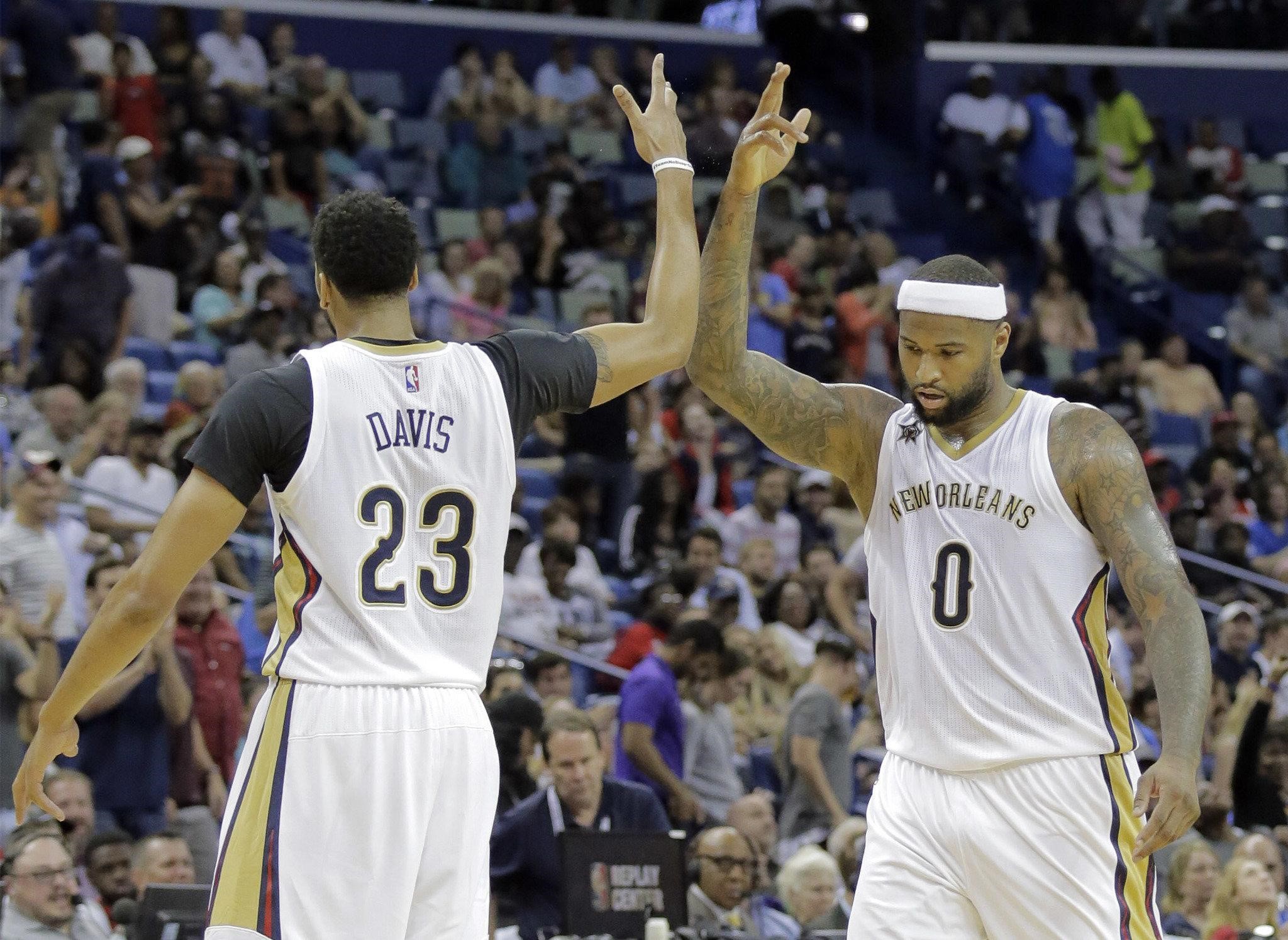 In the history of the NBA, we’ve seen the twin towers formula work for several teams. Most recently, the Houston Rockets had Ralph Sampson and Hakeem Olajuwon and they reached the 1986 NBA Finals with their twin towers. The Spurs’ twin towers of David Robinson and Tim Duncan earned them two NBA titles in 1999 and 2003. What will the Pelican’s fate be with their own version of the Twin Towers?

The rumors of DeMarcus Cousins and even Anthony Davis being traded before this year’s deadline have repeatedly hit the rumor mill even before this season began. But with the Pelicans starting to hit their stride and their two all-star big men currently playing at a high level, perhaps the Pelicans should think about keeping their twin towers and see how far they will take the team this season. 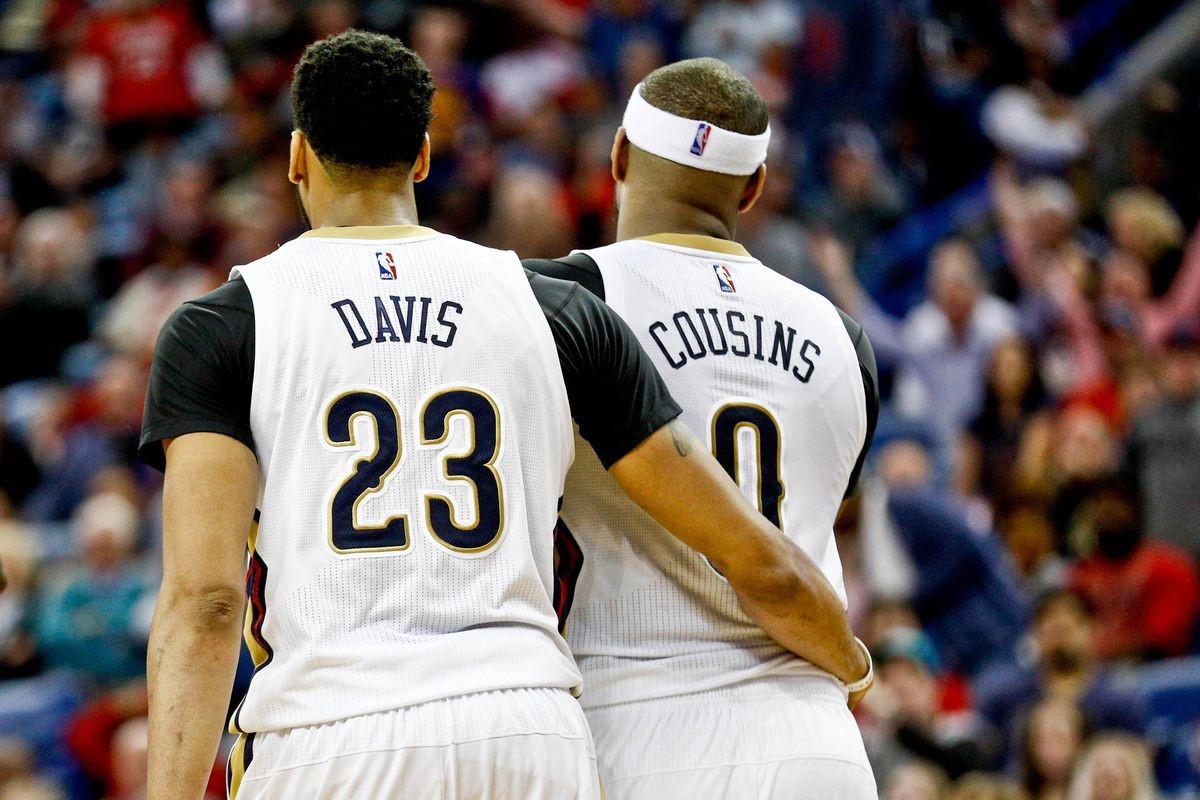 Sure, there is a risk of losing Boogie without any compensation because he will be an unrestricted free agent at the end of the season. But if the Pelicans finish the season strong and make a good run in the postseason, then maybe winning changes everything and Cousins might just stay ( fingers crossed ).

As for Anthony Davis, his current contract has him locked up until 2021. There are current rumors linking him to contenders like the Golden State Warriors and Boston Celtics but after a strong start to 2018, perhaps the Pelicans should keep their young superstar and surround him with the talent ( Boogie included ) needed to take the franchise to the next level. After all, there’s nothing really wrong with the Pelicans. They just need a few more pieces and plenty of consistency to start winning.