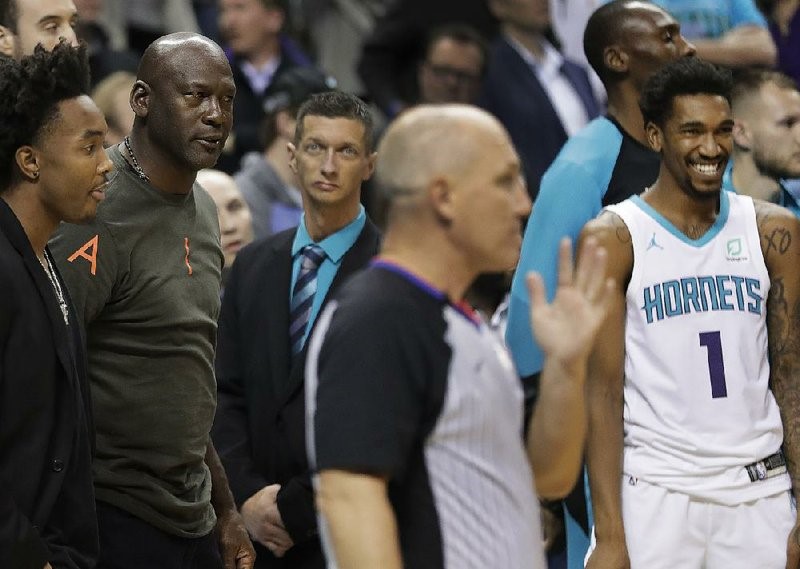 People are making a big fuss about Michael Jordan’s “light tap” on the back of the head of Charlotte Hornets player Malik Monk in the closing moments of the Hornets’ game against the Detroit Pistons last Wednesday.

That incident happened after the Hornets were assessed a technical foul after Monk and teammate Bismack Biyombo entered the court to celebrate Jeremy Lamb’s game winning basket. However, when Lamb called game, there were still 0.3 ticks left on the clock meaning the game was not yet over.

#Hornets owner Michael Jordan wasn't too happy with Malik Monk after he ran onto the court before the game was over and got called for a technical 😭😂@WCCBCharlotte pic.twitter.com/575UlSeZNz

After getting criticized for his actions, Jordan defended himself by saying that it was no more than a big brother tap. Said MJ last Thursday:

“It was like a big brother and little brother tap,” he told the Associated Press. “No negative intent. Only love!”.

Monk himself agreed with MJ and said it was nothing. Said Monk:

“… It's Mike, and whatever he does is going to make [news] because nowadays it's all social media and everybody has their phone out there and I wasn't surprised.”

But Bismack Biyombo, the player who ran on court together with Monk for the premature celebration, acknowledged that they made a bad mistake:

“I did not realize we still had time on the clock,” he said. “I was watching the replay and you could see I was all the way out there [and] Malik was on the court...When Jeremy Lamb pointed at the clock, we were like, 'shoot, we still have a lot of game to play.’”

Biyombo was correct. Three tenths of a second is an eternity of basketball left. And Michael Jordan knows that too well not to let his players know.

When Lamb made the “game winning” jumper, there were still 0.3 of a second left on the clock and the Hornets were up by just two points at 108-106. Now, under NBA rules, a team can still take a legal shot with that amount of time left. Meaning, the Pistons still had a chance to make a three pointer and steal the game with 0.3 of a second left. When the Hornets were assessed a technical foul for having “too many players” inside the playing court, the Pistons’ Langston Galloway made the free throw to cut the lead to 107-108, giving Detroit with a better chance at winning the game.

When Galloway made the technical free throw, the Pistons were only down one, which meant they only needed a two point basket to steal the game from the Hornets. Under NBA rules, only 0.1 of a second is needed to make a shot, provided that the shot is an alley oop or tip in. With high flying big men like Blake Griffin and Andre Drummond, surely the Pistons had a real chance to win that game. Unfortunately, the Pistons could not get a shot off and the Hornets were lucky to escape with a win. But the technical foul could have really been disastrous and Michael Jordan knows better. That’s because MJ was personally involved in the game that became the basis for the NBA rule on expiration of time.

It was January 15, 1990 and the New York Knicks hosted the Chicago Bulls at the Madison Square Garden. The Bulls had eliminated the Knicks in the playoffs the season before and that game was their chance at revenge. Knicks franchise player Patrick Ewing was having his best season ever and the Knicks were then coached by Stu Jackson who had taken over from Rick Pitino who left to revive the basketball program of the University of Kentucky.

It was a close game to the end and the score was tied at 106 apiece with one tenths of a second left in the game. Incidentally, that was the first season when the NBA used fractions of a second in their game clock so at that time, there was no rule yet on how much time was needed to get a legal shot off. And then it happened.

Mark Jackson inbounded the ball and was looking for Ewing going to the basket or going up for a lob pass. But Ewing could not break free. Instead, Jackson spotted guard Trent Tucker who was on the move. Jackson threw the ball to Tucker who caught the ball, spun with it in one movement and then threw a desperation heave near the sideline, just behind the three point line. SWISH! The timekeeper’s buzzer sounder after Tucker had released the ball, giving the Knicks the dramatic win.

Bulls’ head coach Phil Jackson vehemently protested the basket, saying that it was impossible for Tucker to catch a pass, make a move and then get off a shot with 0.1 left on the clock. Tucker swished the basket right in front of Scottie Pippen. But since no rule was established at that time, the basket counted and the Knicks won. 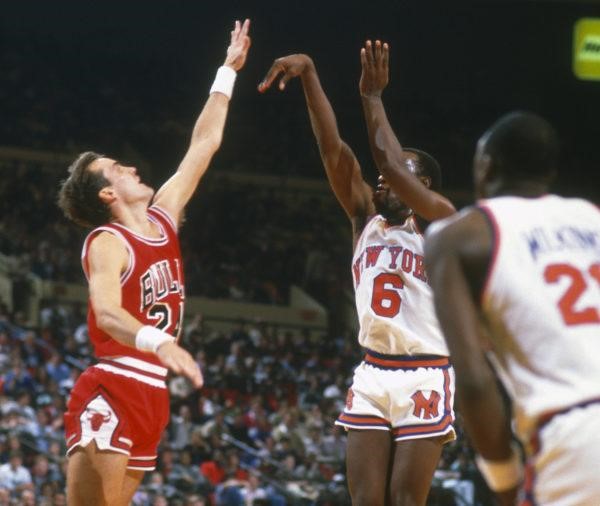 After the game the NBA immediately established a rule that stated that 0.3 of a second is needed to make a legal shot. Here is the rule:

The game clock and shot clock must show :00.3 or more in order for a player to secure possession of the ball on a rebound or throw-in to attempt a field goal. Instant replay shall be utilized if the basket is successful on this type of play and the game clock runs to 0:00 or the shot clock expires on a made basket and the officials are not reasonably certain that the ball was released prior to the expiration of the shot clock. The only type of field goal which may be scored if the game clock and shot clock are at :00.2 or :00.1 is a “tip-in” or “high lob.”

A “tip-in” is defined as any action in which the ball is deflected, not controlled, by a player and then enters the basket ring. This type of action shall be deemed legal if :00.1 or more remains in a period.

A “high lob” is defined as a pass which is tipped by an offensive player while in mid- air, and is followed instantaneously by a field goal attempt. If the reception of the pass and the subsequent “slam dunk” is immediately adjacent to the basket ring, this type of action shall be deemed legal if :00.1 or more remains in a period. However, if the “high lob” attempt is a distance from the basket ring whereby the ball must be controlled in mid-air, either one-handed or two-handed, a minimum of :00.3 is necessary for a field goal to score if successful. Instant replay would NOT be used if the play starts with :00.2 or :00.1 on the game clock or shot clock.

Now where was Michael Jordan in all these? Michael was right under the basket when Trent Tucker made that shot. He heard that ball swish through the nets. He heard the Madison Square Garden crowd erupt in jubilation after that near improbable basket. On Wednesday night, Jordan could have been in a similar spot but on a different scenario.

MJ is the Hornets’ team owner. He loves watching him team play and gets into the game sometimes. On Wednesday, Jordan knew too well what Malik Monk’s mental mistake could have cost the Hornets. Monk was born on February 4, 1998 or eight years after Trent Tucker made that miracle shot. I’m not even sure if he knows Trent Tucker, much more the Trent Tucker rule. But for guys like you and me who were already fans of the league during the time of Magic and Bird, we know Trent Tucker and we know how he changed the rules of the game. Michael Jordan knew that too well too. Why not? He was right below the basket when Tucker’s three ball swished the net. So why blame him for slapping Malik Monk on the back of the head?