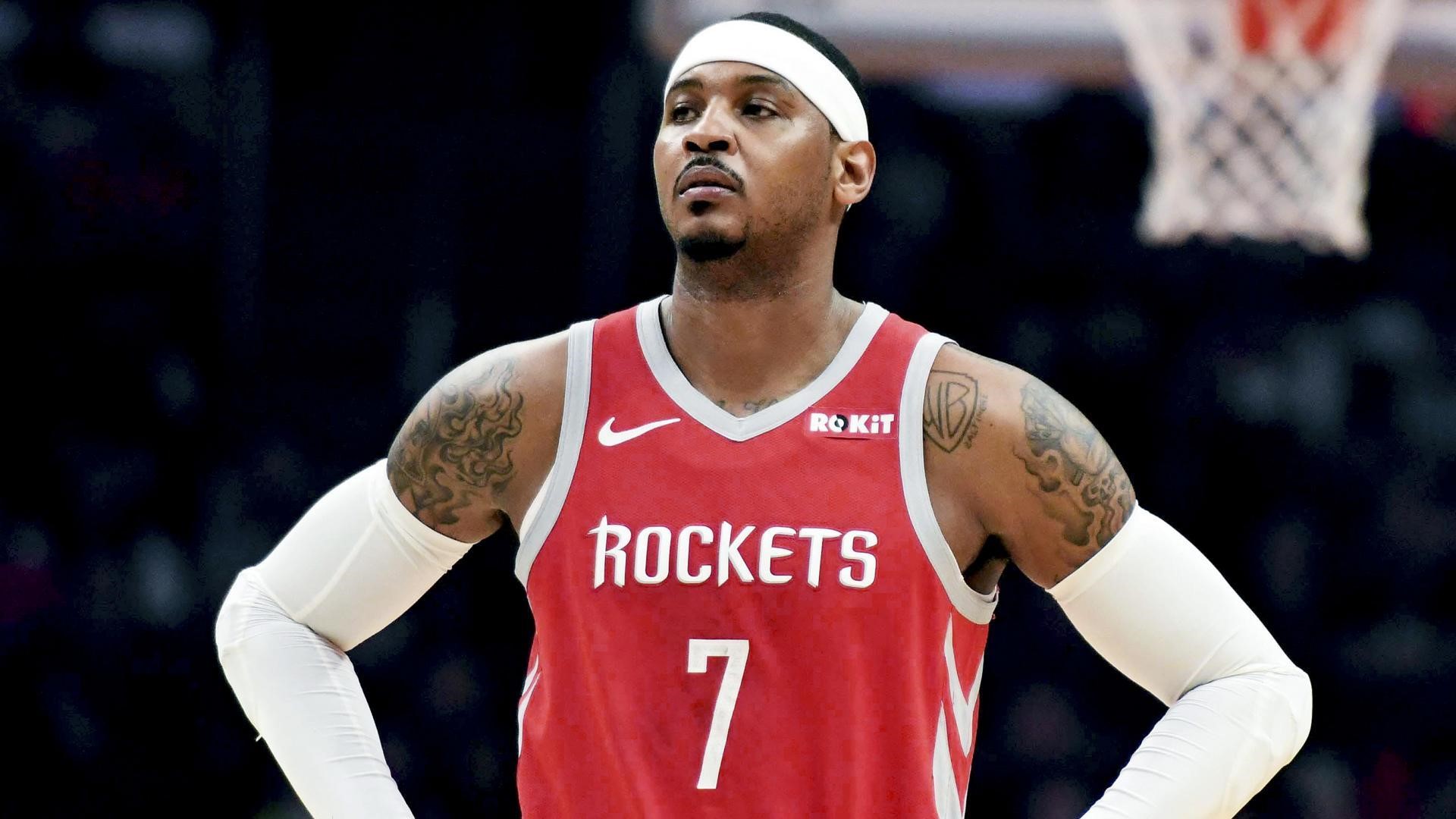 What’s The Latest On Carmelo Anthony?

All-Star forward Carmelo Anthony was on the move again this summer after being traded to the Oklahoma City Thunder last season. This time around, the Thunder traded Anthony to the Atlanta Hawks who in turn immediately waived the former New York Knicks superstar. Once he cleared the waivers, Anthony signed a veteran’s minimum deal with the Houston Rockets. In Houston, Anthony joined good pal Chris Paul and James Harden to form what was supposed to be a deadly trio. Instead, the Rockets struggled for form to start the 2018-19 NBA season and after just 10 games, Houston decided to end the Carmelo Anthony experiment.

Last November 15, after much speculation, the Rockets finally issued a statement announcing that they have decided to part ways with Melo. Said Houston GM Daryl Morey:

“After much internal discussion, the Rockets will be parting ways with Carmelo Anthony and we are working toward a resolution,” said Morey. “Carmelo had a tremendous approach during his time with the Rockets and accepted every role head coach Mike D’Antoni gave him. The fit we envisioned when Carmelo chose to sign with the Rockets has not materialized, therefore we thought it was best to move on as any other outcome would have been unfair to him.”

One week later, Anthony still remains a Rocket. But if Houston said it was moving on without him, why is he still with the team? According to the New York Times’ Mark Stein, the answer is simple: money.

If the Rockets would just waive Melo outright without guarantee that another NBA team will pick him up, Houston would end up paying a luxury tax of $2.6M at the end of the year. However, if the Rockets are assured that some NBA team is going to sign Anthony or if they can trade him once his trade restrictions are lifted on December 15, 2018, then they will avoid being penalized with the luxury tax.

Although Anthony is having career low numbers right now, his stats are still decent and his experience could still be useful in some other destination. However, poor fits in Oklahoma City and Houston are probably scaring off potential suitors as right now, no team has sent feelers about acquiring the future Hall of Famer.

Anthony’s Rockets’ contract is $2.4M but the Rockets only owe him for $1.5M with the NBA making up for the difference. That’s because under the league’s rules, the veterans minimum contract is scaled such that players with longer tenure in the league are entitled to a higher minimum salary. However, all veterans regardless of the number of playing years, will count on a team’s salary cap in the same amount as a two year player earns his minimum pay which is $1.5M for this season.

But although the Rockets are only obliged to pay Melo $1.5M, the team’s total salaries have exceed the luxury tax limit by $9M. That means that the Rockets will have to pay the luxury tax of $1.75 per dollar on Melo’s cap hit which in this case is equivalent to $2.6M. By any means, that’s a large sum of money to be given away to the league at the end of the year.

Likewise, the Rockets are waiting for the December 15 cutoff so they can potentially trade Anthony to another team. As we said earlier, although Anthony is no longer the scoring machine he used to be, his numbers are still decent and would be of help to a team in need of offense. If the Rockets can’t come up with a trade that has Anthony as principal, they can also use him and his salary to complete another trade deal so this is another possible reason why the Rockets haven’t waived him yet.

Another reason why the Rockets are holding on to Anthony right now is the fact that they only have a 14-man roster including him. NBA rules state that every team must carry a 14-man roster at all times so if the Rockets waive Anthony, they would have to sign another played to a minimum deal as his bodily replacement. That would mean additional salary to their over the luxury tax figure which means more payments to the league at the year’s end.

Currently, the Rockets have inserted Rookie Gary Clark in the roster in favor of Carmelo Anthony. That’s because Clark is currently signed to a two-way contract, which means that his salary still doesn’t count against the Houston payroll. But once his 45 day contract expires sometime in mid-December, the Rockets will incur additional cap hit if Clark is put in the regular lineup and Anthony is waived without benefit.

The Rockets have every reason to put Clark in their 14 man unit. The 6-8 forward has been averaging 4.0 points, 3.1 rebounds and 0.9 blocks per game in 17 minutes of playing time per game. With Clark on the court, the Rockets have a +1.5 net difference in offensive rating. Not much but still a positive and a very impressive improvement from Anthony who was a -17.6 in net offensive rating.

Is It The End? 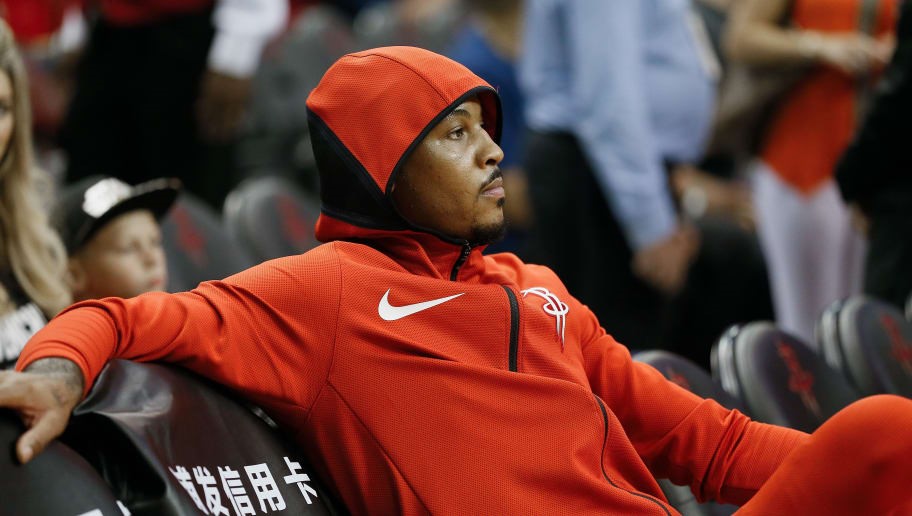 As for Anthony, his future in the NBA hangs in the balance. Last April, Anthony talked about having “so much left in the tank” and he entered this season hopeful that he could contribute to the Rockets. If Anthony sacrificed a lot in trying to fit with the Thunder, he’s given up more this season, including the longest active streak of not coming off the bench which was at 1,054 games ( including 72 playoff games ). When he played with the Thunder, he once declared that he would not accept a bench role. However, that was the role he accepted in Houston. Still things didn’t work out for him, unfortunately. It remains to be seen what happens of Carmelo Anthony’s NBA career but if he has indeed played his last NBA game, what a basketball career it has been.

Anthony won an NCAA title as a freshman in Syracuse and was named NCAA Tournament Player of the Year in 2003. He was drafted third overall in the fabled Class of 2003 and quickly earned a reputation as one of the premier scorers in the league. He is a 10-time NBA All-Star and a six-time All-NBA team member. He has donned the National colors a record four times, winning gold thrice and the bronze medal once. Anthony is also the all-time leading scorer for the U.S. men’s basketball team and it’s all-time leader in rebounds and games played.