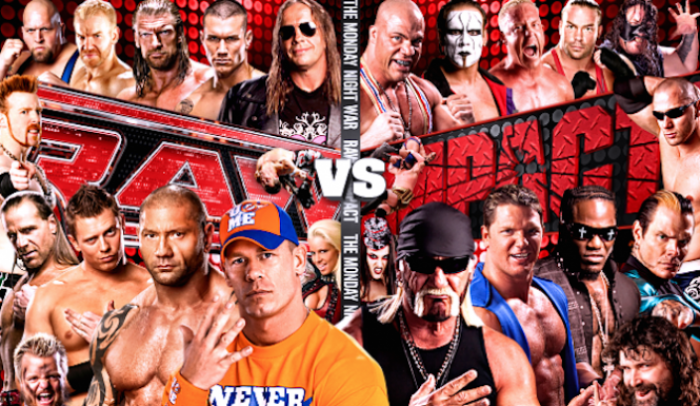 WWE vs TNA is pro wrestling’s version of a civil war. But while these two promotions have been competing against each other for decades, you also cannot deny the fact that many of your favorite professional wrestling superstars have strutted their wares from one promotion to the other ( and vice versa for a few). Some started at TNA, then later moved on to the major leagues at the WWE. Others were at the WWE first before spending the twilight of their careers at TNA. Still, there were a handful who enjoyed plenty of success at both companies. Others won championships at both organizations.

Let’s have a look at some of the most popular professional wrestlers who won titles at both TNA and the WWE:

At first glance, you would think he was Jean Claude Van Damme. Perhaps that’s where the name came from. And yes, RVD is a part time actor, having appeared in the TV series X-Files and movies like Wrong Side of Town. Film wasn’t his only success though.

RVD gained mainstream popularity when he became the ECW World Television Champion in 1998 and held that title for 700 days. When he moved to the WWE in the 2000’s he captured virtually almost every title available in the promotion.

Van Dam won the WWE Tag Team title twice, WWE Intercontinental belt six times. RVD was also the ;last WWE Hardcore and WWE European champion, unifying both belts with the Intercontinental title. In 2002, he was named as the #1 Wrestler in The World by Pro Wrestling illustrated and the most popular wrestler by the same publication in 2001 and 2002.

Van Dam defeated John Cena at ECW One Night Stand on June 11, 2006 to win his first WWE title. On the following ECW show, Paul Heyman awarded him the ECW championship, making him the only man to win both titles and hold them at the same time.

In 2010, Van Dam won the world title at TNA, defeating A.J. Styles during his first month in the promotion. At TNA’s Bound for Glory 2012, RVD defeated Zema Ion to become the X Division champion.

Styles is arguably the best talent to ever set foot on a TNA ring, the reason he was dubbed as Mr. TNA. Styles was the staple for TNA during his tenure from 2002-2013. He held the NWA Heavyweight title thrice, the TNA Heavyweight title twice and was the first ever X Division Champion ( he won the belt a total of six times ). He was also the first pro wrestler to achieve the TNA Triple Crown ( he did it five times ) and he also won the TNA Grand Slam twice.

Nearing 40, an aging Styles left TNA and signed with the WWE in January 2016. Not surprisingly, he skipped the developmental NXT and made his WWE debut at that month’s Royal Rumble pay per view event. He then went on to face Chris Jericho at Wrestlemania 32 that April and headlined several PPV events leading to his victory over Dean Ambrose in Backlash ( 2016 ) where he captured the WWE World Championship. Styles held the title until Royal Rumble 2017 where he lost to Randy Orton.

It will always be a mystery why Vince McMahon never offered Styles a big money contract during his prime because his potentials were limitless. But hey, winning the WWE World title was a big deal. And beating John Cena on a number of occasions in such a short period of time is surreal.

This man needs no introduction.

Considered as one of the most successful professional wrestlers in history, Mick Foley achieved tremendous success wherever he wrestled. He is known for his different characters such as Cactus Jack, Dude Love and Mankind.

As Mankind, he won the WWE’s first ever Hardcore title and won the Tag Team title on several occasions, with Chainsaw Charlie at Wrestlemania XIV and with Kane on two separate instances. His success would balloon after defeating the Rock to win the first of three WWE World Titles in January 1999.
In 2008, Foley would take his talents to TNA where he won the TNA World Heavyweight title at Lockdown 2009 against the iconic Sting. Later that year, he defeated Kevin Nash for the TNA Legends Championship.

If you know the catch phrases ‘Don’t hate the playa, hate the game’ or ‘Can you dig it sucka?’ then you should know Booker T.

Many wrestling insiders agree that Booker T. was the biggest acquisition the WWE got when it purchased WCW.

Booker T was the winningest wrestler in WCW history, winning a total of 21 titles there. He was a six time WCW Television champion, 11 time tag team champion and a 4 time World Champion ( the last one before WCW merged with the WWE ).

At the WWE, Booker T also became the 2006 King of The Ring winner, 16th Triple Crown champion and 8th Grand Slam champion. By 2007, Booker T. and wife Sharmell debuted for TNA. He never won the TNA World Heavyweight title there but his team-up with Scott Steiner at Victory Road gave him his 15th world tag team title reign and his first and only title at TNA, making him eligible for this list.

Booker T was inducted to the WWE Hall of Fame in 2013 by his brother Stevie Ray. Fellow WWE great, Kurt Angle once called Booker T “one of the top 5 best all-time”.

Steiner was born as Scott Carl Rechsteiner in Michigan where he built a standout amateur wrestling career at the University of Michigan. Steiner was a Division I All-American in 1986 where he placed sixth in the nation during his senior year.

Unlike CM Punk and AJ Styles who won titles in TNA first before achieving WWE success, Steiner was one of the many who made their stride in the WWE first before moving on to TNA during the latter stages of their careers.

The Steiners made their WWF debut in 1992 and appeared in the first ever Raw episode on January 11, 1993. Their feud with Money Inc.’s Million Dollar Man Ted Dibiase and Irwin R. Shyster led to the WWF Tag Team Title which went back and forth with both pairs. Scott Steiner was the first entrant in the 1994 Royal Rumble where he lasted for nine minutes before being eliminated by Diesel. Following that debacle, the Steiners left the WWE in mid 1994 and took their act to different promotions including the WCW ( 2nd stint ) and ECW.

After an 8-year absence, Scott Steiner made his WWE return in 2002. His run-ins with Triple H led to two world title shots. He won the first but by disqualification after HHH attacked him with a sledgehammer. He then went on to compete as Test’s tag team partner before being released by the WWE in 2004 after suffering injury. Incidentally, the man who would eliminate him in the 2004 Royal Rumble would become his tag team partner in his next wrestling life.