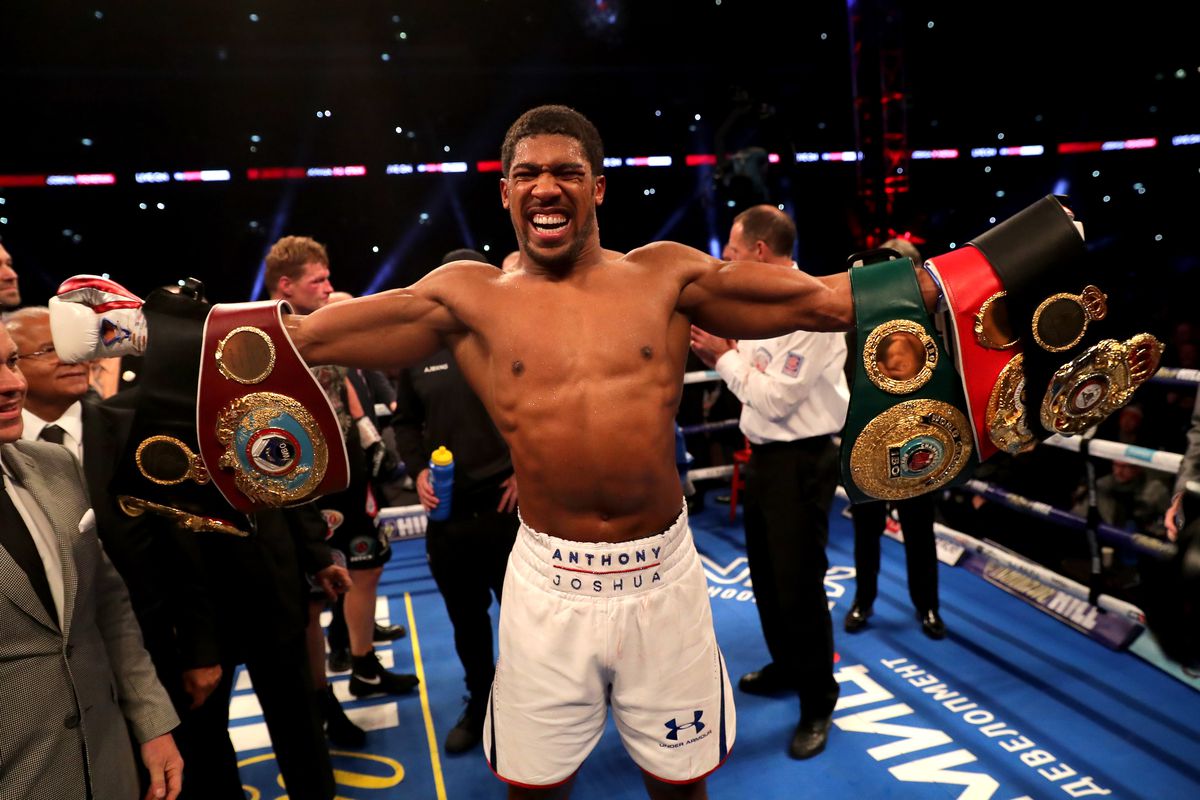 Anthony Joshua Stops Alexander Povetkin But What Next?

Anthony Joshua retained his WBA, IBF and WBO heavyweight titles with a 7th round TKO win over Alexander Povetkin in front of around 80,000 fans at Britain’s famed Wembley Stadium on Saturday night.

After being taken the distance by Joseph Parker in his last fight, Joshua returned to his knockout ways by flooring Povetkin with a left hook-right hand combination in round seven. The Russian got back to his feet, but barely and Joshua finished him off with a barrage of punches that called for the halt of the bout. After the fight, the pride of England said:

"I've got my knockout streak back and I found my right hand again," Joshua said. "Alexander Povetkin is a very tough challenge. He provided that, he was good with left hook. I realized he was strong to the head but weak to the body so I was switching it up. Every jab takes a breath out of you and I slowed him down."

Joshua bagged his 22nd win in as many fights and he also earned his 21st victory via stoppage. Joshua was 20-0 with 20 knockouts when he was taken the full route by then WBO heavyweight champion Joseph Parker when they fought last March 31st. Joshua has now defended his IBF title six times, the WBA belt thrice and the WBO belt for the first time.

"I'm not too fussed who wins between them, good luck to both," Joshua said. "The champion needs to get themselves over here to the UK and we'll have a good dust-up. My No. 1 would be Wilder."

Joshua had a chance to fight Wilder but negotiations between the two failed a couple of months ago. Joshua quickly booked a fight with the over the hill Povetkin while Wilder sought out a fight with lineal champion Tyson Fury. Between their choices, it’s pretty clear who wants to fight the best and who wants to earn the most.
But with the tables turned against them, Joshua and his delusional manager Eddie Hearn may now feel the pressure to fight Wilder or the winner between the American and Fury because their legitimacy has been questioned. Joshua already has a date and venue for his next fight: April 13, 2019 at Wembley Stadium. They don’t have an opponent yet although Joshua and Hearn claim they want Wilder next. That’s funny.

Will Wilder Be Next?

A couple of days ago, Joshua’s promoter Eddie Hearn told reporters that if a Wilder vs Fury bout won’t be booked soon, they could end up fighting Joshua’s WBO mandatory challenger. Said Hearn, via ESPN:

"We need to know if they [Wilder's camp] want the fight in April," Hearn told ESPN at Joshua's open workout at York Hall on Wednesday. "If Anthony beats Povetkin, we've probably got two, three weeks to make the Wilder fight -- otherwise we'll have to fight a WBO mandatory. It's frustrating, especially frustrating when people think that Anthony is stalling the fight or we're stalling the fight. We're ready to go. We've already sent a signed contract on the terms they agreed. Now they want to renegotiate the terms. No problem, just tell us the terms you want and we'll get it done for April. It's a lot of talk and not a lot of action from their side."

I’m not sure what Eddie Hearn is talking about. The bout was there to make a couple of months ago. Let’s not go back to the details but it’s pretty obvious who didn’t want to fight. Don’t get me wrong. I think Joshua is the much better boxer than Deontay Wilder, by a mile. But Wilder presents clear and present danger with his punching power and Joshua is obviously afraid to test Wilder’s punching power.

Going back, the fight was there to make but wasn’t it Hearn who put some crazy stipulations on the negotiations and tried to treat Wilder like trash? Hearn didn’t want Joshua to fight Wilder. I’m not sure if Joshua didn’t too. But now he’s demanding to know if Wilder wants to fight in April. And he’s saying they have two or three weeks to make the fight.

Obviously, Hearn is threatening the other side that they may take another fight. Well that’s another sign that he doesn’t want the fight. If he truly wants it, why not wait? Hearn wants to rush things according to his plan. Who does this prick think he is, God?

To See Is To Believe

The Wilder vs Fury bout has been announced for December 1 so there’s your answer Mr. Hearn. And while you can say all you want that your baby Joshua makes more money than both, who cares? Hearn looks at boxing as money. The fans want the best fighting the best. Not champions fighting over the hill drug cheats.

Look Wilder is guilty of fighting tomato cans early in his career. But look at his recent resume: Luis Ortiz last March and Tyson Fury in December. Okay, so the Brits are saying Fury isn’t ready and he isn’t a true test for Wilder. Come on mates, when Fury dismantled Wladimir Klitschko, they basked in his glory. Now that he’s fighting Wilder, Fury is suddenly a bum?

Joshua says he wants Deontay Wilder in April. Cool, but Wilder might not make it to April. The man whose team they call the “Bum Squad” is risking everything to fight the real heavyweight champion in Tyson Fury. Look, you can say what you want about Tyson Fury, but the guy is undefeated, the first man to beat Klitschko in over a decade and is the reigning lineal champion. Joshua? He has the belts but not the respect of everybody.

It would have been lovely to end the year having seen who wins between Anthony Joshua and Deontay Wilder. It was sorry to see that fight fall off the shelf, regardless of who was at fault. But if Wilder wins in December, let’s hope the fight finally gets booked. Hearn is talking a lot of crap right now because his fighter is coming off a win. But let’s see what he does after December 1. To see is to believe with these morons.