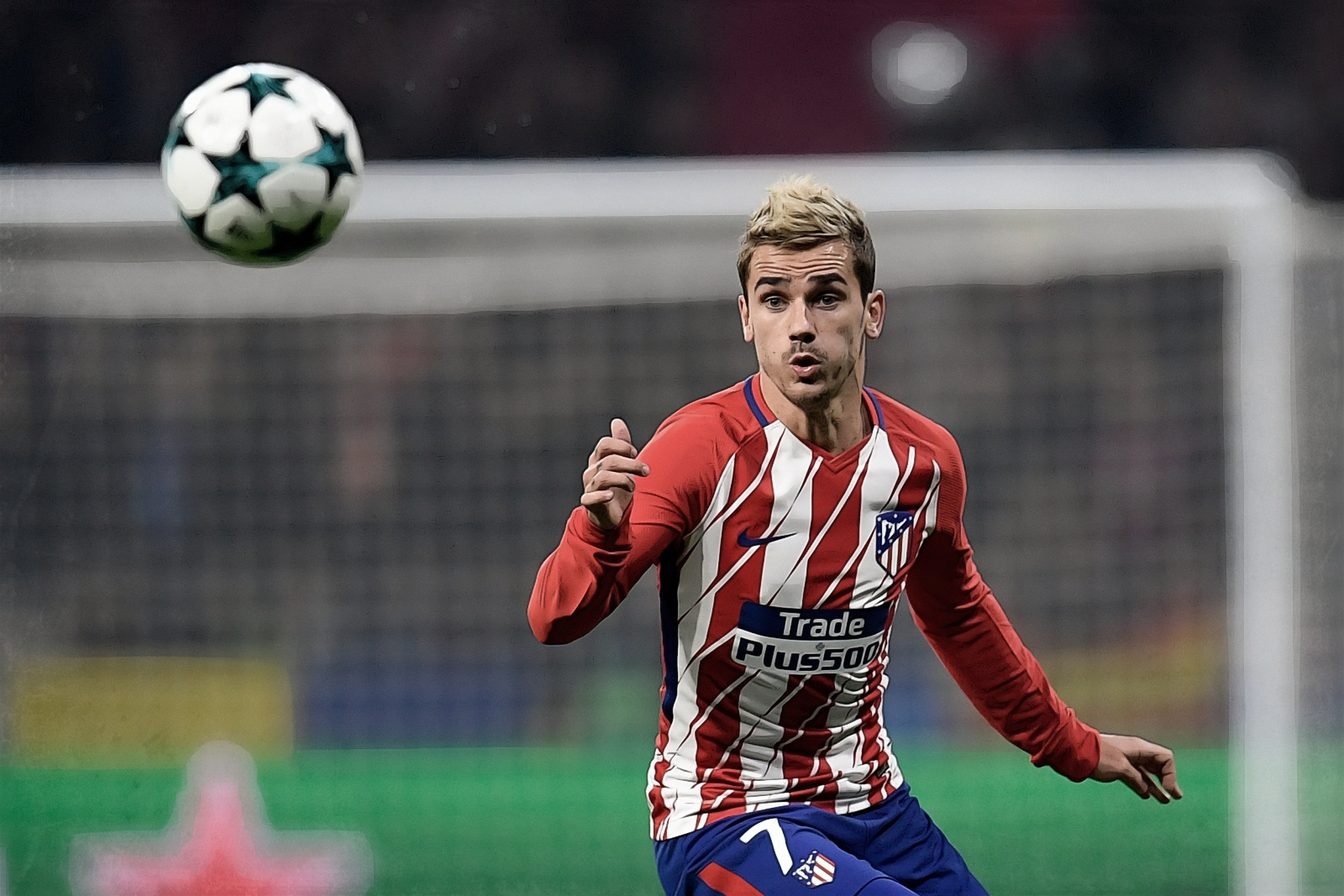 Atletico Madrid was an inch away from claiming this year’s La Liga title as they fell short due to Barcelona’s formidable lineup. Ernesto Valverde’s genius proved too much too handle, while Lionel Messi’s ultra-rare skills were on full blast all-season long.

The star-studded Barca were just in excellent composure throughout the year.

Nonetheless, El Pupas showed that they could also dominate the Spanish top-flight in one way or another, but just can’t win the title.

Atletico forward Antoine Griezmann knows that fact and isn’t very happy with it. Good thing that he’s got multiple options on his current situation.

He can stay with Atletico and work harder so that their chances of winning next year’s La Liga will be higher. Or perhaps just transfer to a better-performing club, Barcelona perhaps?

Barca dominated the Spanish top-flight this season after winning this year’s title. Letting a talented player like Griezmann will surely increase their dominance further because he can man their offense and keep their core intact even in the most difficult of situations.

Well, there are many players who fit that category, but he’s got the biggest chances of joining Barca next season.

Everything to know about the potential transfer

Reports said that the Frenchman is close to signing his deal with Barcelona for the upcoming suffer transfer window. The Catalan club is serious in signing the elite forward, but it seems like Atletico Madrid isn’t too cool with it.

El Pupas had been easy on their previous transfers, but they’re a bit different this time because of Griezmann’s huge importance to the club.

Barcelona President Josep Maria Bartomeu spearheaded the potential transfer of Griezmann to Camp Nou, even to the point of contacting the player’s entourage. This, however, is only one of the signs that Barca is deeply interested with the Frenchman.

Well, that perfectly makes sense though as he’s got elite skills in ball handling, passing, and through balls — things which Barca is not that good at. His style of play will also complement Lionel Messi’s as they both focus on doing layoffs and striking attacks from a distance.

Even Andres Iniesta and Philippe Coutinho will greatly benefit from Griezmann’s added support in the midfield and forward positions. He’s indeed a perfect fit to the Barca offense. But will he sync in with their defensive end?

That’s where the doubts come in.

Samuel Umtiti and Yerry Mina had been working on each other’s style of play, even coming to the point where they can be considered as a working duo. Letting Griezmann supply them with long passes or overly-aggressive attacks might mess up their “synchronicity” which each other.

Though that might not be felt directly, it will surely have adverse effects on their gameplay. Well, this can easily be solved with a little bit of time and adapting.

Let’s talk about the price

The Frenchman currently has a release clause of a whopping €100 million — a pretty expensive bargain, so to speak. However, he's perfectly worthy of that as he's showed his goal-scoring prowess all-season long.

Sports analysts even consider him to be in the same level as Harry Kane, Mo Salah, and even the Argentine hero Lionel Messi, albeit a bit lower. Barcelona might already be jam-packed with superstar talent, but they still believe that getting the Atletico striker at Camp Nou would further bolster their already dominant lineup.
Griezmann’s entry is all about bringing added creativity to the club.

There are numerous other signs that clearly show Barcelona’s interest on the Atletico star. Another incident was last December when Guillermo Amor, the director of institutional relations, said that he had contacted Griezmann and his club agents regarding the possibility of a transfer.

Unfortunately, relations between the two parties soured after a few meetings as Los Rojiblancos nearly filed a complaint to FIFA against Barcelona. Since then, reports about the much-hyped Griezmann transfer slowly faded.

Though there is still no confirmation that the transfer will indeed happen, some of the Barca players have already expressed their sincere joy in welcoming Griezmann to Camp Nou. This isn’t a common thing because the usual reaction of players to potential newcomers had mostly been negative.

This time is an exemption though as they show that they are going to welcome the Frenchman with open arms.

One of them is Barca striker Luis Suarez, who in an interview said that he would happily welcome Antoine Griezmann should he join the Catalan club. The Frenchman is known to have great connections with Uruguayan football players — Martian Lasarte at Real Sociedad, Diego Ifran, Chory Castro, and Diego Godin of Atletico.

In knowing that Suarez is an Uruguayan, there’s no doubt that the two players will have a great time playing side by side if the transfer pushes through.

Griezmann also has a friend inside the Catalan stronghold as national teammate Samuel Umtiti plays as the club's defender. The two already played on numerous occasions for international games, which is a good sign that they already know each other’s plays.

This is a great recipe for league domination should they play together next season.
In an interview, the Barcelona defender clearly stated that he would ask Griezmaann to join Barcelona if there is a chance. Umtiti and Griezmann also have the same style of play because they are into short passes and crossings.

And Umtiti being a defender will greatly benefit Griezmann’s attacking prowess.
It’s just like a yin and yang between the two, with every side helping each other. Letting the two play together will surely create a dynamic duo, despite them being in different roles.

The circumstances allow a transfer

We all know that Griezmann’s jersey number is 7, and transferring to another club would risk him losing that. Though this detail is small, it would still impact his gameplay. However, he doesn’t need to worry about that when he plays for Barcelona because Ardan Turan already left the team during last winter’s transfer market.

The Turkish player vacated his no. seven jersey, thereby making it available for Griezmann to take over. Sports analysts even think that the jersey number had already been reserved by the Barca executives for the potential coming of the Frenchman.

Despite all the talks and hints of his possible transfer to Barcelona, Griezmann still chose to remain silent. The reason, as what most football analysts think, is due to the new contract that the Madrid club is currently working on.

Reports said that Atletico is planning to increase the player’s annual salary as well as jack up his buyout clause to stop him from leaving. This makes perfect sense especially that Griezmann is their biggest star.

His current salary is reported to be a decent €15 million per year, which is in most cases, a bit low for a superstar player like him. It was also reported that Atletico plans to increase his salary to around €20 million, though there’s still no official confirmation that it’s going to be the case.

In the meantime, Griezmann is reported to not yet accept the offer, but interestingly, he also confirmed that he is currently in talks with Los Colchoneros.

With this, it makes sense for Barcelona to speed up the transfer talks before Atletico Madrid finalizes Griezmann’s new contract. It’s said that Barca will have their renewed contract finished before the season ends, so before that happens, the French attacker should well be in the custody of the Catalan giants.

However, that’s not just the reason why Barca should act fast. Another reason is because of the World Cup, which also known to bump up the salaries of participating players. In this case, Griezmann will play for the French national team in Russia, and doing so, would mean Barcelona paying more Euros. That is if they finish the deal after the World Cup.

The hints and reasons why we can expect to see Griezmann in Barcelona don't end there though. Catalunya Radio confirmed that a meeting between the player’s sister and the club happened in a local restaurant in Spain. The report said that they talked about Antoine’s possible contract in Barcelona.

The current La Liga season might have not yet concluded, but plans for next season are already starting to shape up. Having the great Antoine Griezmann in Camp Nou would surely increase their strength further, both offensively and defensively.

The former Real Sociedad player has made 27 goals out of his 52 game appearances — proof that he belongs to the elite class. He’s also made 12 assists that perfectly matches his 78.3% passing success percentage.

With this, it can be said that having him in Barcelona would put his skills to the ultimate test. Playing with the greatest and brightest stars is a big and daunting challenge for him. But it's necessary to progress for him as this would surely mold him into becoming an even greater footballer.