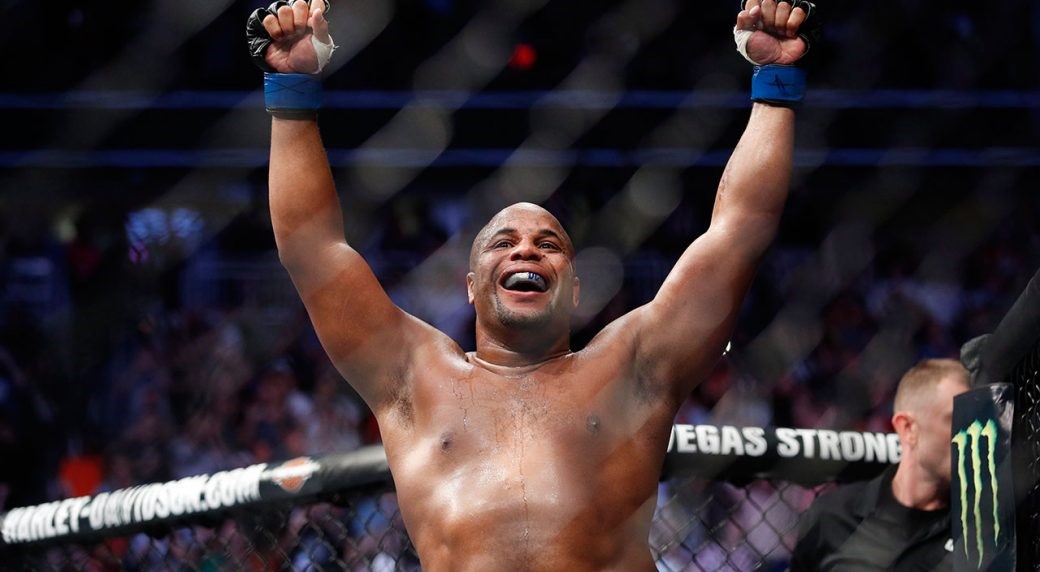 Daniel Cormier Put A Stamp on His Legacy At UFC 230

It has been without doubt the best year of Daniel Cormier’s MMA career. For all the years he walked in the shadow of his bitter rival, Cormier not only stole the show this year. He ran it all year round and he will likely end up being crowned as the best fighter of 2018.

For all the drama that has surrounded DC’s colorful but highly successful MMA career, Saturday’s victory wasn’t without it as well. That’s because before his fight with Derrick Lewis even began, it almost didn’t happen.

Cormier is already 39 years old and on the verge of retirement. He’s no longer a spring chicken and has been known to be suffering from injuries here and there. Most recently, his back has given him problems and according to Cormier, his back almost gave up on the day of the fight itself. Said Cormier during the UFC 230 post fight press conference:

“Sometimes I go into the octagon, and I hear in the build-up, ‘When is this guy going to get old? It could happen overnight. I thought it happened this morning when I sneezed, and I slipped my back out. Seriously. We got some pictures that we may release later in the week. I sneezed, and because I sneezed, my back slipped out. I tried to do my morning run and it wasn’t happening.

“At around 12 or 1 o’clock it was to the point where I was kind of singed over and leaning and Bob Cook said, ‘If you don’t get better, then we’re going to have to make a decision on whether or not you’re going to fight.’ It was real close.”

It was close. But Cormier made it to fight night, walked into the octagon and faced Lewis. One and a half round later, Cormier was declared the winner and with the proclamation came history.

When Daniel Cormier won the UFC heavyweight title by knocking out the greatest heavyweight champion of all-time in Stipe Miocic at UFC 226, he became the second fighter, after Conor McGregor, to hold two world titles at the same time. But after submitting Derrick Lewis on Saturday night, Cormier put himself in a pedestal all by himself when he became the first fighter in UFC history to successfully defend UFC titles in two different weight classes. And yes, not only did Cormier accomplish those remarkable feats, he did so in a span of less than one year, all in 2018.

Prior to 2018, Daniel Cormier’s UFC career has been that of a second class world champion. Sure, he entered 2018 as the UFC’s light heavyweight champion but that was because his rival Jon Jones was stripped of the title for testing positive for a banned substance. Before that, Jones won the title from Cormier at UFC 214, via 3rd round knockout, the first time in Cormier’s career that he had been knocked out.
It was also Jon Jones who handed Cormier his first ever MMA loss in their first bout at UFC 182 in 2015. Jones dominated Cormier from start to finish and won by a wide and clear unanimous decision, winning four rounds to one across all scorecards. Jones’ victory at UFC 182 was an assertion that he (Jones) was the best 205 pound fighter in the planet.

But Jones would be stripped of the belt because of his legal woes and Cormier would fight Anthony Johnson for the vacated title. Cormier submitted Rumble and finally became light heavyweight champion. He defeated Alexander Gustafsson in his first title defense but the public never accepted him as the true champion because he never beat Jon Jones.

A rematch was set at UFC 200 but Jones was pulled from the fight because of a doping violation. Cormier ended up fighting (and beating) Anderson Silva in the event. Cormier’s next title defense was against Rumble Johnson again but because he already beat Johnson before, many still didn’t consider DC the legit light heavyweight champion. Finally, the rematch with Jones was set at UFC 214 but because Jones beat DC easily again and even easier the first time out, Cormier’s legacy always came with an asterisk. Until 2018 came along. 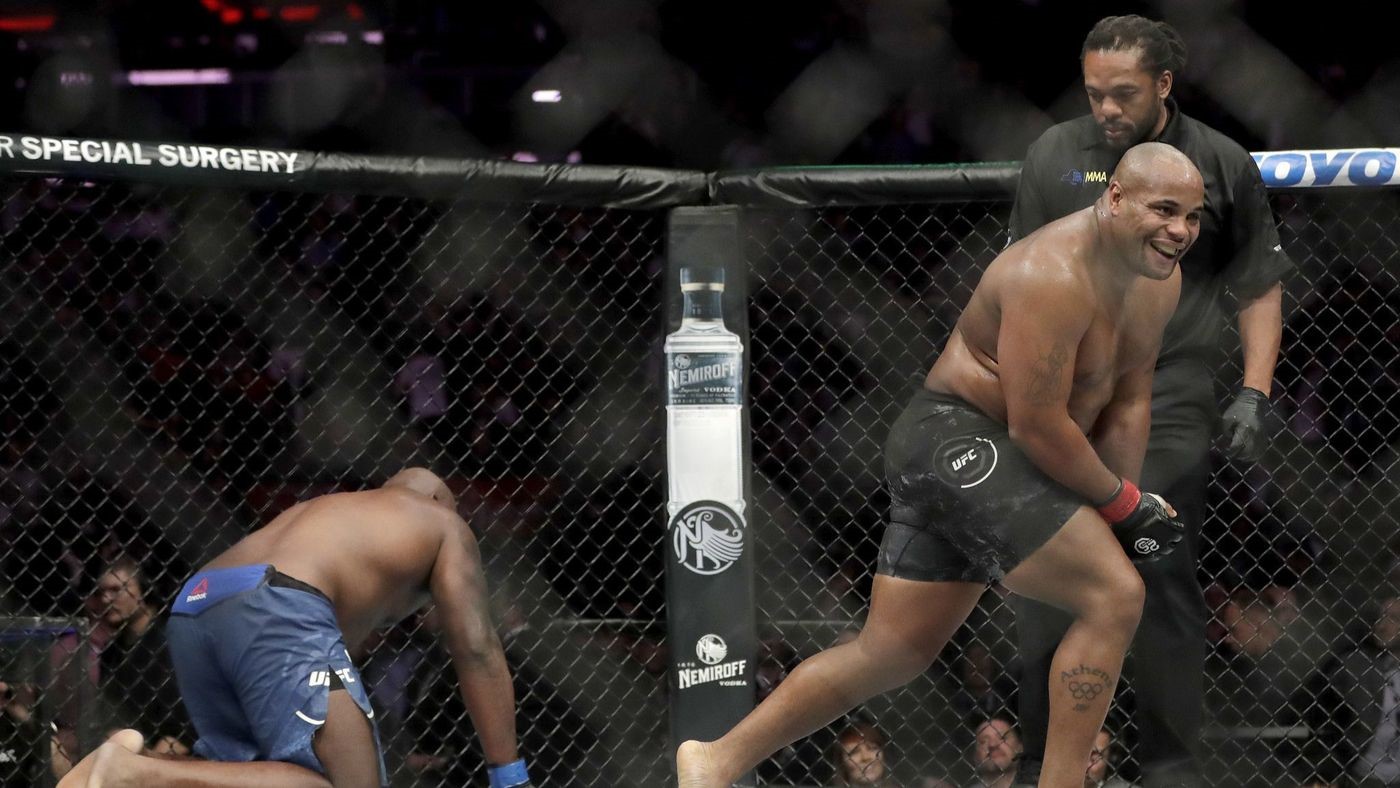 DC opened the year with second round TKO of Volkan Oezdemir to retain his 205 pound belt. Then he knocked out Miocic last July to become double champion. And then on Saturday night, he defended the heavyweight title with an expected but still impressive win over Derrick Lewis.

There are still a few people who don’t give DC credit. Some say the Lewis fight was hastily made and Lewis barely got a 30 day rest from his previous fight. Other say Lewis was an easy prey because he his game has no structure, he has no cardio and his only chance of winning was a lucky punch, the same punch that knocked out Alexander Volkov at UFC 229.

But in case you didn’t know, the Black Beast was officially the #2 ranked heavyweight in the UFC. He entered UFC 230 having won three fights in a row and with 9 wins in his last 10 fights. Sure, he was all of the above, but he was as legit a challenger Daniel Cormier could have faced. And even if everyone expected DC to win, DC did what he had to do, the way people expected him to finish the fight. Isn’t that impressive as well?

And so now DC is going to take the rest of the year off, as expected. And then there is the big possibility that he is going to fight former champion Brock Lesnar at UFC 235 in what is likely Cormier’s retirement fight. Shortly after winning the heavyweight title, Cormier made it known that he plans to retire in March 2019 and that he would probably be fighting two more times before hanging up his four ounce gloves. The first fight was last Saturday. Lesnar, the big money fight, is most probably the last.

There are clamors for Cormier to fight Jon Jones a third time because Cormier has never beaten Jones yet and if he hasn’t, how could he be called the greatest light heavyweight of all-time? Much more the GOAT of all MMA? But whether the third fight happens or not isn’t Daniel Cormier’s fault. After all, he wasn’t the one who failed all those drug tests and all. As for his legacy carrying an asterisk because of Jon Jones, that is no longer the case.

Daniel Cormier has had a year that no one ever had, not even Conor McGregor. And yes, not even Jon Jones. For all of Jon Jones’ skill and talents, he will probably never accomplish what Daniel Cormier has. As for DC, he may have not beaten Jon Jones in a match but given Jones’ doping history, we ought to put an asterisk on Jones’ UFC 182 win over Cormier too because what if Jones was doping and was just not caught at that time? 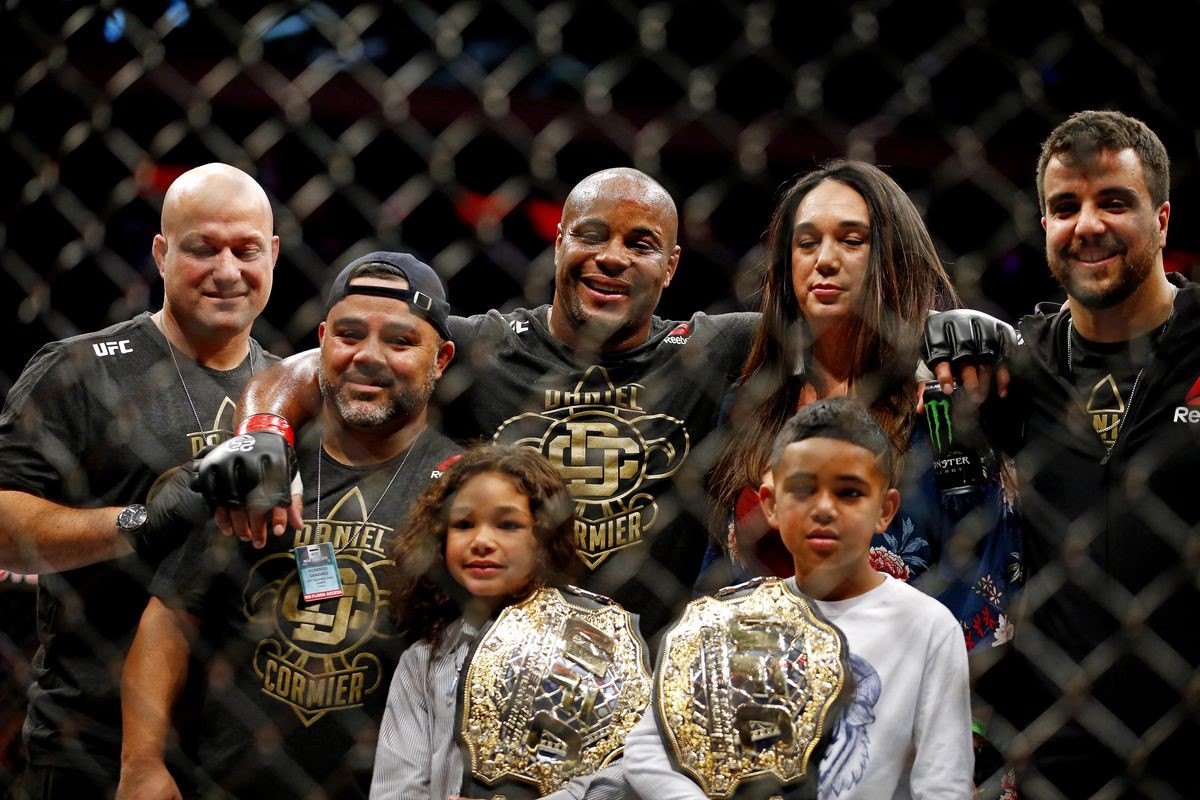 No question, Daniel Cormier has put himself in the conversation as the greatest mixed martial artist of all-time. Aside from the records we mentioned above, Cormier is also 15-0 as a heavyweight. The only reason he fought at 205 was because he didn’t want to fight teammate Cain Velasquez who was heavyweight champion at some point in time. Had he not made the decision, maybe Cormier would still have won the title against Cain, JDS and Werdum. Sure, we will never know but the point is that Cormier is as legit as a heavyweight champion as all of them.

As far as being a 205 pound king, the UFC will strip Cormier of the belt once the bell rings for the Jones vs Gustafsson rematch next month. Even then, Cormier already defeated some of the best light heavyweight of this era in Rumble, Gus and Dan Henderson.It just so happened that he couldn’t beat Jon Jones twice. But remember that even Superman had kryptonite and yet he’s still a superhero. Daniel Cormier doesn’t have a win over Jon Jones. But that doesn’t mean he isn’t an all-time great. That doesn’t mean that he can’t enter the GOAT conversation.

For now, Cormier will probably have to settle for 2018 Fighter of the Year first. That’s probably as sure as McGregor winning the award in 2016 after a breakout year. What follows after that remains to be seen. But no question, DC will retire as one of the greatest ever, if not the GOAT-whether you like it or not. And for a fighter who inexplicably got the hate most of his career, that has got to be the best way to ride into the sunset.