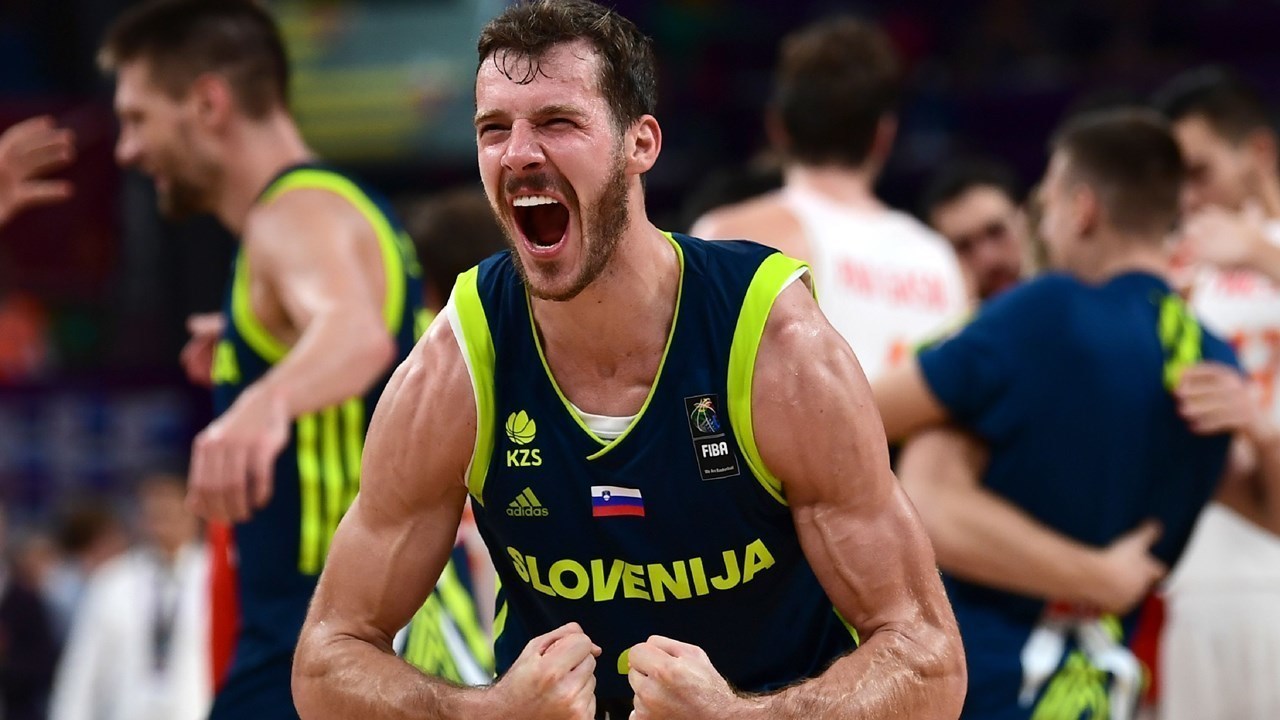 Dragic Was Magic For Slovenia in 2017 FIBA Eurobasket

Goran Dragic said this would be his last international tournament. The Dragon left a lasting impression.

Playing in what is likely his last game for Slovenia, Goran Dragic saved the best for last by scoring 35 points in Slovenia’s 93-85 win over Serbia in the 2017 Eurobasket Finals. The win over Serbia gave Slovenia its first ever Eurobasket title.

It was a historic win for Slovenia whose players, along with those of Serbia, played for the former Yugoslavia way back in the 1991 Eurobasket. A quarter of a century later, Slovenia- a nation of just over 2 million people, defeated Serbia for the 2017 FIBA Eurobasket championship.

On the way to the finals, Slovenia had to get past the mighty Spanish side in the semi-finals. Spain had not just won three of the last four Eurobasket tournaments, it had the most number of NBA players in their roster. Led by Pau Gasol, Marc Gasol and Ricky Rubio, Spain was supposed to run away with the title again. But it was not meant to be. A hot shooting Serbian squad upset Spain 92-72 in the semis.

In the finals, Slovenia also had to deal with Serbia’s NBA players in Bojan Bogdanovic and Boban Marjanovic. But they had their own NBA duo in Dragic and Anthony Randolph. Although he last played in the NBA during the 2013-14 season, Randolph played a total of 252 games in the big league. Dragic is of course, currently plays for the Miami Heat.

Dragic finished the tournament as its 4th leading scorer. Only Aleksey Shved, Dennis Shroder and Kristaps Porzingis averaged more than Dragic’s 22.6 points per game. Dragic also averaged 4.4 rebounds and 5.1 assists per game in his final tour of duty as a national team player.

The Dragon became the first player since 1995 to average 30 points, 5 rebounds and 5 assists per 40 minutes in the Eurobasket. He also shot an impressive 52.0% from 2 point distance, 38.5% from three point land and 84.4% from the foul line during the two week tournament. Sure, Goran was brilliant all tournament long. But Dragic was magic in the finals.

Dragic finished the game on 12-22 shooting, with three three pointers made. Dragic also added a tournament personal best 7 rebounds, 3 assists and 2 steals in the victory. But he had to spend a big part of the second half on the bench and had to watch the final moments on the sidelines due to cramps. However, Goran Dragic already had done enough damage.
He exploded for 20 points in the second quarter alone as Slovenia turned a two point first quarter deficit into a nine point lead at the half. Dragic finished the opening half with 26 points in 16 minutes and on 14 shots. He was a +15 with an efficiency of 28 and scored 1.625 points per minute.

Dragic wasn’t the only Slovenian player hampered by injury in the finals. Luka Doncic, the 18 year old prodigy touted to be a future lottery pick in the NBA, hurt his ankle. Unable to walk on his power after twisting an ankle, Doncic got a piggyback ride off the court from Dragic.

It was a symbolic moment because it represented Slovenia’s current leader ( Dragic ) walking off the court for the final time in a national team uniform together with the country’s future ( Doncic ). Doncic had announced his arrival with a strong performance in only his second tournament for the Slovenian senior basketball team.

For sure, Luka Doncic will be in the NBA soon. How soon? With his spectacular showing at the 2017 FIBA Eurobasket, it won’t be a surprise to see him getting picked in the next NBA draft. In fact, some experts are even saying that Doncic might be the #1 overall pick in the 2018 NBA draft.

The future of Slovenia is certainly in good hands. If Dragic doesn’t change his mind about retiring from international play, Luka Doncic will be their new go to guy. He has proven in this tournament that if given the opportunity, he can and he will deliver the goods for his country.

As for Goran Dragic, he will only have a one week rest before the start of the Miami Heat’s training camp. Camp begins on September 25 with a media day at the American Airlines Arena and will officially begin on September 26th. After Dragic’s stellar play in the 2017 FIBA Eurobasket, the Heat have to be happy.

Goran Dragic is the only true point guard with NBA experience in the Heat’s current 18 man training camp roster. Miami has two other PGs in journeyman Larry Drew II and Derrick Walton Jr. but it remain to be seen if they make the final roster. Combo guards Tyler Johnson and Josh Richardson are likely to back-up and help Dragic man the point for Miami.

The Heat had a bad year in 2016-17. Dwyane Wade left in the offseason while Chris Bosh was forced to retire after continuing to suffer blood clots. Miami opened the season a horrendous 11-30 but got hot during the second half of the season. Led by Hassan Whiteside, Dion Waiters and Dragic, Miami finished the season strong at 41-41. The Heat were tied with the Chicago Bulls for the 8th spot in the East but the Bulls got the playoff ticket via tie breaker.

Despite failing to advance to the postseason for the second time in three seasons, the Heat became only the fourth franchise to win 30 games in the second half of the season. Only the Golden State Warriors had a better record than the Heat beginning January 14. Coach Erik Spoelstra hopes that the strong finish and Dragic’s triumphant return from the Eurobasket will work wonders for the Heat when the NBA season begins next month.