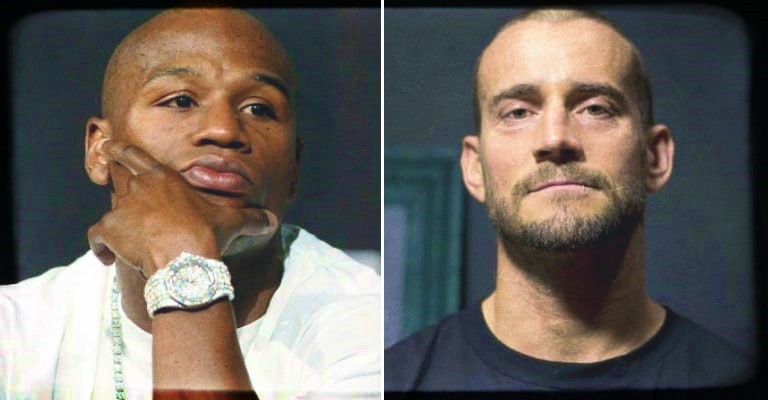 CM Punk is the former WWE pro wrestling superstar whose UFC story is quite interesting. Punk left the WWE to fulfill his ambition of fighting inside the octagon. Punk was well hyped for a good two years but when it was time to make his octagon debut, he failed so miserably.

Following his one-sided loss to Mickey Gall, many felt Punk should not get another UFC fight. But in recent months, UFC President Dana White has changed his mind about giving Punk another UFC shot. Although there has been no name, date or venue mentioned, it is expected that CM Punk will get another crack at the UFC octagon.

Finding an opponent for CM Punk is just as difficult as deciding whether he fights in the UFC again. He simply just doesn’t have enough experience to compete with a legit MMA fighter. But against a newcomer like Floyd Mayweather Jr., that’s an entirely different story.

The talk of a possible Mayweather vs CM Punk bout has heated up so fast that even the gambling gods have established a betting line and installed CM Punk as an early favorite against Floyd Mayweather Jr. should that fight happen. Seriously now? Yes but then maybe things got a little out of hand.

Looking for A Tune-Up Fight?

Leonard Ellerbe, the CEO of Mayweather Promotions, has already shot down those rumors In an interview with FightHub TV, Ellerbe says he’s heard of Punk’s name but he doesn’t know anything about a fight between Mayweather and CM Punk nor it being discussed. Ellerbe is one of Mayweather’s most trusted people and it would almost be impossible for Mayweather to be considering a fight with CM Punk without Leonard Ellerbe’s knowledge.

The whole Floyd Mayweather Jr. vs CM Punk thing originated from an interview with Jeff Mayweather, Floyd’s uncle and longtime trainer. But we all know that since the very beginning, the Mayweather’s prepare Floyd Jr. for every fight but are never part of making the business decisions.

Even in that interview with Jody Kohn, Jeff Mayweather didn’t even know who CM Punk was but said that Floyd Jr. may want to whoop his behind anyway. So while it’s clear that Jeff was trying to say that maybe Floyd is looking for a tune-up fight before actually taking on Conor McGregor in a rematch, boxing’s Money man isn’t zeroed in on anybody ( not even CM Punk for that matter ) yet.

Only Conor McGregor can bring Floyd that kind of money because only McGregor can match Mayweather’s mass appeal. And while UFC President Dana White says that MMA is the only way we’re going to see a rematch between Mayweather and McGregor, Mayweather hasn’t said point blank that he is fighting inside the UFC octagon.

Mayweather has gone back and forth about fighting in the UFC. First he said that he would consider fighting in the octagon for a deal that would net him a billion dollars. Then he backtracked by saying that was just theoretical and that he isn’t considering a move to MMA. But Mayweather recently posted an image of himself in four once gloves, leading with an elbow against a bloodied Conor McGregor. Mayweather even captioned the post “Certified Killa vs certified bitch”.

It’s obvious that Mayweather is merely gauging the public reception of a possible MMA venture. Sure Jeff Mayweather talks about Floyd having a chance of beating McGregor if the fight stays on the feet. But with leg kicks allowed, Mayweather may not go the distance in a fight bound by MMA rules.

Just like Mayweather schooled McGregor inside the boxing ring, McGregor is sure to teach Mayweather a lesson inside the octagon. Sure, that’s gonna make Mayweather money but would Mayweather want us to remember him coming off a loss? That’s a serious consideration considering how hard Floyd tried to kept his spotless boxing records by avoiding some big names late in his career.

But fighting CM Punk is a different story. Punk is a novice in MMA as he was a former professional wrestler under the WWE banner. He’s fought just one MMA fight and lost without landing a single significant blow. If Mayweather truly wants to gauge an MMA career, he may opt to fight CM Punk for peanuts. But again, that is if he is willing to make pocket change while hoping that CM Punk won’t do what Randy Couture did to James Toney.

So Wrong That It’s Right

Floyd Mayweather Jr vs CM Punk fighting under the UFC banner would be a freakshow as both fighters aren’t true MMA fighters. For sure, Dana White would make that a main event and that won’t be a lovely sight for UFC fighters. Not only are Mayweather and Punk taking away their limelight, both also stand to earn more than the usual UFC money.

But while the Mayweather vs Punk fight is so wrong in many ways, it makes sense in some areas, in areas that matter. For Mayweather, Punk and Dana White, it’s a fight that will get the attention the UFC wants and needs right now. It would draw, perhaps not the Conor McGregor vs Floyd Mayweather Jr. money, but it would sell more than the Fight Nights the UFC has been putting up lately.

This is the kind of intriguing match-up that fans like to see. CM Punk and Floyd Mayweather Jr. are big names in their respective sports. It’s a fight that’s going to sell. And for the UFC, it may be the fight that leads to a huge rematch between Mayweather and McGregor. And it’s one that doesn’t disrupt the UFC rankings at all ( because it shouldn’t ).

So, Mayweather vs CM Punk? Don’t bet against it. We’ve seen stranger fights getting booked. Don’t look too far. Who would’ve thought that Conor McGregor would box Floyd Mayweather Jr. under full boxing rules? Sometimes all a fight has to do is sell to happen.