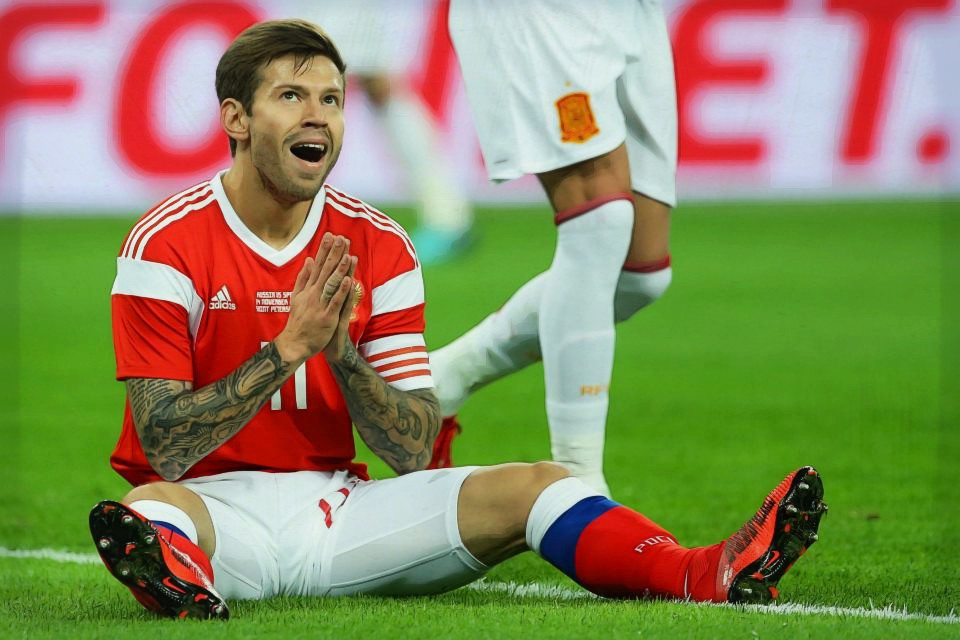 The 2018 FIFA World Cup will commence in Russia in one month, and the best players in the world are hyped up for this once-in-every four years event. Among the favorites to win this year’s title is Germany, Brazil, and Belgium.

But what about the home country, Russia?

Well, the excitement among Russian fans are also brewing, and it gets stronger as the tournament nears. But can they make it?

Well, the likelihood is quite bleak as they’re nowhere to be found in the current top ten power rankings. In fact, they're even out of the top 50 teams as they're struggling even to maintain their 66th spot in the rankings.

So does this mean it’s a done deal for the Russians? Probably not, as there’s Fyodor Smolov vying to defy the odds.

The 28-year-old striker is the country’s best and only hope. Russia is in dire need of a hero, and Smolov could be just that guy. Sbornaya had been doing pretty bad over the past World Cups. Fortunately, the odds are much friendlier to them now as they’ve got a superstar who’s expected to carry the team to bliss.

This comes as a surprise to most non-Russian football fans as the Krasnodar striker had been the stuff of criticisms over the past years. He had even been treated as a comedic meme due to his issues on and off the field.

Fortunately, all those have passed as he showed that he has grown from a self-centered one-man show to a strategic team-player — the things which brought hope to his brethren. His previous unimpressive scoring had become a thing of the past after helping Krasnodar make it to the top five of the Russian Premier League.

Now, Byki is enjoying a comfortable fourth spot status in the competition. They might not yet be considered as a title-contending club, but they’re on their way there.

Smolov defied the odds and silenced critics with his drastically improved scoring capability. He proved to be an unstoppable attacking force as he even topped the scoring charts of the Russian Premier League for two straight seasons.

He's even on track to win his third scoring chart achievement this year — a huge feat for an underplayed striker. His versatility is also at play with his striking and passing prowess, which even enabled him to score five goals in 2017 for the Russian national team.

In an interview, Smolov talked about his situation and said that it’s hard for him to stay at his current place. He said that improving his skills is easier than being satisfied with his current situation.

His interview with FIFA also talked about how he motivated himself to be better. Smolov said that his motivation drops when he reaches a certain milestone. This is the reason why the striker is always in search of higher and more challenging milestones. Becoming the best version of himself is his life’s motto.

Constant improvement is necessary if you want to be one of the greats, Smolov added, as his opponents always find a way to adapt to his game. The former Dynamo Moscow player also stated that his defenders would just leave him after a few minutes of play in the past, but now flock him all throughout the game because of his bigger offensive responsibilities in the field.

He might still be new to this kind of play, but he’s slowly adjusting, he said. When asked if he's now playing the best football of his career, the center-forward said "hardly." This is a humbling response from an achieving striker. Take note that he contributed over 60 goals to Krasnodar in just three seasons.

Smolov then confidently added that his career would likely peak at the World Cup, implying that the world has not yet seen how good he has become over the years.

We all know how last year’s FIFA Confederations Cup turned out. Sbornaya defeated New Zealand 2-0 in striking fashion with Smolov leading the way. He was even voted as Man of the Match — proof of his great leadership skills throughout the campaign.

Unfortunately, all those came to an end as the Russian side lacked support midway through the competition. All was on Smolov, and he wasn't prepared to take such a heavy responsibility.

So what happened was that they were kicked out of the Tournament of Champions after sustaining consecutive losses from Portugal’s 1-0 thrashing and Mexico’s 2-1 victory over them.

The striker said that they lacked experience during those games. However, he strongly argued that they were not outplayed because their losses were caused by their own mistakes. If they only prepared properly for the games, then they would not have been eliminated.

The little details count, he said, and these were the ones they failed to consider.
Smolov then cited an example when he fell short of a few centimeters in making a header during their stint with Portugal. As much as he wanted to call it as a failed opportunity, Smolov remained hopeful and said that the experience taught him a lesson that he could apply in the World Cup.

It has been Smolov’s dream to play in Europe's top leagues. But up to this day, he still hasn't received any enticing offers from top-tier clubs. Nonetheless, he has been actively seeking out his dream's fulfillment with what we can see with his constant improvement in the field.

Striking is one thing, and defending is another — two skills which he needs to master.

In an interview, Smolov said that he had received an “amazing offer” from China, but he realized that he would lose the chance of playing for a top European club that if he signed.

Smolov chooses his ambitions over the lure of money.

As of now, Champions League-caliber clubs are a bit skeptical about getting Russian players because of the stereotype that they’re too aggressive and uncoordinated. Though these aren’t very true, it’s still believed to be one of the biggest roadblocks for Russian players to make it to international fame.

However, all these could change once Smolov excels with Sbornaya this World Cup.

Maturity at its finest

No one is born a champion, and the Russians know that for sure.

This saying is their guiding principle as it gives them the hope to excel despite the odds. It was a tough start in the World Cup friendlies for the Russians after suffering huge 3-0 and 3-1 defeats at the hands of the Brazilians and French respectively.

What’s even worse is that forward Aleksandr Kokorin sustained a cruciate ligament injury, which ruled him out of Russia 2018. Smolov was deeply disappointed with the incident as he captained the Russian team on that game. He also has a deep connection with Kokorin whom he played with since they were kids.

As unfortunate as it may seem, it still did the Russian team some good as it re-ignited Smolov’s thirst for victory. Being 28-years-old and having his confidence at peak level, it’s safe to say that he’ll be on full blast when the World Cup rolls in.

Smolov said in an interview that he’s ready to take a much heavier responsibility this time — then again showing his high confidence, which is just what they need in the World Cup. He also added that he would make the most out of their home court advantage even if they're not considered as a tough contender in the competition.
Uruguay is one of the best football powerhouses in the world and going head-to-head with them in the group is no easy feat. Despite this, Smolov believes they can make it as they have gained enough experience to figure out Oscar Tabarez’ strategies in the friendlies.

Aleksander Kerzhakov and Artem Dyuba will support him in the attacks while Igor Akinfeev and Yuri Lodygin will take care of the goal defense. They’re now a more battle-ready team, so to speak.

Their key midfielder might be injured, but they still got a lot of reserves. Aleksandr Golovin, Sergei Ignashevic, and Payel Mamayev will also help bolster their defensive games.

He had been through a lot since the start of his career. From seemingly endless dry spells, unending criticisms from the media, and a barrage of on and off-field issues, it's safe to say that the Russian is one big survivor.

Nonetheless, these challenges have molded him into a better footballer. In fact, his overall rating of 7.38 makes him one of the elite center forwards in Europe. Yes, Spain and Brazil are powerhouses, but Russia does have a chance to compete with these giants.

That is if Smolov does his best. His passing success percentage of 70.8% is proof that he’s a team player — just the trait Russia needs to overcome Argentina’s Messi-led one-man show, or perhaps Brazil’s power duo of Neymar and Philippe Coutinho.

Smolov’s prowess in finishing plays and making long shots will also help Stanislav Cherchesov’s aggressive gameplay. Though the 28-year-old’s crossing and defensive contribution fall a bit short, forwards Kerzhakov and Dzyuba will surely make up for those weaknesses.

Let’s just hope that Cherchesov will implement a more short-sided and layoff-oriented game plan so that Smolov can enact his game in the highest level possible. When that happens, then Russia’s chances of making it to the top ten will surely increase.