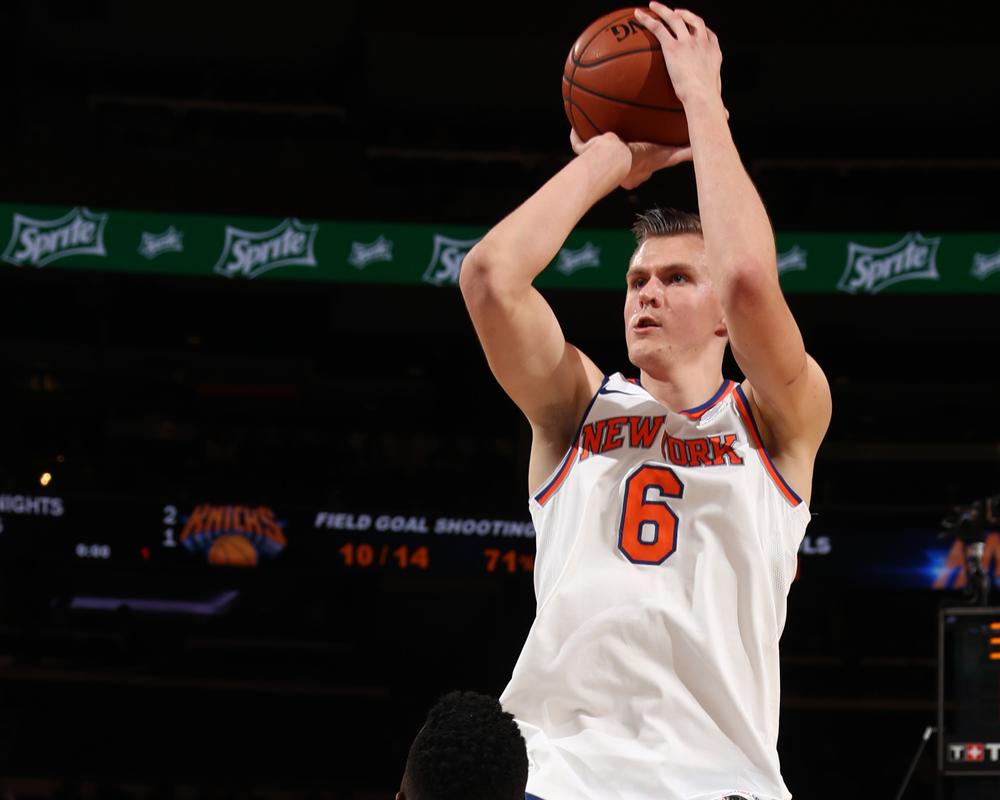 Kristaps Porzingis Has Taken Over In New York

If you’re freaking out with the Greek Freak in Milwaukee, the other NBA unicorn has equally been heavenly in New York. Antetokounmpo’s hot start has gotten the attention of the likes of Kevin Durant and LeBron James but Kristaps Porzingis has brought the Knicks back to life after an 0-3 start to the season. New York has won three in a row, including two on back to back nights.

The 22 year old Latvian has been nothing but spectacular for the Knicks at the start of the season. He’s not only putting up big numbers and establishing team records but he has the team re-thinking about possibly tanking this season. If the Knicks continue with their improved play, they might even make the playoffs in a ‘weaker’ Eastern Conference. 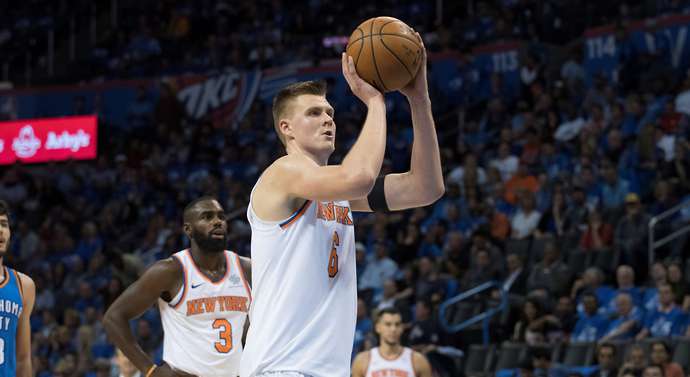 During Monday’s 116-110 win over the Denver Nuggets, Porzingis topped his own Knicks record by recording his fifth 30 point game in the first six games of the season. In the same game, Porzingis set a new career high with 38 points on 14-25 shooting including 4-7 from three point distance.

Against the Nuggets, Porzingis was matched with another European prospect in Nikola Jokic. The ‘Joker’ dropped 40 points Porzingis on the Knicks in his only Madison Square Garden Appearance on 2.10.17 last season. This time around, a much improved Porzingis got the better of Jokic for the first time in their NBA careers.

On Monday, Jokic scored 28 points and grabbed 8 rebounds but it was Porzingis who was the story of the ball game. Forget the fact that the Knicks nearly blew a 22 point lead in a third quarter meltdown against the Nuggets. Porzingis displayed the total package against Denver. Man, he looked like a demigod for most of the game and we’re not even exaggerating.

Not only was Porzingis hitting tough fadeaway jumpshots:

KP is a freak pt. 1 pic.twitter.com/J9P2brdysi

Get you a unicorn who can do both pic.twitter.com/mlPPk2c24W

He was also doing it on the defensive end:

Heck, he was even flirting with Steph Curry territory, shooting a three one step from the logo:

Lordzingis now pulling up from a step outside the logo. Bye. pic.twitter.com/SjIxa6QuAL 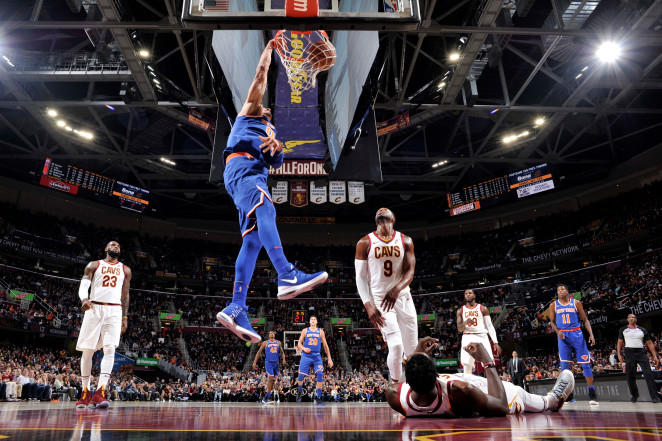 Three games ago, Knicks’ fans were screaming for Jeff Hornacek’s head when the post-Melo Knicks opened the season with three straight losses. But after Hornacek tweaked the starting five by inserting veteran Jarrett Jack as the starting point guard, the Knicks have looked like an entirely different ball club.

As Jack started to provided the stability on offense for the Knicks, Porzingis began to assert his might and impose his dominance on the defensive end of the court. In the last three games, Porzingis has averaged 9.33 rebounds and 2.66 shot blocks per game. As a team, the Knicks have allowed just 97 points per game in the last three games after giving up an average of 108.67 points per game in their first three outings.

The Knicks’ surge and Porzingis emergence isn’t a surprise at all. During the offseason, Porzingis worked on his game while the Knicks shopped Carmelo Anthony. Not only did Porzingis improve his repertoire, he also worked on his strength and conditioning. And his much improved physique has reaped its rewards on both ends of the floor. 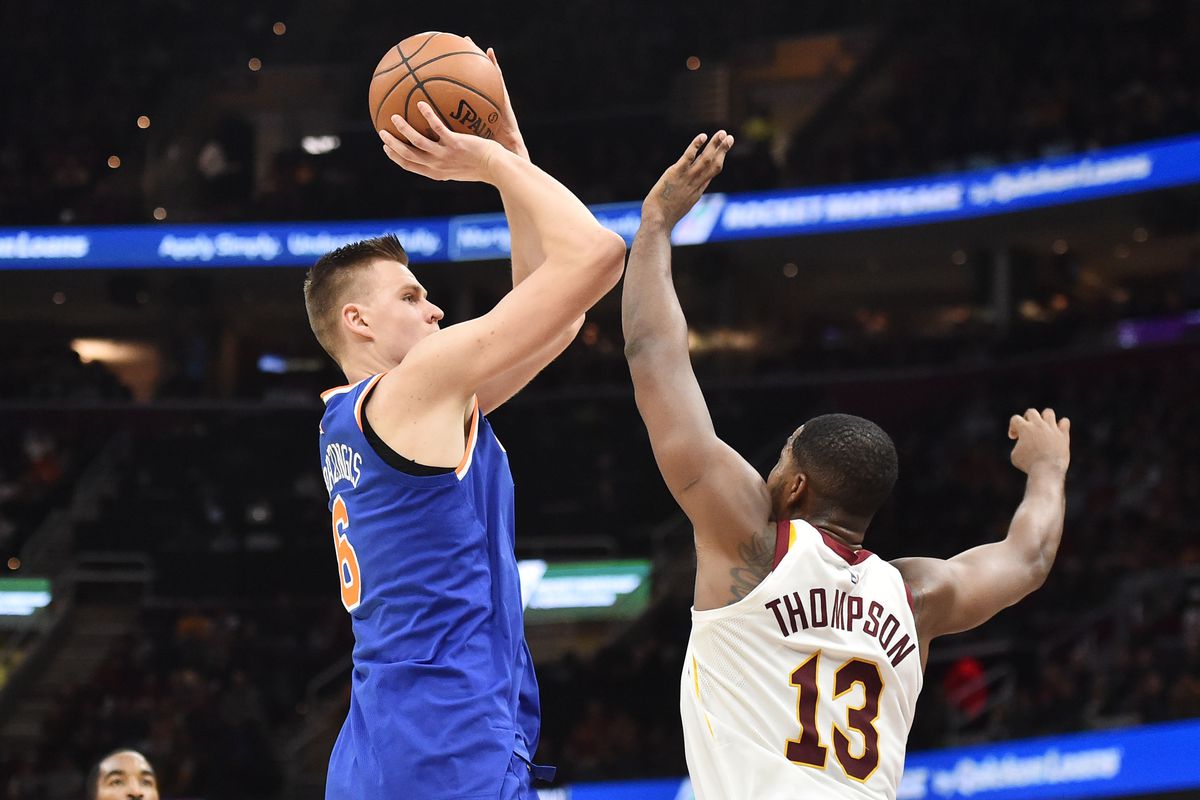 Not only is Porzingis averaging more rebounds per game ( 8.3 this season versus 7.2 last season ), his defensive rating has also improved to 103.6 from 107.7 a season ago. Apart from his increased ability to match-up defensively with heftier opponents, Porzingis’ offensive arsenal has likewise been upgraded.

The increase in free throw attempts from 3.8 per game last season to 7.0 this year is proof that he is no longer hesitant to take the contact. With his smooth shooting touch, this raise is a welcome development for the Knicks. Also noticeable is Porzingis increase in Points in the Paint from 6.5 per game during the 2016-17 season to 10.7 in the first six games of 2017-18.

The development of an inside game isn’t just the only offensive enhancement that Porzingis has brought this season. The Latvian unicorn is also shooting the ball better at 47.8% from the field and 36.4% from the three point distance. While these shooting stats aren’t significantly better than last season’s numbers, the fact that Porzingis has taken 7.8 more field goal attempts per game this year makes them pretty special. 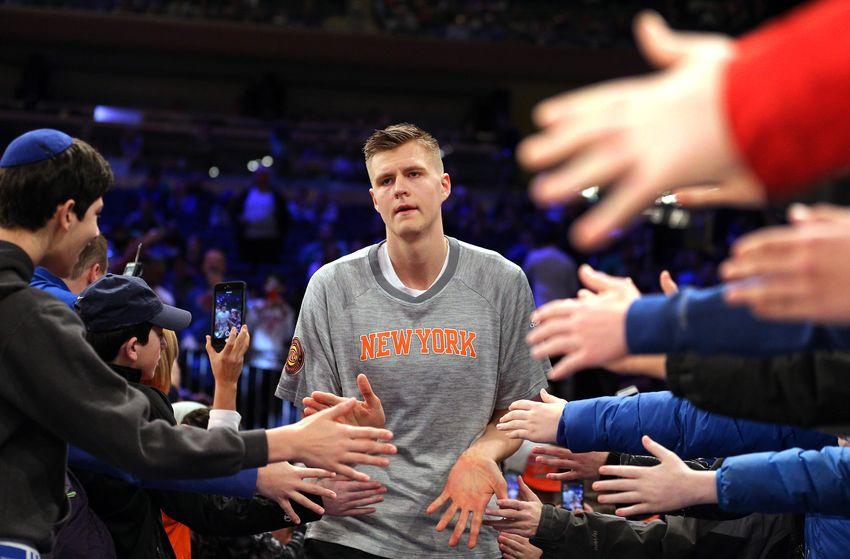 During their 2017 Survey, NBA GMs named Antetokounmpo as their overwhelming choice as the best international player currently in the NBA at 69%. Interestingly, Jokic ( 14% ) and Memphis’ Marc Gasol ( 10% ) got more votes than Porzingis. You can’t take away what Giannis is doing in Milwaukee. But given how Porzingis has performed so far, it looks like a 50-50 split between the two right now.

Likewise, Antetokounmpo has been the early name linked to the 2018 NBA MVP award. No question about that. But after his career night on Monday against the Nuggets, the crowd at the Madison Square Garden chanted MVP for Porzingis. You can’t question them either.

Porzingod, Mountzingis, Lordzingis or Godzingis or whatever fans are calling Porzingis right now are cute. What may be more appropriate really is Madison Square Guardian. Because after Carmelo Anthony left, Kristaps Porzingis has taken over as the Knicks’ main man and the defender of one of sports’ most revered buildings.