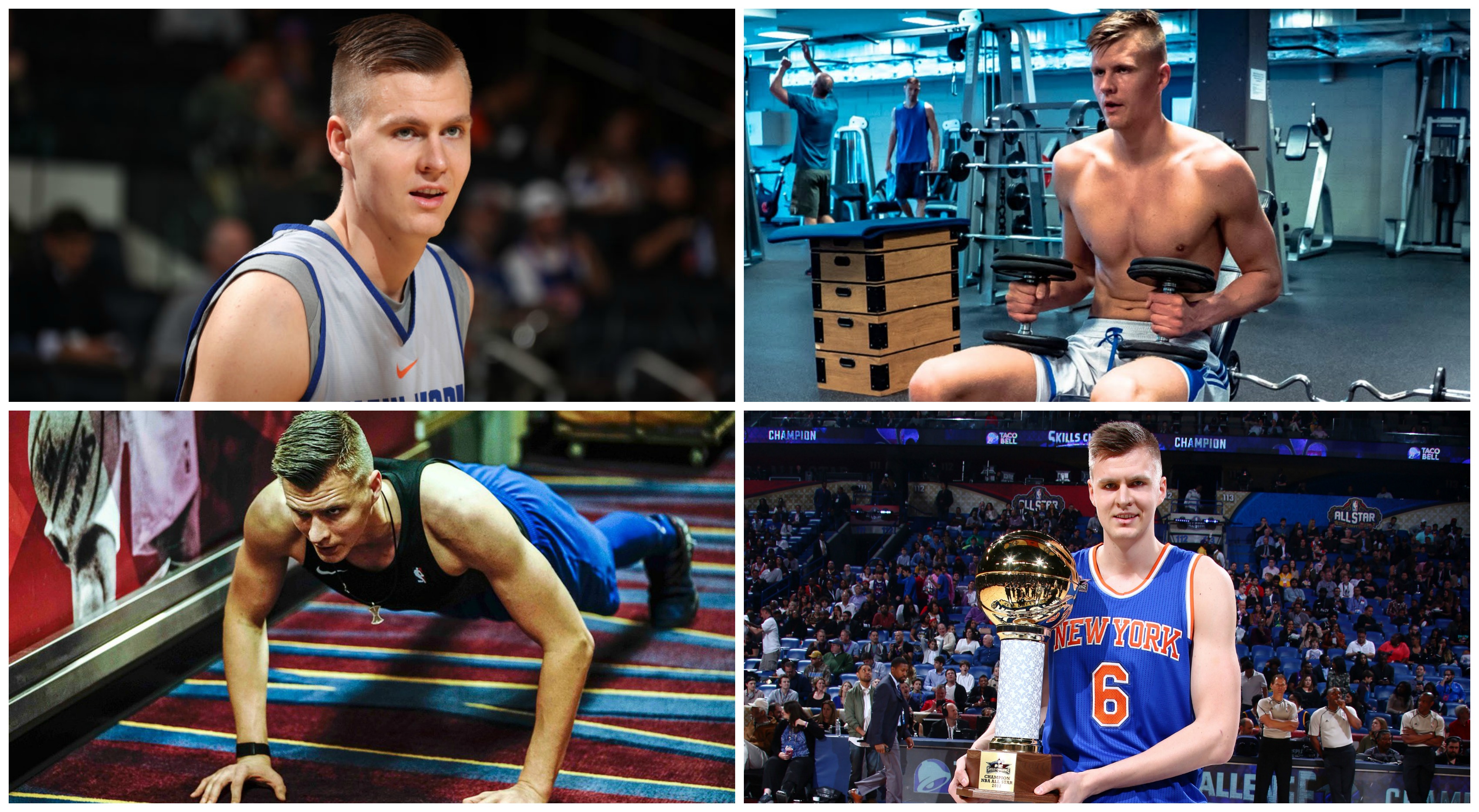 Kristaps Porzingis is More Than Just Your Ordinary Big Man

Height they say is might so it isn’t any wonder how the world’s tallest basketball players found their way to the premier basketball league in the planet - the NBA. 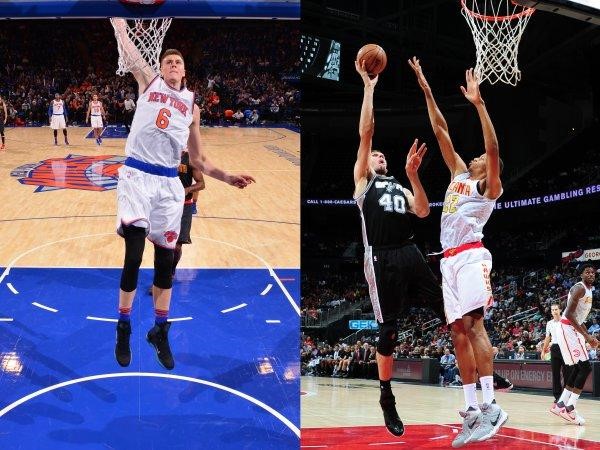 In the history of the NBA, there have been 23 players who measured at least seven feet and three inches ( 7-3 ) or taller. The tallest players in the history of the NBA were Gheorghe Muresan of Romania and the late Manute Bol of Sudan. Both behemoths were listed at 7-7 although Muresan was considered as slightly taller than Bol because the latter officially measured at 7-6 ¾ by the Guinness Book of World Records.

Among the NBA’s human skyscrapers, Muresan lasted the longest in the league, playing a total of 307 games from 1993-2000. On the other hand, Bol was one of the NBA’s premier shot blockers and is currently ranked 17th on the all-time list. He owns the distinction as the only player in the league to have more career blocks than points.

The most popular and successful giant to play in the NBA is none other than Chinese superstar Yao Ming. Yao was measured at 7-6 and was the Houston Rockets’ #1 overall pick in the 2002 NBA Draft. He was voted to start in eight NBA All-Star teams and was a five time member of the All-NBA team. Yao is the tallest player to play in the NBA All-Star game and is the tallest inductee to basketball’s Naismith Hall of Fame. 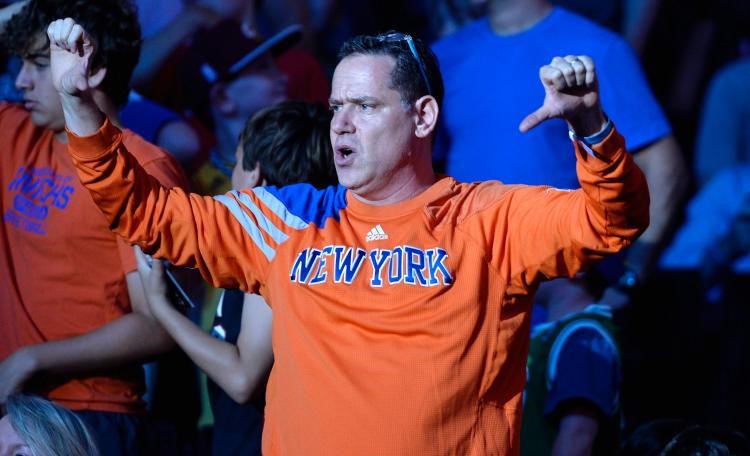 Currently, there are two players in the NBA who stand 7-3 or taller. The tallest player in the league today is Boban Marjanovic of the Detroit Pistons. The 29 year old Serbian is officially measured at 7 feet and 3.5 inches ( 2.22 m ). Slightly shorter than Marjanovic is 7-3 Kristaps Porzingis of the New York Knicks who is the topic of our article.

The 22 year old Latvian was the Knicks’ 4th overall pick in the 2015 NBA draft out of Latvia and his selection in the draft didn’t come without any controversy. When Porzingis’ name was announced by NBA commissioner Adam Silver on Draft night, he was greeted by jeers and boos from the Knicks’ hometown fans who trooped to New York’s Barclays Center hoping the Knicks would pick either Duke’s Justise Winslow or Emmanuel Mudiay.

Porzingis was a 233 pound giant who resembled a lamppost more than he did a lottery NBA pick. He was a virtual unknown to fans because he didn’t play college basketball and instead played in Spain. Even in Spain, he didn’t stand out as a star with his numbers. That’s where all those boos came from. But if there was something good that Jackson did during his disastrous stint as Knicks’ president, it was drafting Kristaps Porzingis. 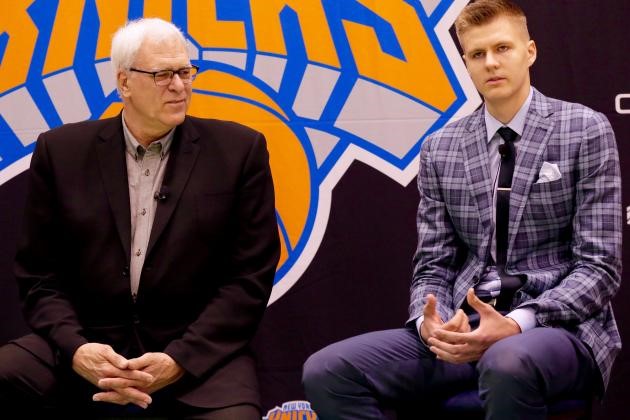 Jackson won six NBA titles as head coach of the Chicago Bulls and was supposed to bring his Midas Touch to New York. Instead, the Knicks consistently languished in the bottom of the NBA’s team standings during his tenure. To add to his woes, he made the unpopular choice of picking Porzingis in 2015.

“I have no idea what Phil Jackson is thinking,” said Mark Dantuono, 17, of Staten Island. “Maybe he thinks he’s going to be the next Pau Gasol, but I don’t think so. This is the worst thing I’ve ever lived through as a Knicks fan. He didn’t score that many points in Europe. What’s he going to do in the NBA?”

Two years later, the fans are surely regretting why they booed Kristaps Porzingis on draft night because he would become Phil Jackson’s legacy in New York. What the fans didn’t see on draft night in 2015, Jackson and his scouts did. And now, the rest of the world is beholding Porzingis’ emergence. 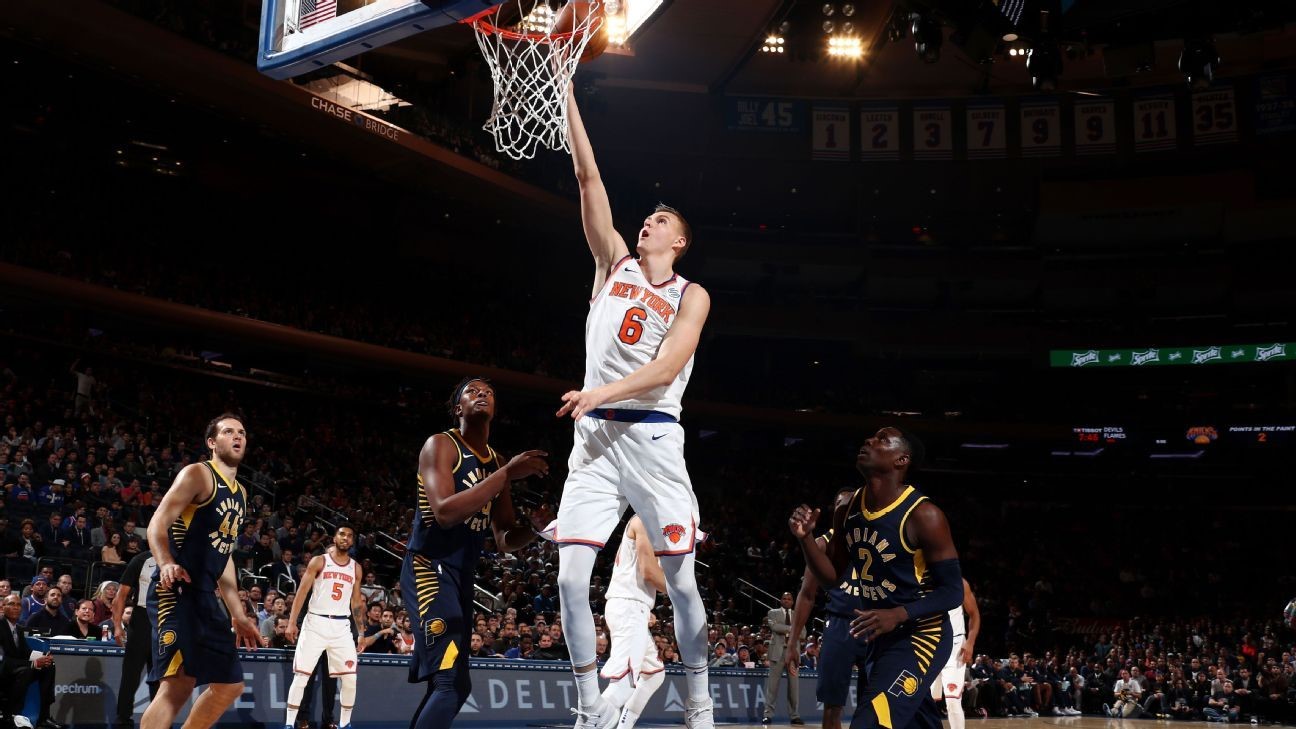 To the surprise of his critics, Porzingis played an excellent rookie season He became the first player in NBA history to score at least 1000 points, grab at least 500 rebounds, block at least 100 shots and shoot at least 75 three pointers during his rookie. For his accomplishments, he was named to the NBA’s All-Rookie team and finished 2md behind Karl Anthony Towns in the balloting for Rookie of the Year honors.

If Porzingis rookie year was surprising, his second season in the league even exceeded much higher expectations. Porzingis increased his scoring average from 14.3 during his rookie year to 18.1 points per game during his sophomore season and began to show signs that he could be the next big thing in the Big Apple. Porzingis showcased his all-around skills when he won the Taco Bell Skills Challenge at the 2017 NBA All-Star Weekend.

Yet despite proving his critics wrong during his first two years in the league, Porzingis was not done. What he achieved was just the tip of the iceberg. Porzingis wasn’t just going to be a good basketball player. He was destined to become even greater than perhaps what Phil Jackson ever imagined.

The Emergence of Porzingis 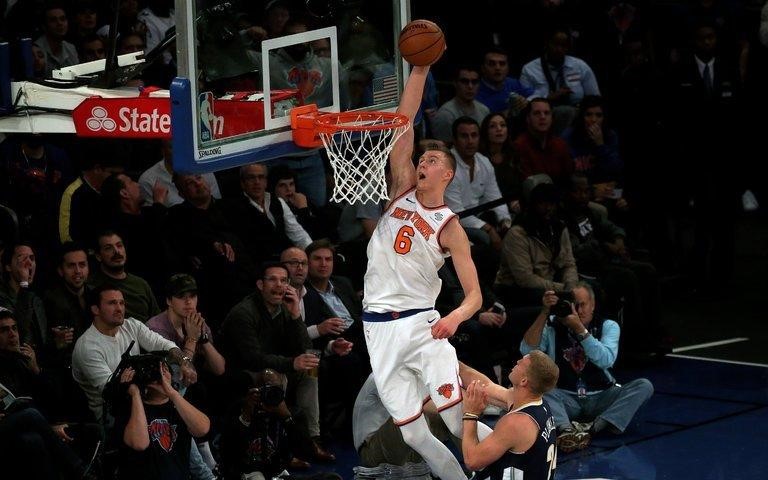 Before the current 2017-18 NBA season began, the Knicks traded longtime franchise player Carmelo Anthony to the Oklahoma City Thunder. That move signalled the transition to a new era in New York. The emergence of Kristaps Porzingis in the previous two seasons was enough to give him the keys to the car. And boy, was he ever so ready.

Porzingis is off to a torrid start to the 2017-18 NBA season. He became the first Knicks’ player to score at least 30 points in five of the first six games of any regular season. After setting a career high 38 points against the Denver Nuggets on October 30, 2017, he re-set it five days later by pouring in a career-best 40 points against the Indiana Pacers.

Through 10 games, Porzingis had the best start to a season by any Knick in history. He scored 300 points in their first 10 games, beating the franchise record 298 set by the legendary Bernard King in 1984-85. Patrick Ewing has been the standard for the Knicks’ greatness in recent memory but King was the best scorer to wear a Knicks uniform in this era. Porzingis emergence may change both. 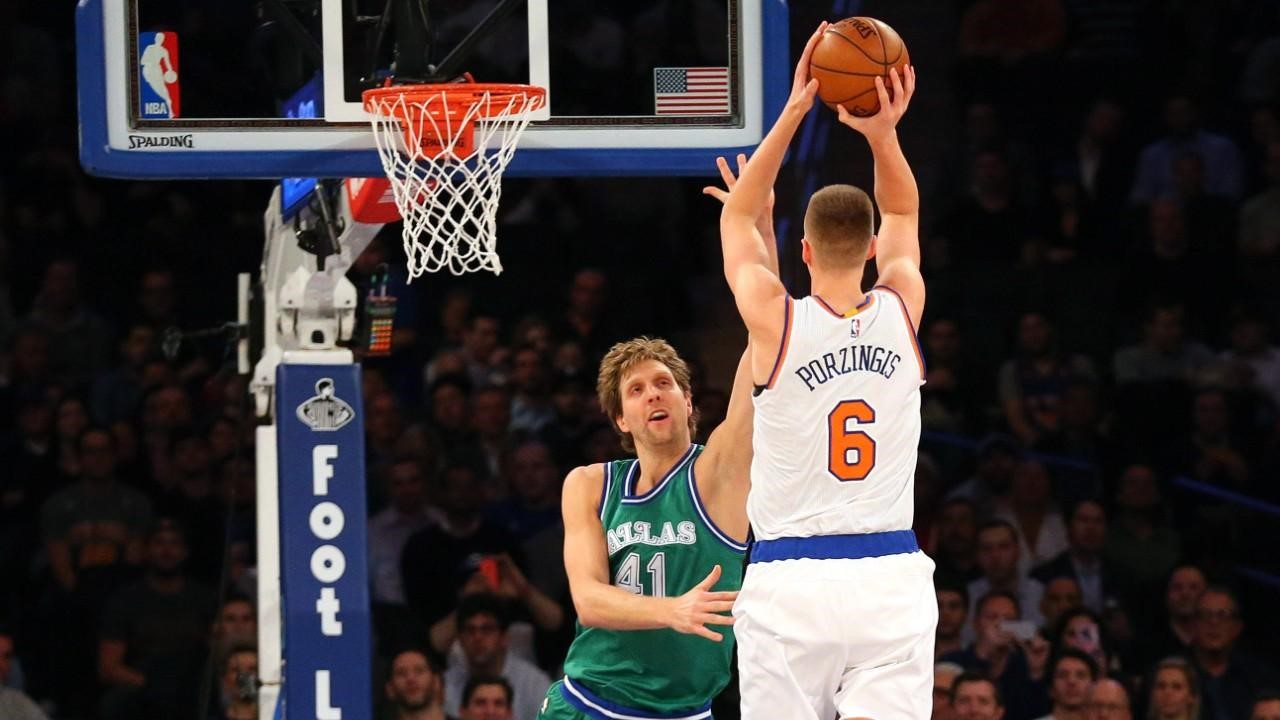 Unicorns don’t exist but Porzingis is often referred to as one because like a unicorn, he isn’t supposed to exist. Actually, there are a trio of NBA players right now who have the right to call themselves as unicorns. There is Karl Anthony Towns in Minnesota, Giannis Antetokounmpo in Milwaukee and of course Porzingis.

Antetokounmpo is drawing waves for his do-it-all effort with the Bucks but when it comes down to being really unique, Towns and Porzingis stand out because of their ability knock down the three pointer better than many guards. Porzingis and Towns are two of eight power forwards and centers who have made at least 25 three pointers this season. Among the 8, Porzingis and the Magic’s Nikola Vucevic are the only pair to shoot above .400. Porzingis tops the list with his .416 accuracy from three ball. Considering he is the tallest in the list, that’s pretty impressive.

In an era ruled by the three point shot, the position of stretch four has emerged, highlighting the need of big men to shoot from the outside. The emphasis of top teams like the Golden State Warriors and Houston Rockets to shoot three pointers and the Boston Celtics’ positionless basketball has made versatility the name of the game today. Kristaps Porzingis is one of the most versatile big men the game has ever seen. 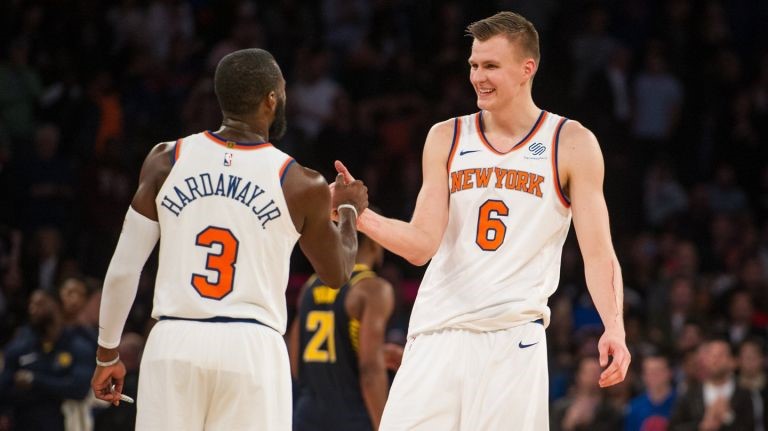 Porzingis has been often hailed as the ‘next’ Dirk Nowitzki, owing to his smooth and sweet shooting touch from the outside. But Porzingis doesn’t just have range. He also has soft hands that give him the ability to finish with finesse around the basket. Not only that, he has added enough weight during the offseason so he can finish strong above the the rim, even while taking full contact.

Scoring has been Porzingis meal ticket. But that doesn’t mean he’s just a scoring machine. Porzingis also averages 7.3 rebounds and 2.17 blocked shots per game, making him also a force on the defensive end of the floor. Porzingis currently ranks 3rd in the league in scoring and 4th in shot blocks.

Thru 13 games this season, the Knicks are 7-6. That’s not really an excellent record but given how the Knicks have been very bad in the last couple of years, their current performance is seen as one of the major surprises of the young season. Of course the Knicks can owe their success to the acquisition of new players like Enes Kanter, Doug McDermott and rookie Frank Ntilikina plus the much improved Tim Hardaway Jr. But there is no doubt that the renaissance in New York has been brought about by the spectacular play of Kristaps Porzingis. The future of New York has never been this bright. The fans who booed Porzingis on draft night? They’re chanting MVP right now and you can’t blame them.