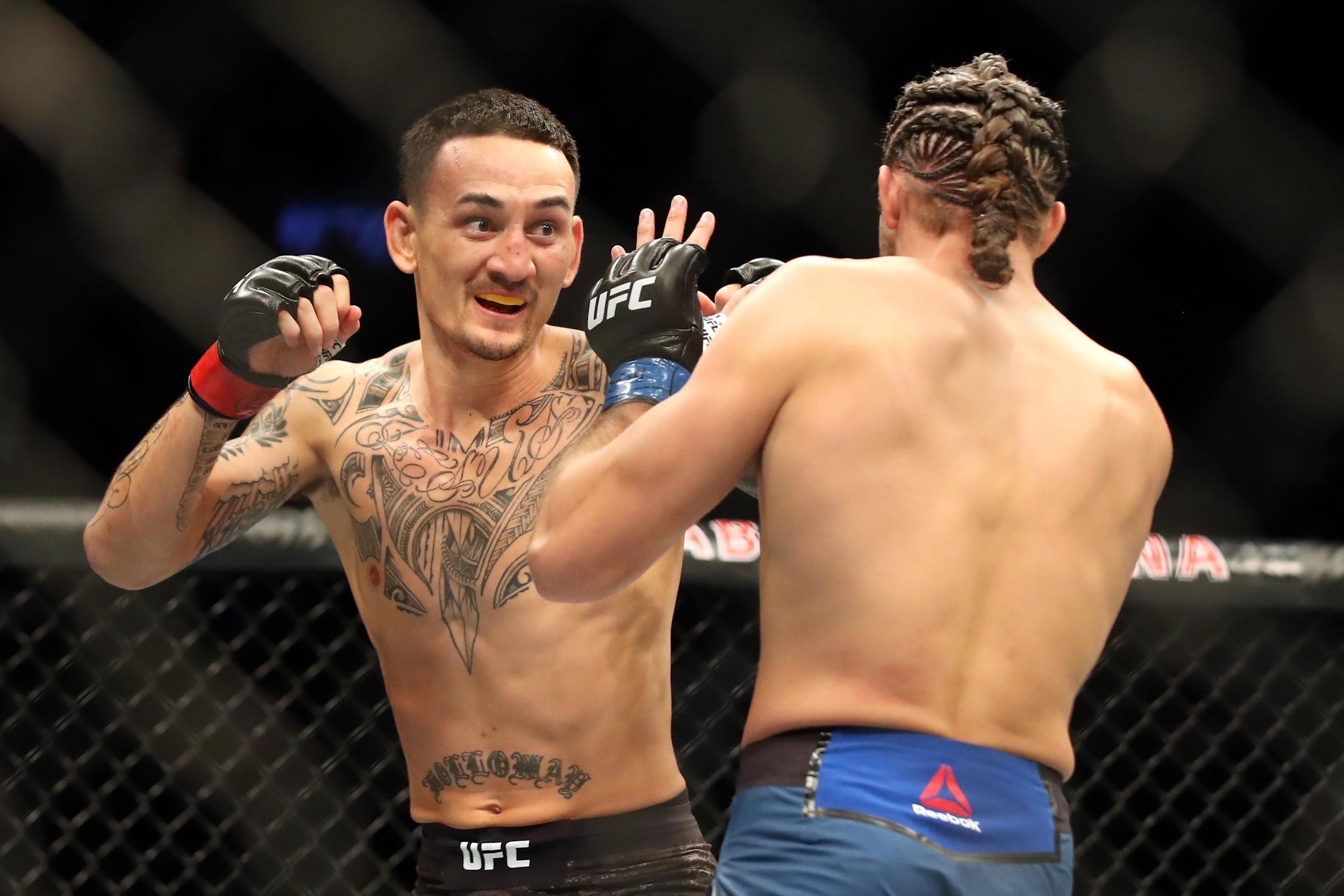 Max Holloway better change his nickname to Brutal instead of Blessed.

The UFC’s featherweight champion battered and bloodied challenger Brian Ortega in four brutal rounds of action at the Scotiabank Arena in Toronto, Ontario, Canada on Saturday night, retaining his title via 4th round TKO.

Holloway and Ortega put on a show in what is one of the most action packed fights of the year. But while there was plenty of action, there was little doubt who is the best featherweight in the business today. Holloway, who sat out over a year with medical issues, returned as if nothing happened and fought like he never lost a beat.

He started out slower than usual but once he found his range, he was enjoying himself inside the octagon, putting a beating on the challenger that many-including the betting gods, though would end the Blessed Era. Holloway entered the fight as defending champion, yet he closed as the betting underdog to the much hyped challenger.

Ortega had been dismantling one opponent after another, submitting them one by one. With Holloway suffering a still unknown illness that caused the postponement of their UFC 226 bout, few believed that Max Holloway would return to the old form that made him UFC champion. But Blessed put all the doubts to rest when he looked strong and sharp in the opening round of their bout. 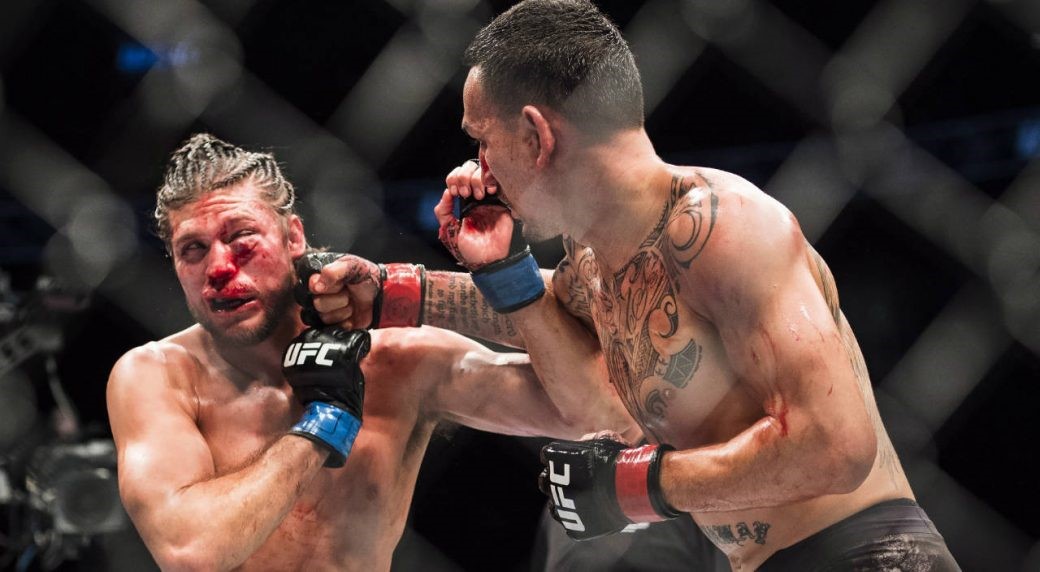 Holloway’s jab was laser-like to start the fight. He had he early success with Ortega unable to get out of the way of Holloway’s punches. While Holloway was having his way on their feet, Ortega went low and scored his first takedown. But T-City wasn’t able to do any damage as Holloway immediately got back on his feet and continued to pepper Ortega’s face with right hands and jabs.

The second round was the same as Holloway continued to pop Ortega with his jabs. But that wasn’t just it as Holloway started to get loose and he began to let his hands go and did so with relative ease. It appeared that Ortega had no answer for Max’s striking. The challenger looked desperate as he went for a pair of takedowns that Holloway easily defended. In the final minute of round 2, Holloway was throwing with even more volume and even with more accuracy. By then it started to look one-sided.

Ortega’s best round was the third as he started the round landing more significant strikes than Holloway. But by the middle of the round, Holloway got back the advantage as he began to land more punches than Ortega. Later in the round, Ortega’s left eye began to swell and his nose started to bleed profusely. Holloway looked unscathed and by the second, he looked more and more comfortable inside the octagon.

The challenger’s resilience was impressive as was his ability to take damage. But by fourth, it looked like it was only a matter of time when Holloway would hand Ortega his first loss and one big lesson. While Ortega looked hurt and was slowing down, Holloway still looked fresh and ready to go for another couple of rounds. Make no mistake, Ortega was also landing his punches but these were because Holloway allowed him to in order for them to go toe to toe. Ortega’s chin is made of steel. But Holloway was landing punches at will. The champion turned his challenger to a punching bag. By the end of the round, Ortega’s left eye was all black and blue.

Heading to their corner, it looked as if Ortega was ready to quit. The doctor went to their side and after checking the eye, decided to call a halt to the contest. Ortega was way down on points and even if he built his career on making impressive comeback wins, there was no way he was going to beat Max Holloway on Saturday night. Holloway was too superior on the feet and he had a takedown defense that frustrated Ortega. At no point in the fight did Ortega had Holloway hurt.

It was probably the best performance of Max Holloway’s career and it came at a time when people doubted him. We’ve never seen Max so sharp before but we’ve also never seen him dominate such a big fight before as well. Many gave Ortega a real chance of winning the fight. But Holloway proved not only that he is the best featherweight today but that he may be the best featherweight of all-time.

Holloway owns a pair of knockout wins over Jose Aldo, the man considered by many as the greatest featherweight champion of all-time. Holloway beat Aldo rather easily too and he did so twice, with the same ending. Since losing to Conor McGregor via decision in 2013, Holloway has won a featherweight record 13 straight time. Four of these were title fights: one against former lightweight champion Anthony Pettis, two against former featherweight king Jose Aldo and on Saturday, a masterful effort against a fighter hailed as a future champion. Sure, Ortega may have the potential of a future champion. But Max Holloway is the best featherweight today. He may be the best of all-time.

Moving Up In Weight?

Prior to the fight, UFC President Dana White talked about Holloway moving up to lightweight because he has outgrown his weight class. But not only did Holloway make weight on Friday, he looked in his best form ever. With how he beat Brian Ortega, it appears that there isn’t anyone at featherweight who can compete with Max Holloway.

"I made the weight, I made it look easy," Holloway said, referring to the weigh-in for Saturday's fight. "I'll tell you what, Dana White -- I want to be the No. 1 pound-for-pound. If there's a fight at 155, let's do it. If it's the baddest man, my good friend [UFC heavyweight champion] Daniel Cormier, bring it on. Let's go."

That may have sounded off but remember that Holloway offered to fight Khabib Nurmagomedov at UFC 223, only to be told by doctors that his weight cut would be potentially dangerous. If he only had his way, Max Holloway would have stepped up and fought Khabib. But that’s another story. For now, Holloway is the king of the featherweight division and he dared his weight class after the fight:

"I just gotta say, is there anyone else?" Holloway said. "We didn't get it in the [fourth] round, we got it at the finish. Hey, he's a tough opponent, a tough guy."

No question that Ortega was tough but he may have been too tough for his own good. Ortega was a pool of blood at the end of round three. He was barely standing up at the end of round four. But he didn’t quit well at least until the doctor said so. Had he continued, there was no doubt that Holloway would have reconfigured his face and possibly ended his career. Ortega was taking unnecessary punishment in there. After three round, his only chance of winning was submitting Holloway. However, he could not even take the champion down on the ground.

Former interim lightweight champion Tony Ferguson took to Twitter after the fight, telling Holloway “Let’s run it” if his proposed bout with Khabib Nurmagomedov would not push thru. That bout would be dope as it would pit two of the best strikers in the game today. Likewise, Ferguson has won 11 fights in a row as compared to Holloway’s 13, thereby making it a fight between fighters with the longest current winning streaks in the UFC. When UFC President Dana White heard Ferguson call out Holloway, all the boss had to say was

“I love it, I love the S*^t. Right on, Tony.”
What about it folks? And what about it in Hawaii, Dana White?