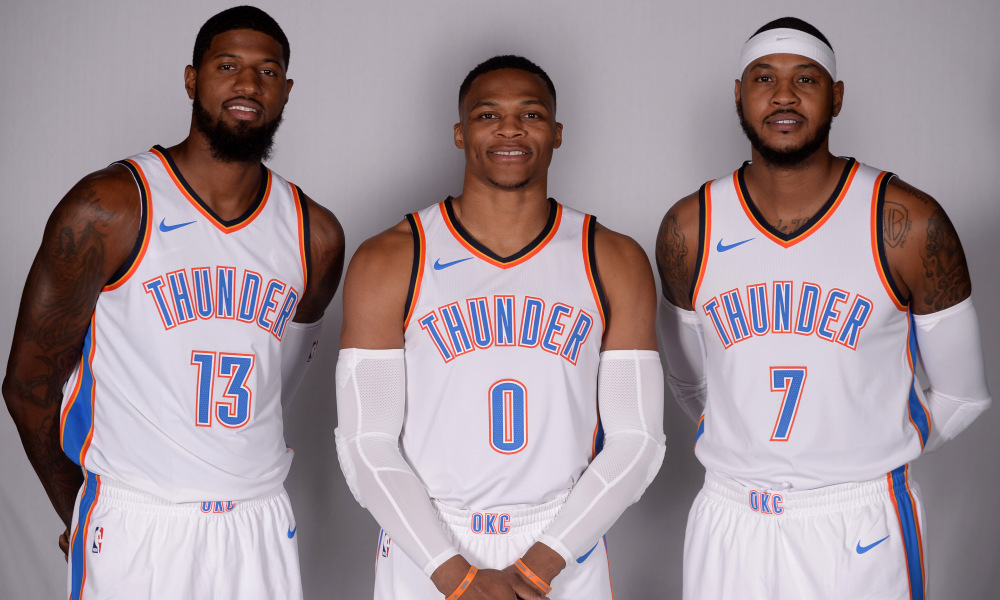 Numbers That Defined The Thunder’s Summer To Remember

It has been a summer to remember for the Oklahoma City Thunder.

They began the offseason with the hope that Russell Westbrook would sign his super max extension before the October 16 deadline. Now, they begin the pre-season not only with Westbrook locked in for the next five years but with superstars Paul George and Carmelo Anthony playing alongside Westbrook this season.

Let’s take a look back at the important numbers that defined the Thunder’s offseason. 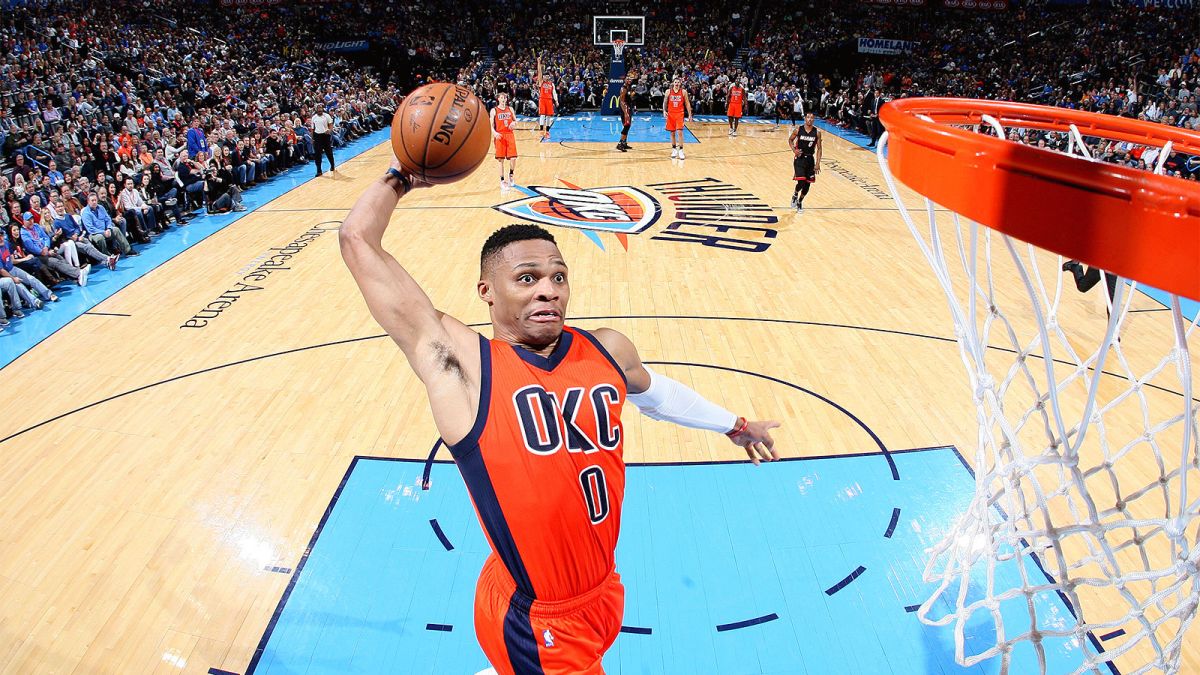 Clay Bennett paid $350M in 2006 to buy the Seattle SuperSonics and relocate them to Oklahoma City. Just over a decade later, the Thunder signed Russell Westbrook to a super max extension that will pay the 2017 NBA MVP a total of $233M for the next six years.

Westbrook signed a five year extension worth $205M, beginning with the 2018-19 season and with the 2022-23 season a player option. It is the biggest contract in NBA history based on total value. It is slightly higher than the $201M extension Stephen Curry signed earlier this summer. Counting the final year ( 2016-17 ) of his previous contract, Westbrook is owed $233M over the next six years.

The amount of $233M is more than the current career earnings of any active NBA player, except Dirk Nowitzki whose total career pay is $242M. It is more than the $203M that Joe Johnson has made throughout his entire career and more than the $201M and $200M that Carmelo Anthony and LeBron James have made, respectively. 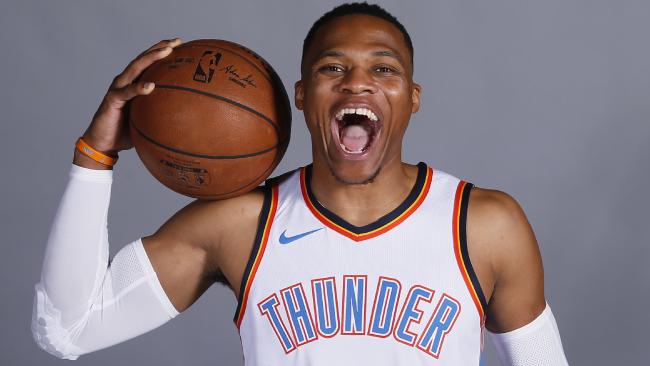 To illustrate how really massive that amount is to the Oklahoma City franchise, Clay Bennett paid $350M in 2006 to buy the Seattle SuperSonics and relocate them to Oklahoma City. Just over a decade later, the Thunder signed Russell Westbrook to a super max extension that will pay the 2017 NBA MVP 66.57% of what was paid to purchase the franchise.

If Westbrook opts in for the 2022-23 season, his super max contract will pay him an estimated of $570K for each of the regular season’s 82 games. That’s pretty huge, considering that the legendary Michael Jordan’s rookie salary during the 1984-85 season was just $550K. 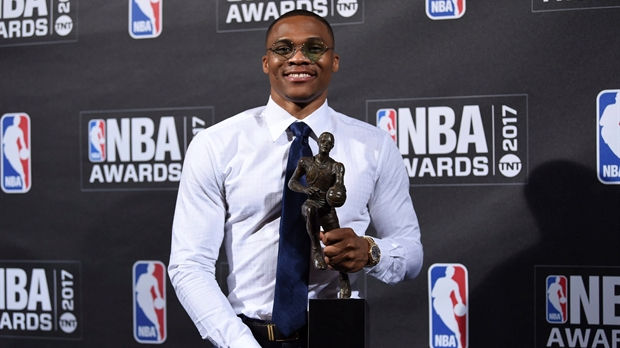 But Westbrook deserves every penny he will be earning. He is coming off a historic season. In 2016-17 Westbrook set a new NBA record with 42 triple doubles in a single season. That mark broke Oscar Robertson’s long standing standard of 41, which stood since 1962.

Many criticized Westbrook and the Thunder for padding his stats, especially his rebounding numbers. But it cannot be denied that his team played better when Westbrook had a triple double. For the record, OKC was 33-9 when Russ got a triple double and were just 14-26 ( including the 4/11/17 game against Minnesota which they won and Russ didn’t play in ) in games where he did not.

Westbrook’s historic season also translated to team success. The Thunder were given up for dead after Kevin Durant left in the summer of 2016 for the Golden State Warriors. But instead of playing dead, Westbrook’s spectacular play powered the Thunder to a 47-35 record.

Perfect Day For The Deal 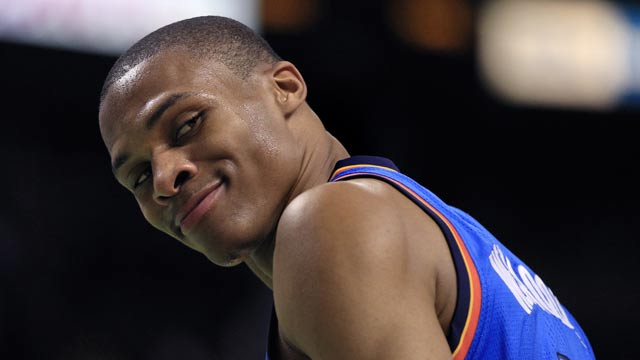 That record was good enough to become the 6th seed in the ultra tough Western Conference and 10th best overall in the entire NBA. Had the Thunder played on the other side of the fence, they would have just fallen short by two games of home court advantage in the Eastern Conference.

But the story of Westbrook didn’t end last season. It was just the beginning. Westbrook signed a three year extension worth $85M in August 2016. However, that contract allowed him to become a free agent after the 2017-18 season. With that coming up soon, the Thunder needed to get Westbrook to sign an extension.

OKC’s offer to Westbrook was on the table since July and Westbrook had until October 16 or the day before the start of the 2017-18 season to sign the deal. Many were worried because Westbrook never talked about the deal in public. In the end, he chose the perfect day to sign the deal: on Kevin Durant’s birthday. 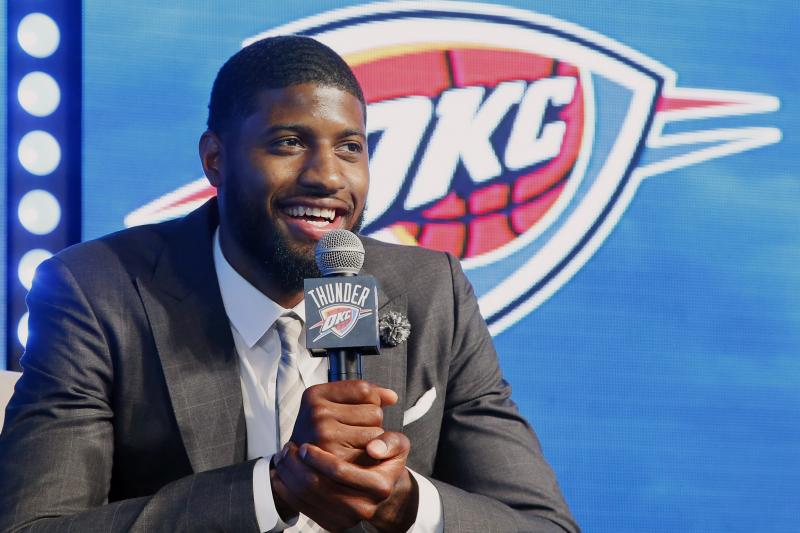 Whether that was done intentionally or was just purely a coincidence, it does add another storyline to the relationship between the two former teammates. Westbrook and Durant had a nasty split but it seemed that time had healed all wounds. Or has it, really? That’s another story though. Let’s go back to Westbrook.

So Westbrook has been re-signed. How we arrived here is yet another interesting story. The Thunder didn’t have the same assets as Boston had when this summer began but they ended up getting better than any other team in the league. OKC swung a surprise when they won the Paul George lottery. George was courted by top tier teams like the Cavs and Celtics but it was the Thunder who walked away with the prize.

In getting George, the Thunder only had to give up guard Victor Oladipo and forward Domanatas Sabonis. If that wasn’t good enough, they even saved money from that deal. Oladipo was worth $21.0M for the Thunder salary cap while Sabonis counted as $2.55M. So since Paul George’s salary was just $19.508M, the Thunder saved themselves $4.024 in cap money. 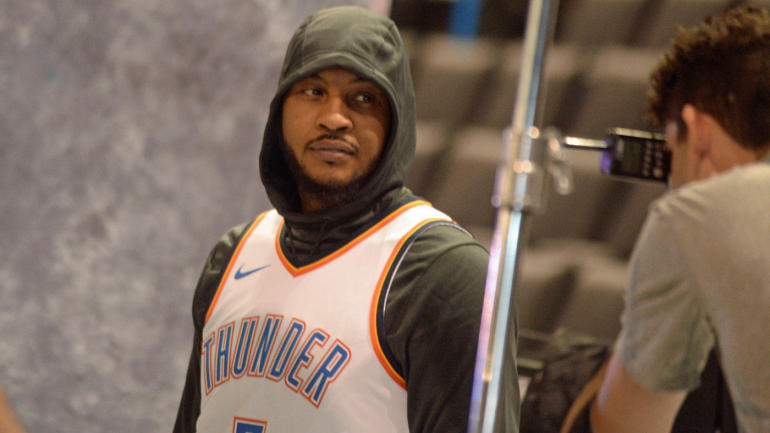 Getting George was enough to make Westbrook smile. But the Thunder did not stop there. Shortly before the start of training camp, they masterminded another deal to land the disgruntled Carmelo Anthony from the New York Knicks. That sealed the deal for Russell Westbrook.

In getting Anthony, the Thunder didn’t give up too much either. This time, they only parted with Enes Kanter and Doug McDermott. Kanter was worth $20.515 this season while McDermott was going to eat up $3.294M of OKC’s salary cap. With Carmelo Anthony counting as $26.434M this year, the difference is ‘just’ $2.434M in cap money.

So do the math here: The Thunder will spend just $2.434M in additional salary for Carmelo Anthony. You deduct that from the $4.034M savings they had from the Paul George deal. What do you get? The Thunder grabbed two high profile all-stars in George and Anthony yet they were still able to save $1.59M in cap money for the 2017-18 season. That’s incredible. 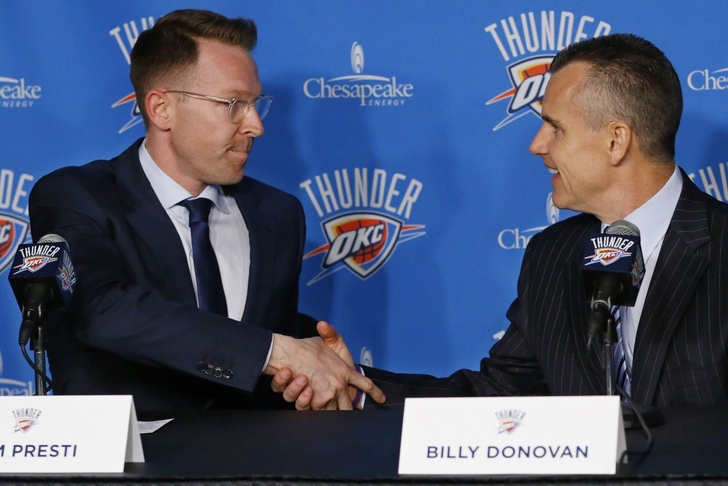 OKC was already above the luxury tax line BEFORE they got Carmelo on board. OKC’s tax bill only increased by $12.4M when Anthony was added. If you deduct the $1.59M cap savings from the PG13 and Melo trades, then the Thunder will just be spending an extra $10.81M to add Carmelo Anthony. That’s a bargain really considering Allen Crabbe will make $19M and Ian Mahinmi $16M for the Blazers and Pacers, respectively.

When it hurts though is next season. George is rumored to be leaving for L.A. next season while Anthony has a player option that he will likely pick-up because he won’t command as much in the free agent market. But if OKC has a crazy good season, both may want to stay.

Given Westbrook’s super max deal, bringing back Anthony and George next season will push the Thunder’s payroll above the $300M. We always thought the Warriors would be the first $300M team in NBA history. We could very well be wrong. 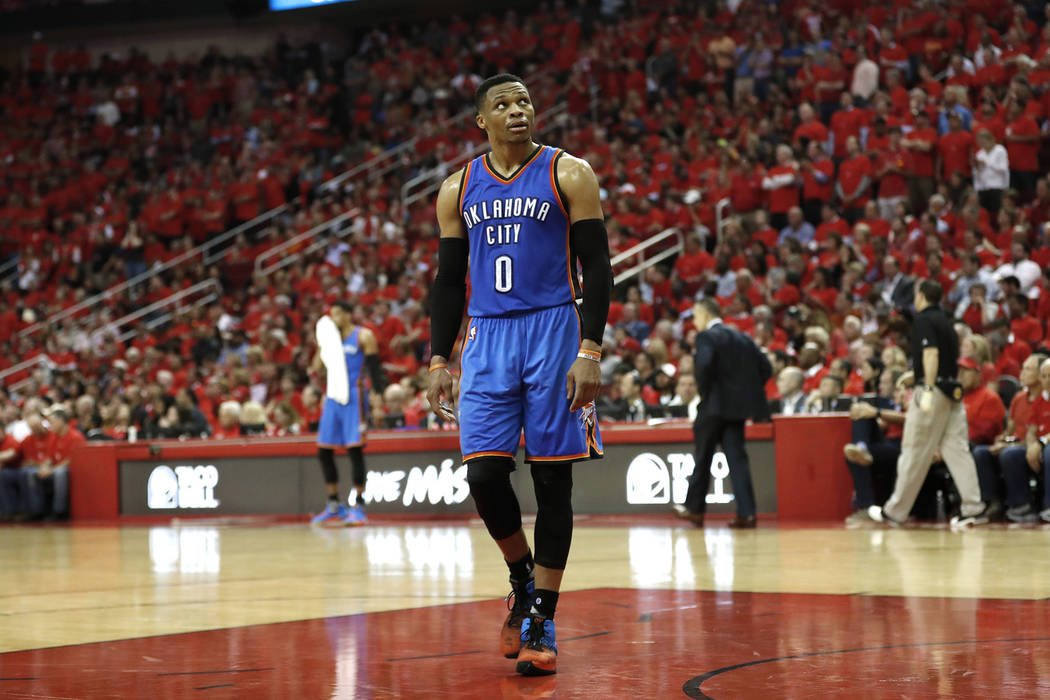 Championships no longer come cheap. The Warriors and the Cavaliers are the current proof of that. These two teams have played in the last three NBA Finals. They did that by building super teams at hefty prices. They are paying huge luxury taxes to remain super.

The Thunder aren’t a big market team like the Lakers or the Knicks and as such, paying a hefty sum of luxury tax won’t be prudent. But if their goal is to chase the title and if they have the money to do so, then why not pay the price.

The thing is, OKC isn’t looking beyond the current season. Their main goal was to have Westbrook sign his super max extension. To do that, they had to give him the best teammates possible to succeed. They passed that test and with flying colors. 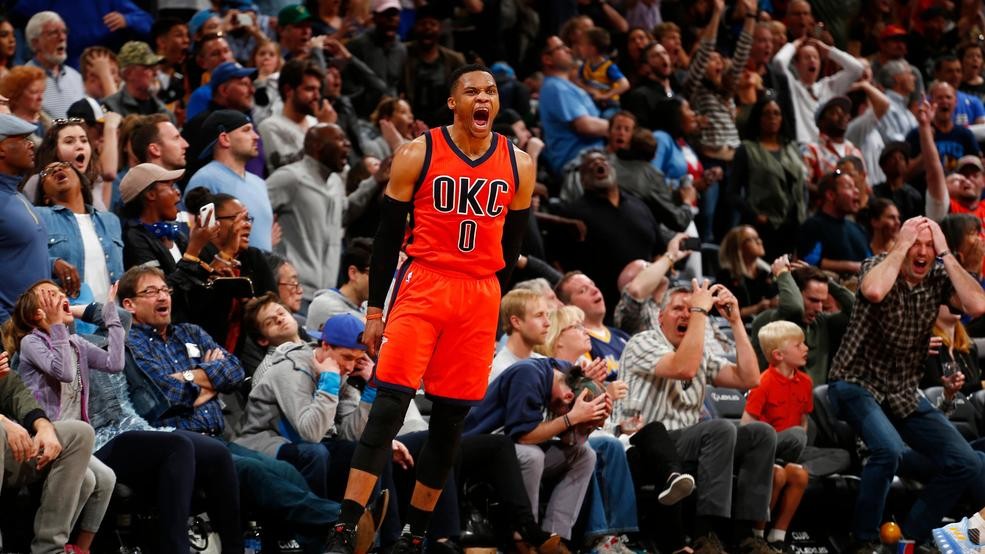 Whether this Thunder Super team will be successful or not is another story though. Getting three superstars to be on the same page won’t be an easy task. The Thunder have three ball dominant stars. Having them share the wealth is an interesting task. But one or two must have to give in for this marriage to work out.

Should this experiment not work out, then Paul George could easily revert to his original plan of going to the Lakers. Anthony is expected to exercise his player option but who knows what his plan is. At the end of this season, failure could get this team back to square one.

But even then, what’s important for the Thunder is that Westbrook is locked at least for the next five years. So even if Paul George and/or Carmelo Anthony leave at the end of the upcoming season, the Thunder will have a back-up plan. 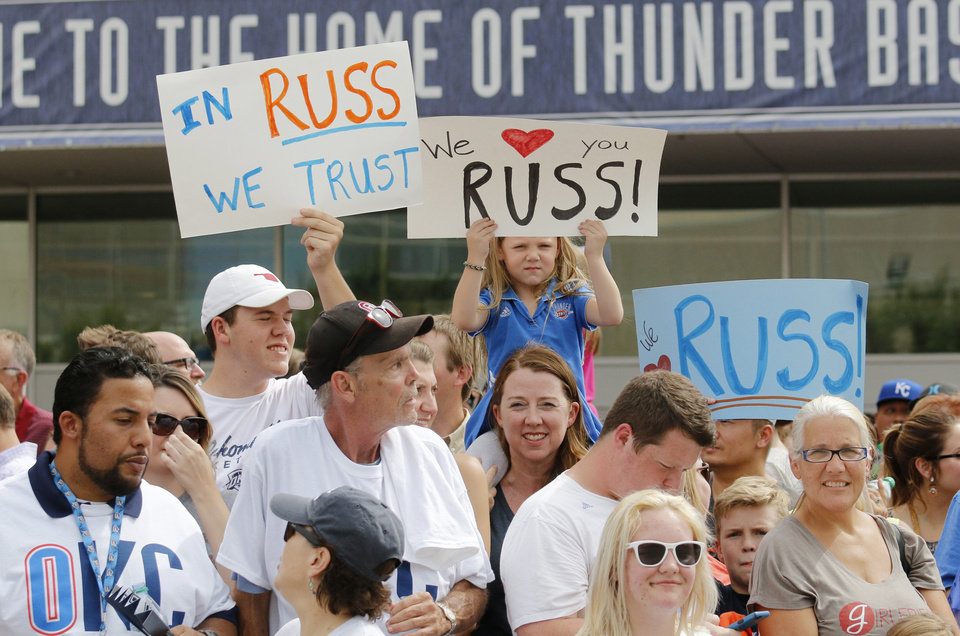 That fallback is to unleash Russell Westbrook against the world again. They did that last season and they were successful. They can always fall back to that now that Westbrook has been fully secured. If Melo and PG leave, the Thunder will have the financial flexibility to rebuild around Westbrook again.

Just one season ago, the Oklahoma City Thunder were mourning the loss of Kevin Durant. Now they’ve built a team that may be good enough to topple Durant’s current team. That’s just awesome. What GM Sam Presti has done in the last three months isn’t just unprecedented, it’s a stroke of genius.