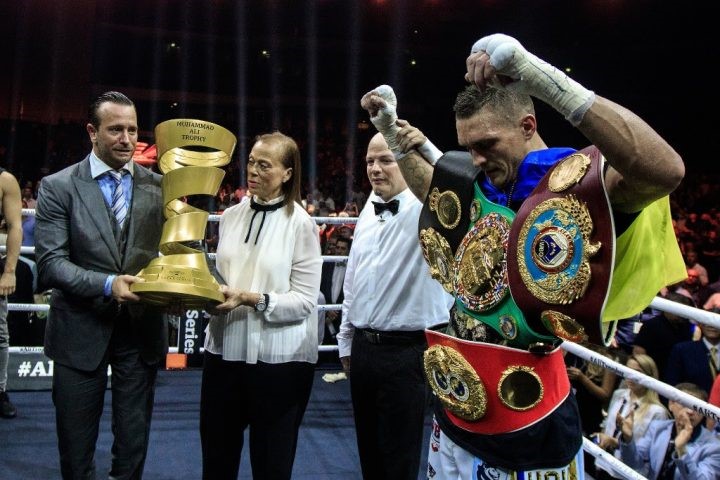 When the World Boxing Super Series was organized, the vision to produce exciting fights as well as crown an undisputed world champion. The latter won’t be happening when George Groves meets Callum Smith for the finale of the super middleweight tournament although the battle between the two Brits promises to be an exciting affair. 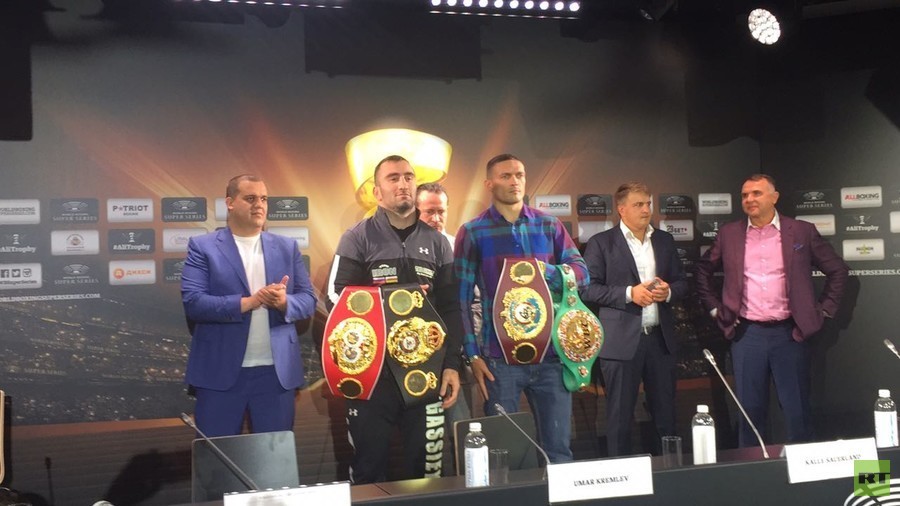 But for the tournament at cruiserweight, the stars fell into place. On one side of the bracket, top seeded Oleksandr Usyk brought with him his WBO belt and unified it with the WBC belt, defeating then champion Mairis Briedis in the semi-finals. On the other side, IBF cruiserweight champion Murat Gassiev unified two belts by annexing the WBA (unified) title with a win over Yunier Dorticos in their semifinal encounter. And so the stage was set for two unified champions to fight for the right to be called the undisputed cruiserweight boxing champion of the world.

The cruiserweight tournament championship was highly anticipated. It was supposed to go down last May 11, 2018 in Jeddah, Kingdom of Saudi Arabia. But the original schedule was scrapped after Usyk suffered a left elbow injury in his training camp. Luckily, the injury was considered as minor and the bout was re-booked two months later but at a different venue.

Last month, the organizers announced that the venue had been moved to Russia and the fight would be held at the Olimpiysky Sports Complex in Moscow. That move gave Gassiev the perceived advantage of fighting in front of his countrymen. But it didn’t affect Usyk, who has been boxing’s ultimate road warrior during his title run. 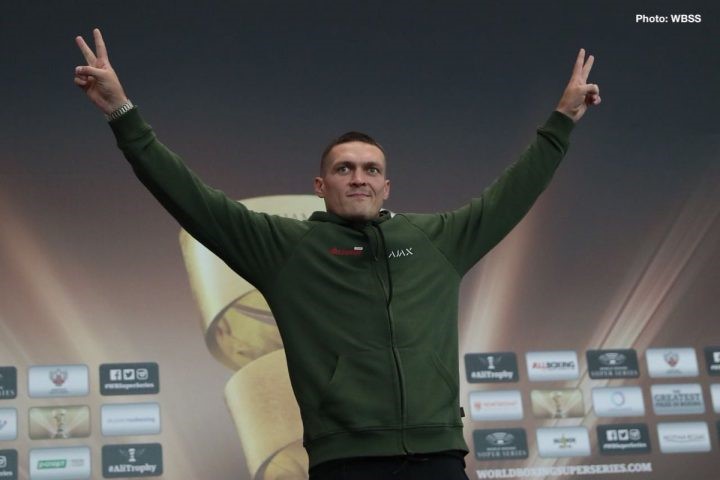 Usyk won his WBO belt by defeating Krzysztof Głowacki in the latter’s home country in Gdansk, Poland. His first two title defenses were held in the United States while his third consecutive title defense was in Marco Huck’s adopted country in Germany. Then in the semifinals of the World Boxing Super Series cruiserweight tournament, Usyk traveled to Mairis Briedis’ hometown of Riga, Latvia to add the WBC title to his resume.

For his part, Gassiev won his IBF title in his native Russia, beating compatriot Denis Lebedev via split decision. Gassiev defeated Krzysztof Głowacki in the tournament quarterfinals in the United States and then unified his belt with the WBA championship in Sochi, Russia. But while his two biggest career victories happened in Russia, Gassiev didn’t think it was a big deal, except that his mother and brother would get the chance to watch him in his biggest fight to date.

And so on Saturday night, the world stood still as the top two cruiserweights in the world battled for the tournament prize- the first ever Ali Trophy and of course a place in history as undisputed world boxing champion. Two unbeaten champions, two knockout artists, the top two fighters in the division. It had all the recipe for a blockbuster. But like many high profile fights before it, there was a possibility that it would bomb out.

To their credit, Usyk and Gassiev fought strategically. Everyone expected Usyk to neutralize Gassiev’s punching power by using his laser right hand jab and he did. Gassiev, the feared body puncher, tried his darn best to target Usyk’s midsection. Gassiev had some success but he could not slow down Usyk who only got busier and stronger as the fight went on.

Not A Pretty Fight 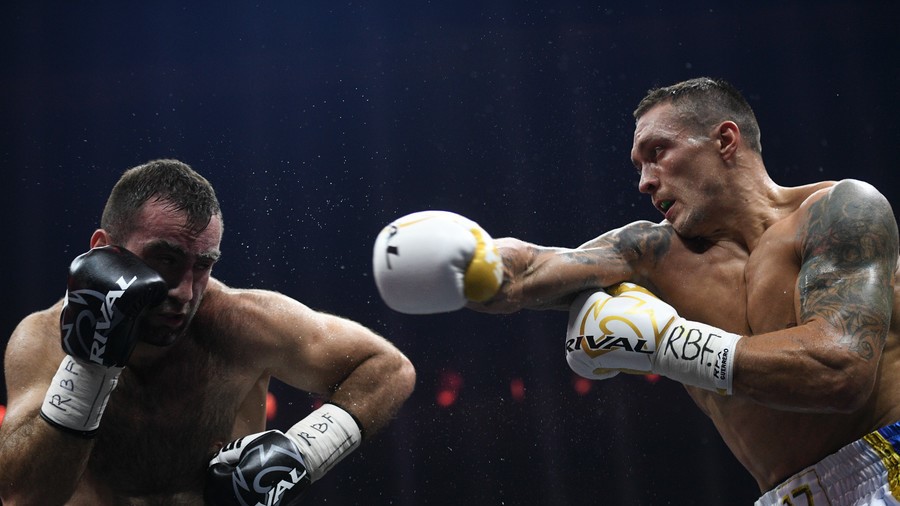 There were no knockdowns in this one, and not surprisingly. Sure, Usyk and Gassiev entered the fight with a combined record of 40-0 with 30 knockouts between them. But when you have two heavy hitters like these, sometimes they end up being too worried about the other’s punching power that they get too cautious. It was a couple of weeks ago when we watched the UFC’s Francis Ngannou and Derrick Lewis turn what was supposed to be a barnburner into a snoozefest.

The 31 year old Ukrainian connected a total of 252 out of 931 punches ( 27%) including 99 out of 519 jabs. On the other hand, the 24 year old Russian landed just 91 out of 313 punches (29%) and just 9 out of 74 jabs according to Compubox statistics. It wasn’t pretty, not at all. But it was enough for Oleksandr Usyk to become undisputed cruiserweight champion and take home the Ali Trophy.

It was Muhammad Ali’s widow Lonnie Ali, who presented Usyk with the trophy inside the ring after the fight. It was but fitting for Usyk to take home the Ali Trophy because he shared the same birthday, January 17 as The Greatest. After the fight, Usyk revealed that his wife already had prepared a special place for the Ali hardware in their home. Talk about confidence.

But Usyk backed up his confidence with a supreme boxing skillset. The former 2012 Olympic boxing heavyweight gold medalist used his superior movement and hand speed against the plodding Gassiev. Gassiev was able to land some of his big bombs but for most of the fight, hid offense was sporadic and he often looked lost in the ring.

As the fight went on, Gassiev was reduced to a big puncher trying to look for a Hail Mary. But even if he landed clean on Usyk, the latter had a solid chin to back up his superior technique. Usyk set the distance and simply circled around Gassiev, throwing more punches and landing the cleaner blows.

In the end, it wasn’t even close. The three judges had not trouble in awarding Oleksandr Usyk with the unanimous decision victory with scores of 120-108, 119-109 and 119-109. Usyk gave Gassiev a neat boxing lesson he won’t forget in a long time, but one that should make the younger Russian a better fighter in the future.

Although Gassiev pushed Usyk in one of their pre-fight staredowns, there was plenty of respect between the combatants. That was probably because their trainers, Russ Anber for Usyk and Abel Sanchez for Gassiev are known to be long time buddies. The respect remained after the fight as Gassiev was gracious in defeat:

"Best opponent in my professional career. Oleksandr Usyk did a great job. Thank you for this fight," Gassiev said. "Oleksandr was the favorite, and he proved it. This was very good experience for me. Some fighters have good nights, some have good punch, good defense, and you never know what will happen.”

As for Usyk, he wasted no time in calling out British boxer Tony Bellew who is a former WBC cruiserweight champion. Said Usyk after the fight:

"We need to take a rest after this difficult fight, and after that we will sit with my team and make a decision," Usyk said. "I heard Tony Bellew is looking for a fight with the winner of the Muhammad Ali Trophy. I hope he will see me. Tony Bellew are you ready?" 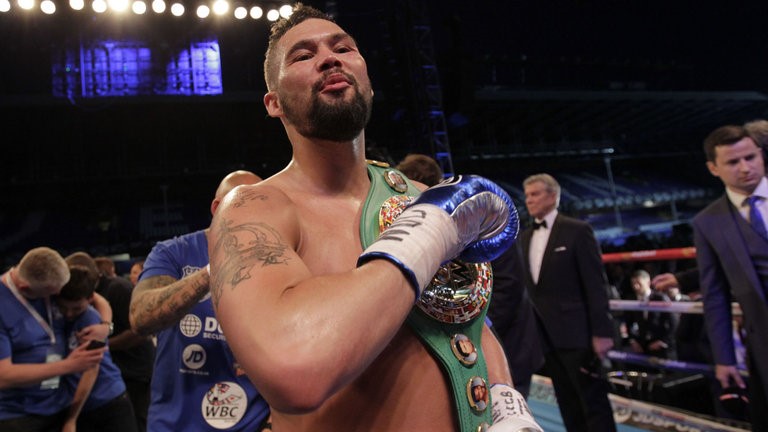 Bellew has been campaigning as a heavyweight recently and is coming off back to back wins over fellow Brit and former heavyweight champion David Haye. But Bellew recently said that he would love to fight the winner of the World Boxing Super Series cruiserweight tournament. When asked about Bellew and which weight class he wishes to fight the Briton, Usyk said:

"If he doesn't want to go down, I will go will go up for him," Usyk said. "I will take extra spaghetti for dinner."

Bellew stands as the most lucrative fight for Usyk. The cruiserweight division in boxing is one of its most talented but also one of its most overlooked weight class. Much focus on the sport has been in the welterweight division where the likes of PPV superstars like Floyd Mayweather Jr. and Manny Pacquiao used to reside at.
In recent years, the heavyweight division has seen a rise in popularity owing to the arrival of popular heavyweight champions Anthony Joshua and Deontay Wilder. Middleweight Saul “Canelo” Alvarez is considered the heir to Mayweather’s PPV throne. Canelo is due to fight Gennady Golovkin in a highly anticipate rematch soon. Even the likes of Terence Crawford, Errol Spence Jr. and Keith Thurman are more popular than Usyk.

When you talk about skills, Oleksandr Usyk is probably one of the most skilled fighters in the game today. However, he doesn’t possess the star qualities that the likes of Joshua and Terence Crawford. Hopefully, his victory over Gassiev gives him a good introduction to boxing fans. And hopefully, a fight with Tony Bellew in the UK opens the door for more opportunities for boxing’s latest undisputed champion.