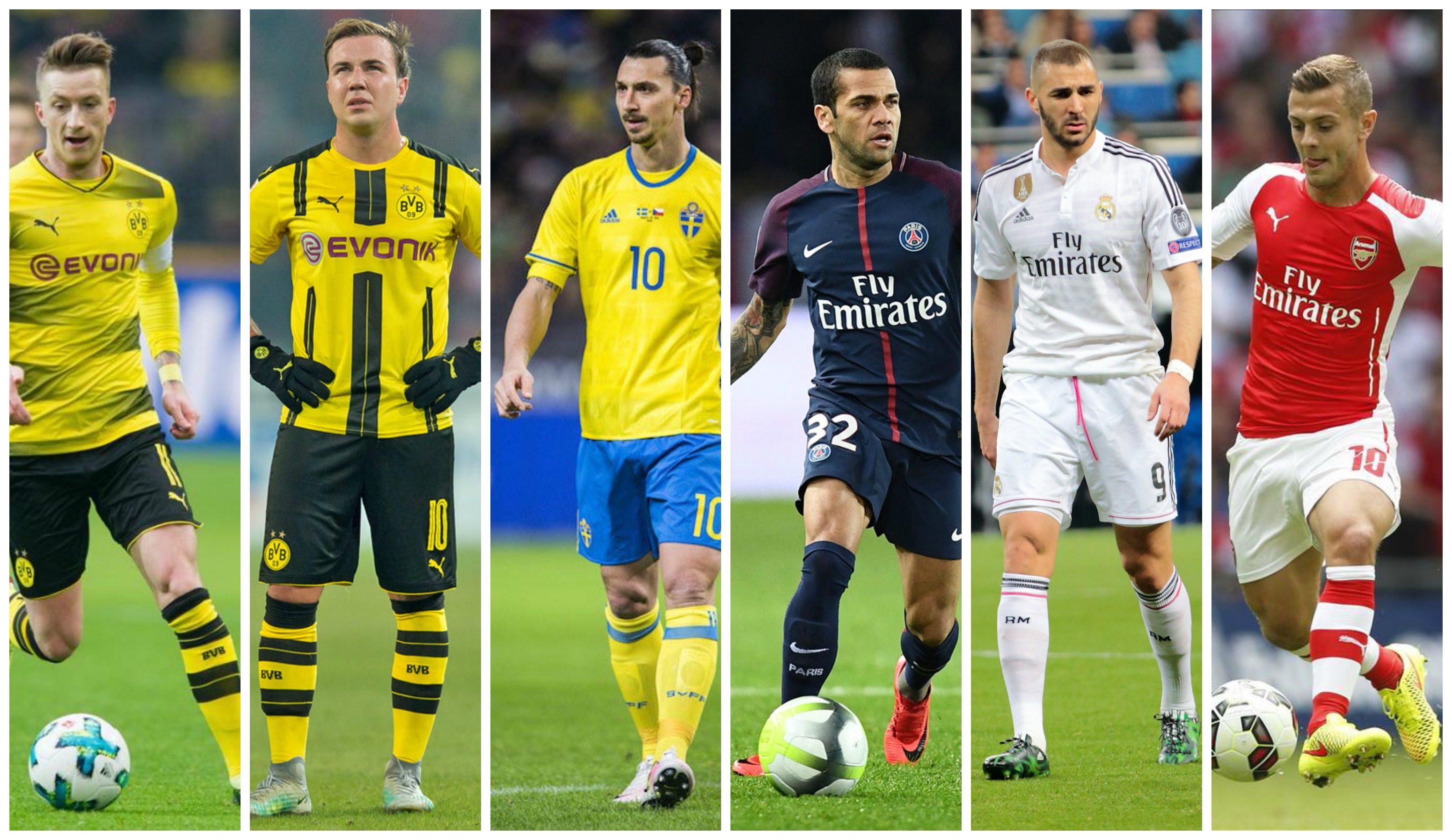 The FIFA World Cup is the world's biggest football competition, and playing in it are the best players from across the globe. It would only be fitting to let the most skilled and talented footballers play in the grandest football arena.

But what would you do if the worthy players are unable to play due to a variety of reasons? Well, there’s nothing you can do.

So, who are these talented but unfortunate souls that will miss this once-in-every-four-year event?

Jack Wilshere, Arsene Wenger’s go-to midfielder, had a spectacular run this season. Having went full-blast all-season long, Wilshere is surely worthy to be included in England’s 23-man squad for the upcoming World Cup.

He’s already proven that he’s got what it takes as he had gained a spot in the main eleven during Arsenal’s campaign at the Champions League. Unfortunately, his huge achievements this season seems not enough for him to make it to the English squad in Kiev this summer.

Wilshere had all the opportunities to shine, and he undoubtedly made the most out of every possession. After all, he was given lots of playing time. Unfortunately, he wasn’t the best when it comes to consistency.

Some even blamed him on why Arsenal slipped off the top five in the Premier League. The season ender was indeed devastating for him. His dribbling and through balls have been great, but his finishing and tackling skills need improvement.

Mesut Ozil can’t even smoothly implement his plays because of Wilshere’s lopsided defense. Good thing that Laurent Koscielny and Shkodran Mustafi got his backs. But still, his mates' help wasn't enough to carry him until the season ended.

Nonetheless, he proved that he could be a formidable attacking force, and that's what makes Gareth Southgate think twice whether he would let him in the 23-man English squad. He's also a key asset to the team after making 34 appearances for England.

Some even consider him as the most creative English midfielder, but his share of failures in Arsenal’s campaign had imprinted a negative mark on him for the World Cup.

German forward Marco Reus is another one who’s expected to miss Russia. For those who haven’t heard of him, he’s known to have experienced one of the worst timed injuries in football after sustaining a knee ligament injury during Germany’s triumph at the 2014 World Cup.

Though he has remained fit all-season long, the caliber of his performances had been not so pleasing. Reus was the sure pick for the Rio World Cup, but the times have changed, and this time, it’s likely that he’ll be left out.

Firstly, four years is a long enough time to produce new talents. And that’s what happened in the German squad. Talented youngsters who are full of potential have made it to the headlines. The competition had become stiffer, and the odds of him making it to the final roster had decreased.

Reus’ style of play doesn’t also complement Joachim Low’s game plans because the 28-year-old prefers counter attacks and layoffs, which is a bit too aggressive for Low’s more conservative strategies.

As of now, Reus is part of the 27-man provisional squad, but we still have to wait and see if he makes it to the 23-man squad which will be sent to Kiev this summer. He’s made nine goals out of his 17 game appearances this season — not so good considering that he contributed zero assists to Borussia Dortmund.

Then there’s the Frenchman Karim Benzema who’s still waiting for any news about his fate in this year’s World Cup. The 30-year-old striker had been out of the French national team since his involvement in a scandal with Mathieu Valbuena.

It’s also been a long time since he last played for the French team. He was even out of Euro 2016 — another good reason why he might already be rusted when it comes to playing international football.

He’s also had a pretty bad season with Real Madrid after making only ten goals out of his 43 game appearances.

Though he contributed 11 assists to Zinedine Zidane's side, he still falls short of wit and agility as his age is slowly taking a toll on him. His ball handling and passing are on-point. Unfortunately, that's not what Didier Deschamps needs.

For sure, his on and off-field issues with the team plays a huge role in his status in the World Cup. If he wants to play, then he should do his best to fix it as soon as possible. But based on the looks of it, he's already too late.

Dani Alves, Paris Saint-Germain’s elite defender, had been through a lot this season. The apex of challenging season — his knee injury which will put him out of the World Cup due to the required six-month recovery period.

Their victory over Les Herbiers last Tuesday wasn’t a bed of roses as he limped off the season-ender. Rodrigo Lasmar, the Brazilian’s doctor, quickly Flew to Paris to examine Alves’s situation.

He then diagnosed the 35-year-old to have a serious injury on his right anterior cruciate ligament, which needs immediate surgery. Lasmar then said in a statement that the right-back would surely miss the World Cup due to his condition.

This is surely a big loss on his side as he would miss the opportunity of going head-to-head with the best football players in the world. Brazil will face Croatia on June 3 and Austria on June 10 for a series of warm-up matches before their World Cup starter with Switzerland on June 17.

This year’s World Cup was supposed to be his opportunity to further solidify his grasp on power as Brazil is placed in Group E, which, frankly speaking, doesn’t hold a lot of power.

Alves, who’s already 35-years-old, might be aging, but he’s doing pretty great before the unfortunate incident happened. His crossing, ball handling, and passing skills are on par with Mohamed Salah, Harry Kane, and even Neymar.

He also likes to tackle and commit fouls often, which, unfortunately, isn't what Tite prefers. So, with this alone, one can see that Alves' chances of playing in Kiev are already very minimal.

Football legend Pele knows how Alves feel because he also went through the same situation when he was forced out of the World Cup two times.

Danilo of Manchester City and Fagner of Corinthians are expected to replace Alves once the 23-man squad of the Brazilian national team is finalized next week.

Mario Gotze is another injury victim after breaking his foot last September. This made him miss the 23-man final squad cut. Nonetheless, he hangs by a thread as he made it in Germany’s provisional squad.

He’s also been out of action since last year, which might be another reason why he isn’t fit to play for the German team in Kiev. Despite this, it was reported that manager Joachim Low extended his contract until 2022, which means that he still got a chance to prove his worth to the team.

Nonetheless, it’s worth noting that he’s a great ball handler and passer — things which might land him a spot in the national team. But then again, that’s highly unlikely to happen as he’s lack of tackling skills makes him an unfit match for the team.

Gotze is already 25-years-old, and it seems like he still hasn't improved despite the many games he'd been through. Gotze only made three goals out of the 38 game appearances he had this season.

Zlatan Ibrahimovic was once Sweden’s best football player. However, his age had been slowing him down. His strikes are becoming more inaccurate, his tackles are now clunkier, and he’s been committing fouls more often — not good for a member of Sweden’s 23-man squad.

Ibrahimovic was initially hopeful on playing for Sweden, but unfortunately, his hopes were crushed when Sweden confirmed last Tuesday that he wasn’t part of the squad.

Janne Andersson’s snub on the forward isn’t an ordinary one as it also signaled the end of his international career. This is a huge disappointment for Ibrahimovic because he teased his fans about his potential comeback ever since Sweden qualified for the World Cup last November.

He even spoke about his “inevitable” return on a number of occasions ever since Sweden became eligible for the World Cup.

Take for example the LA Galaxy press conference last March when he said that Sweden kept calling him every day asking him to join the squad. The forward even said that if he wants to play, then he will play — proof of his over confidence.

Then there's another occasion where he said that a World Cup without him wouldn't be considered as a World Cup. It seemed like he was going to make it to the final roster, but unfortunately, it wasn't the case.

Most sports analysts believe that Janne Andersson’s reason on the snub was due to Ibrahimovic’s less than stellar performance this season. His shift to Major League Soccer indeed dented his legacy as the American professional football league was considered as an inferior contest compared to the English Premier League.

Defenders Ashley Cole and Rolf Feltscher are also having a hard time making up for Ibrahimovic’s inconsistent offense, the reason why their performance in the field wanes from time to time. His connection with Giovani dos Santos and Ola Kamara isn’t also the smoothest, even if they need to be synchronous with each other in the field.

LA Galaxy is at the 9th spot of the Major League Soccer standings, which is another sign that Ibrahimovic needs to keep up with the massive expectations on his shoulders. They still have a long way to go in the league, and they need to overtake the football giants in the U.S. — a feat which is impossible to accomplish with Ibrahimovic’s leadership.

Then there’s his age, which most believe is the main cause why his pace has significantly slowed down. With this being said, it’s clear to say that Zlatan’s prime is already through. Now is the time for him to slowly wind down his career and make sure that he finishes his career with style.

For sure he can make it. He just needs to calm down and not force things up like playing in the World Cup which is currently dominated by talented youngsters. His glory days are over, and now is the time for him to strategize his slow but still glorifying career lie low.

Onto the World Cup

As of now, Brazil leads the odds ranking to win this year’s title. They’re followed by Germany, the previous champions. Spain takes the third spot and France with the fourth. Lionel Messi’s Argentina is then at the fifth spot.

The FIFA World Cup is no place for the weak in body in mind. It’s where the best football players play. Unfortunately for the guys mentioned above, it’s pretty clear that their time is not now. Perhaps they’ll shine in the next years, or probably not.

What they have to do, though, is to do their best to improve and make sure that they stay healthy at all times.