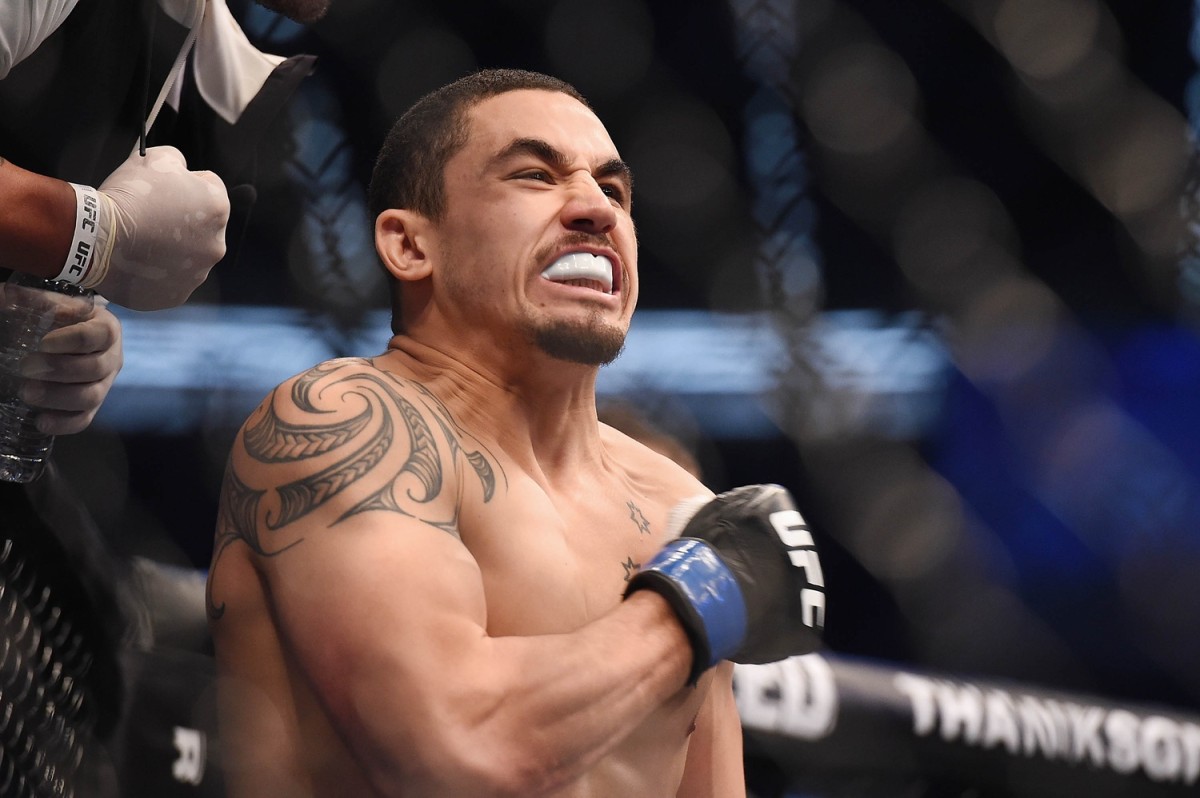 Australia is on a winning streak. Two weeks removed from Jeff Horn’s upset victory over Manny Pacquiao in the sport of boxing, Robert Whittaker made history The Reaper defeated Yoel Romero at the main event of UFC 213 to become the UFC’s interim middleweight title. There were no controversies here however, unlike Horn’s win over the Pacman. Like that fight, this was a closely fought contest. But there was no doubt who won.

But it wasn’t easy. Whittaker bucked a leg injury in round 1 to outlast the tough Cuban in five rounds.

“It definitely was impacting my game,” Whittaker said of the injury. “I was trying to establish the jab. It was pretty bad, but champions are made of this stuff.”

After twenty five minutes of war, all three judges scored the bout 48-47 in favor of Whittaker who became the first Australian or New Zealander to win a UFC title. The victory was sweet but the journey much sweeter.

Born in New Zealand and raised in Australia, Robert Whittaker is the new breed mixed martial artist. He’s not a wrestler who learned how to strike or a boxer who was taught to wrestle. He is a combination of several disciplines molded into one vicious fighting machine.

At age 7, he started training in karate before transitioning to hapkido under coach Henry Perez at the PMA Mixed Martial Arts Academy in suburban Sydney. Then after earning black belts in both karate and hapkido, Whittaker took up Brazilian Jiu Jitsu. In May 2017, he earned his brown belt from the Gracie Jiu Jitsu Smeaton Grange in Australia.

Whittaker got his ticket to the UFC by winning welterweight tournament of The Ultimate Fighter: Smashes in 2012. His quarterfinal victory was named as knockout of the season. Then his unanimous decision victory over Brad Scott in the finals won him a UFC contract, five days before he turned 22 and four years after he began his MMA career.

"I started for fun, I got the fever, and here I am today. I'm going to enjoy every step of it. Where it leads me is up to fate. I think there are going to be big things.
Big things did not come easy for the Australian. After winning his first two bouts under the UFC banner, Whitaker lost back to back fights to Court McGee and Stephen Thompson. With things going south, he had a heart to heart talk with coach Fabio Itte.

The talk ignited a sensational run which began with Whittaker winning his next fight in New Zealand and moving up to middleweight after that. His middleweight debut, a knockout of Clint Hester was named as Fight of The Night. In his second middleweight bout, he knocked out Brad Tavares and was awarded with Performance of the Night. He has not looked back ever since.

"I'm doing my own journey. I'm increasing my skill sets. I'm surrounding myself with good people, and I'm enjoying the journey. I'm just scratching the surface of what I can be and what I can accomplish."

What makes his middleweight run even more sensational is how he’s defied the odds. At age 26, he is at least six years younger than anybody in the middleweight division’s Top 10. Consequently, he has the least experience inside the Octagon. In all but one of his middleweight bouts, the Reaper was the betting underdog. Whittaker also gave up reach in each of his first five bouts at 185 pounds. From Uriah Hall, Derek Brunson and then Jacare Souza, every fight was called the biggest of his career. And then at UFC 213, Whittaker took his six fight winning streak against the only fighter who had a longer winning streak than him- Yoel Romero.

Fight of a Lifetime

A freak of nature, Romero is a decorated wrestler. The 40 year old Cuban won a gold medal in the 1999 World Championships and a silver medal at the 2000 Olympics. Since joining the UFC, Romero has not tasted defeat and has stopped six of eight UFC opponents. His UFC resume is nothing short of impressive: Derek Brunson, Brad Tavares, Tim Kennedy, Lyoto Machida, Jacare Souza and Chris Weidman. Known as the ‘Soldier of God’, Romero is the UFC’s #1 ranked middleweight contender. But with the champion Michael Bisping out with an injury, Romero was booked Robert Whittaker to an interim title bout at UFC 213. For Whittaker, it was the fight of a lifetime.

No fighter from either Australia or New Zealand had ever won a world title in the world’s premier mixed martial arts promotion. Mark Hunt was the only other Kiwi to get a UFC title shot but the Super Samoan lost to Fabricio Werdum by knockout at UFC 180. On the other hand, Elvis Sionsic was the only other Australian to ever challenge for a UFC belt. Sionsic was knocked out by Tito Ortiz at UFC 32. Once again Robert Whittaker defied the odds.