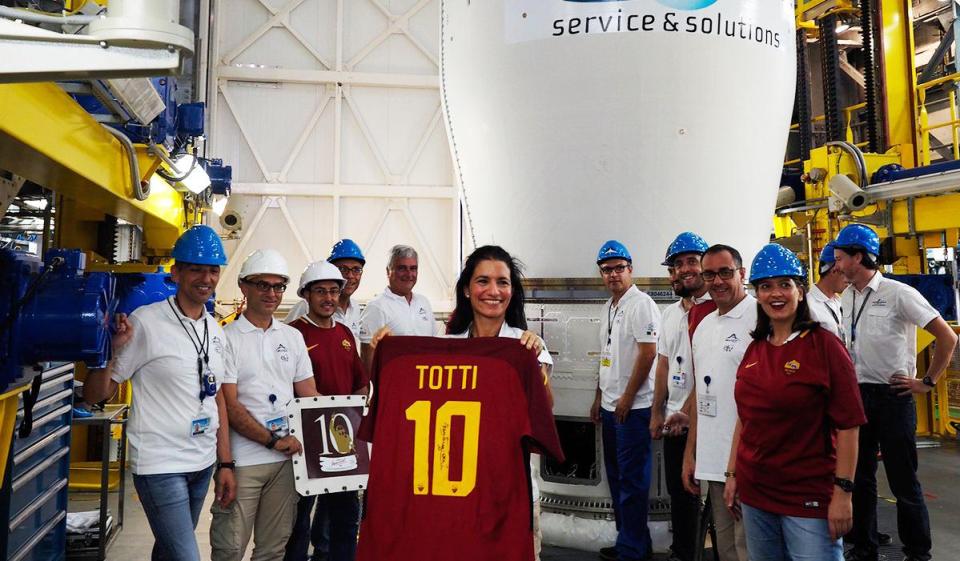 If you google Francesco Totti, or even take a quick peek at his Wikipedia page, take a look at the clubs that he has played for and only one name will apply: AS Roma.

It’s no wonder that the club went out of their way to honor him in ridiculous style by sending a Totti T-shirt into space! Yes, you heard that correctly. After officially announcing his retirement from the club last season, AS Roma approached Avio, an international rocket design company to launch his t-shirt into space.
The t-shirt has a special significance around it, as it was a replica of Totti’s 786th t-shirt which he wore in his final appearance for AS Roma. The club’s official website said they did it to honor the commitment and loyalty of Totti – who also gave his nod of approval for this act of gratitude.

It’s one of the first time’s that a football player’s t-shirt is sent into space. Perhaps it’s unfair to call Totti just a ‘football player’. Because to his fans, the club, and Italy he means so much more. He is a symbol of loyalty, grace and often dubbed as the ‘golden boy’ of Rome. A national hero of epic proportions, Totti embodied the game of football in every way that it should be.

To put it into perspective, there are places and shops named after Totti. In Italy, there is even a Square named after Totti called “Piazza Francesco Totti”. Ask anyone in the streets of Italy about Totti, and even opposition of him would speak only the most highest of this legend of a player.

After a lifetime with the club, (24 years to be precise), Totti admits to finding it hard to leave the club. Before his final game against Genoa, in which the team won 3-2, Totti said to the fans that he is ‘scared of leaving football’ and that he needs the support of the fans. It’s not a surprise. All Totti did in his life was football, passing, scoring and defending since he was a kid. Getting out of this way of life must not only be strange but extremely hard to adjust to a ‘normal’ way of life.

It’s also the pedestal that the great Totti is on that will make his transition out of football interesting. He is seen as a role model, a King and a general amongst his people. He lives a life that is sort of flawless on the surface level; marrying his long-time girlfriend with three children.
Totti joined AS Roma when he was 13. Today he is 40. If that does not put it into contrast, then I am not sure what does. He is an example both on and off the pitch. In his final game, he was applauded by teary-eyed fans in the stands. Football fans across the globe tuned in to watch his final game. The eyes of the world were fixated at the mercurialness of Totti after all these years.

Besides that, he also won a world cup with Italy and played the second most Serie A games ever. Totti, oh Francesco Totti. Leaving the world of football is one of contrasts. On one hand football fans are sad that they no longer get to see his talents displayed on the field. On the other hand, we all know it is time. All greats leave the game eventually.
The launching of Totti’s t-shirt from French Guyana is symbolic. It recognizes the once in a lifetime football player that Totti is. The ‘out-of-this’ world football style he showed the world. Totti’s t-shirt launched into space to preserve it for eternity, and his talent will remain on the game of football forever.