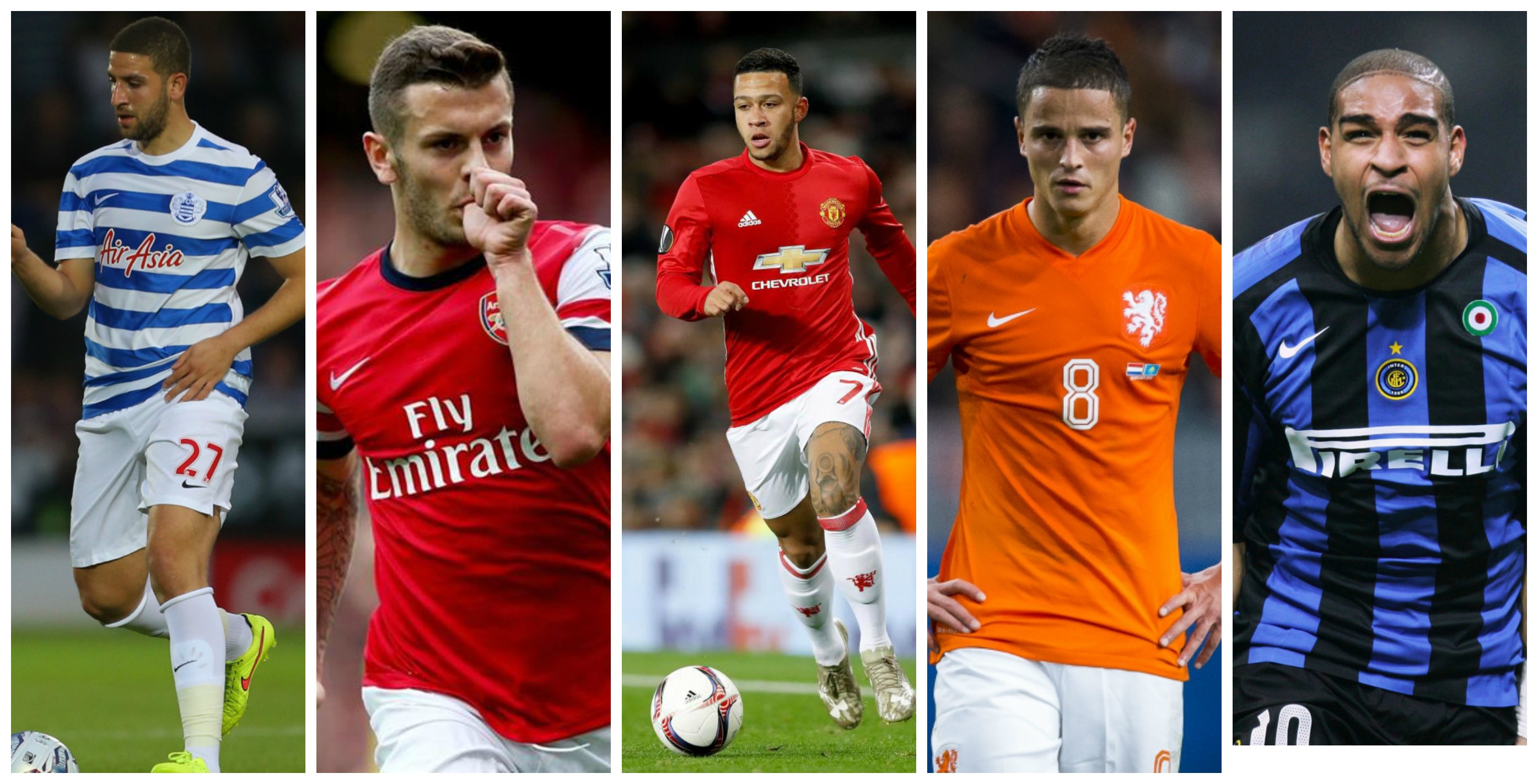 13 September 2008 – A young Jack Wilshere at only 16 years of age and 256 days makes his debut for Arsenal and breaks’ the record for the club’s youngest debutant. He lit the English Premier League up in his first few seasons with some deft touches, and sublime passing with his teammates around him and became dubbed the next ‘big thing’ in football. Fast forward to the summer of 2017, and Wilshere is recovering from injury, far from his manager’s starting XI and attracting transfers from Sampordia and Turkish club Antalyaspor.
It’s the unfortunate tale of many young talented footballers. They are often debuted at a very young age and over-hyped by the media. Consequently, they fall terribly short of all the hyped potential and it is excruciating to watch. In light of the recent spotlight on Jack Wilshere, we take a look at similar stories of footballers and where they are now:

Good ole Adriano. A genius with the football at his feet. Dubbed as the next “Ronaldo”, due to his lightning quick feet and keen eye for the goal. He was that brilliant that he even debuted for the Brazil’s National Team at age 18. He even on to win the Copa America with Brazil (Where he won the Golden boot!). Adriano signed for Inter where he even got the nickname “The Emperor” for his mercurial performances. He dominated Serie A with Inter Milan for seasons until 2004, where an unfortunate family incident caused his motivation levels to sink and it went downhill from there. He then followed it up with three seasons as being voted the worst player in the Italian League for three seasons. Thereafter he struggled with weight, drugs and money. Pictures of him recently surfaced of living in the slums of Brazil being protected by gangs (he was seen posting photos with an AK47). He is now trying to revive his Miami United in the US, however a once glittering career and a potential rival for Messi and Ronaldo has truly stuttered and ultimately disappointed.

Another much hyped player, Adel Taraabt had everything going for him. English Premier League sides were fighting to sign Taraabt, who just had a natural ability to control and do with the football what he wants. He was punted as the next “Di Canio” and even some hinted him to be the next Zidane. That’s no small comparison, as during Taraabt’s start he was being compared with some of the greatest players of the game ever. Taraabt saw himself moving between Tottenham Hotspurs and Queens Park Rangers in England but never was quite to put together a string of consistent performances that was equivalent to his talent. He would put on flashes of great performances, where he would stand head and shoulders above the rest of the players, but unfortunately such performances were far and few between. The problem he ran into was fitness, laziness and being overweight. As often happens with talented players, because there is a big presence of talent sometimes they don’t feel they need to train. It is this exact reason why Taraabt struggled to ever get a career going. He is now playing in Italy for Genoa, after being loaned out by Portuguese side Benfica.

If anyone watched Ibrahim Afellay at a young age, they would be immediately tell you he was going to be a big star. The football was like a magnet to a boot. He seemed to almost have an unfair majestic ability over his opponents and teammates. A born naturally talented footballer, Afellay started playing for PSV Eindhoven and captained the side over the years, making headlines each game he played. Subsequently, Afellay had the world at his feet and all the big clubs approached him and eventually he chose Barcelona in 2011. Since then however, his career has been littered by injuries and only 20 appearances in 3 years. It’s more his injuries that contributed to his career not projecting as it should of, and it’s a shame. Despite this, Afellay is still 28 and is currently trying to reiginite his career with Stoke City in England.

Depay’s move to Manchester United had everyone screaming that he is the next ‘Cristiano Ronaldo’. It’s often these unrealistic expecatipons that leads to many players downfall. After moving for £31million from PSV Eindhoven to Manchester United, Depay’s performances were extremely underwhelming, As a result of poor management, he was often played out of position and got quickly frustrated. He also was being outshone by much younger stars at the club at the time (Anthony Martial, Jesse Lingaard). With a bruised ego, and a lack of playing time, Depay eventually moved to French side Lyon. His team during Manchester United really halted him from being a true world football star. He fell victim to the lavish lifestyle that the high salary offered him, being drawn to fashion and car collections which side tracked him. He is still young though and with Depay’s wealth of talent can easily revive his career.

The curious case of Jack Wilshere. At the age of 16 he seemed to have all the talent in the world and all of the world was watching him. It might have been this expectation that ultimately lead to his downfall, or the fact that he was exposed to too many games at a young age. This subsequently lead to an onset of injuries that plagued most of his career and is what fans know synonymously associate injuries and Wilshere together. Jack Wilshere was someone that was loved by everyone in the Arsenal Football club and during his breakout seasons he lived up to the hype. He earned several awards, including being part of the PFA team of the year, Arsenal player of the season and BBC’s young player of the year. All the accolades laid his career ahead for him. However, what followed was subsequently heartbreaking. A broken ankle, a fractured, a broken foot, and a fractured fibula later Wilshere’s injury list is rather sad. It’s often his abrasive style that got him these injuries. Despite this, he is only 25 years of age still, and might still be able to receive his career. He had an impressive spell with Bournemouth last season before injury, and it’ll be interesting to see what Arsene Wenger’s plans with Arsenal’s former wonder kid will be.