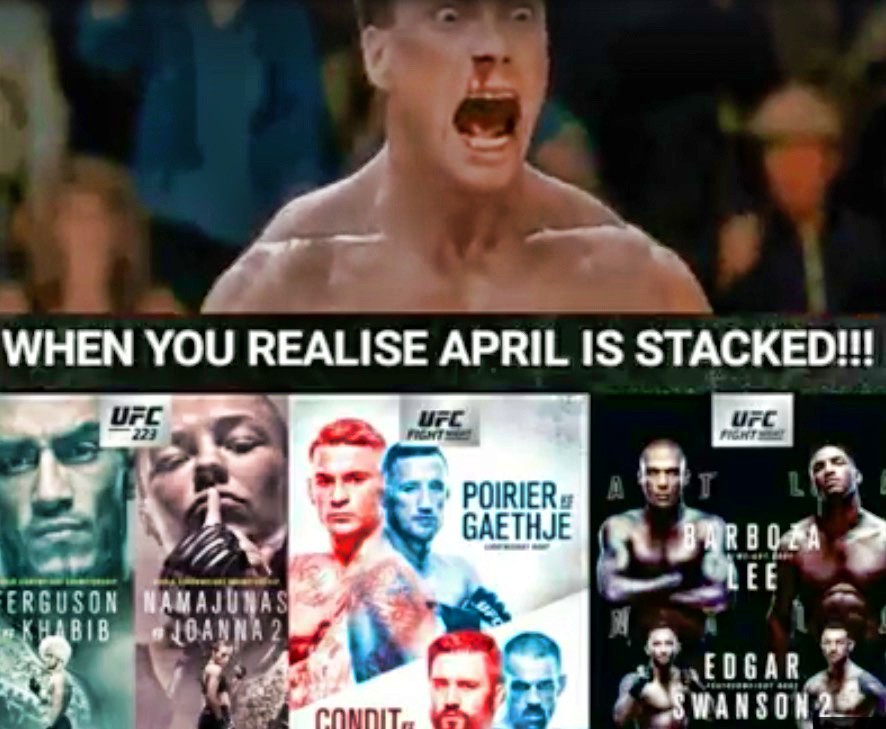 The UFC’s April Schedule Is Stacked

March 2018 has rather been a lean month for the UFC as the promotion only had two events scheduled for this month. First off was UFC 222 last March 3, 2018 where we watched UFC women’s lightweight champion Cris Cyborg put on another dominant performance in the main event. And then we witnessed Alexander Volkov stun former UFC heavyweight champion Fabricio Werdum at the headliner of UFC Fight Night 127 two weeks ago. We haven’t heard from the UFC since then. So if you missed the violence, you are certainly alone.

We don’t have to wait much longer, though. That’s because the UFC’s schedule for the month of April 2018 is stacked and loaded. So if you don’t have plans yet, check out the schedule and star making them now. If you’ve planned out already, there’s still enough time to make new plans because if you’re an MMA fan, you’re going to love the upcoming schedule. 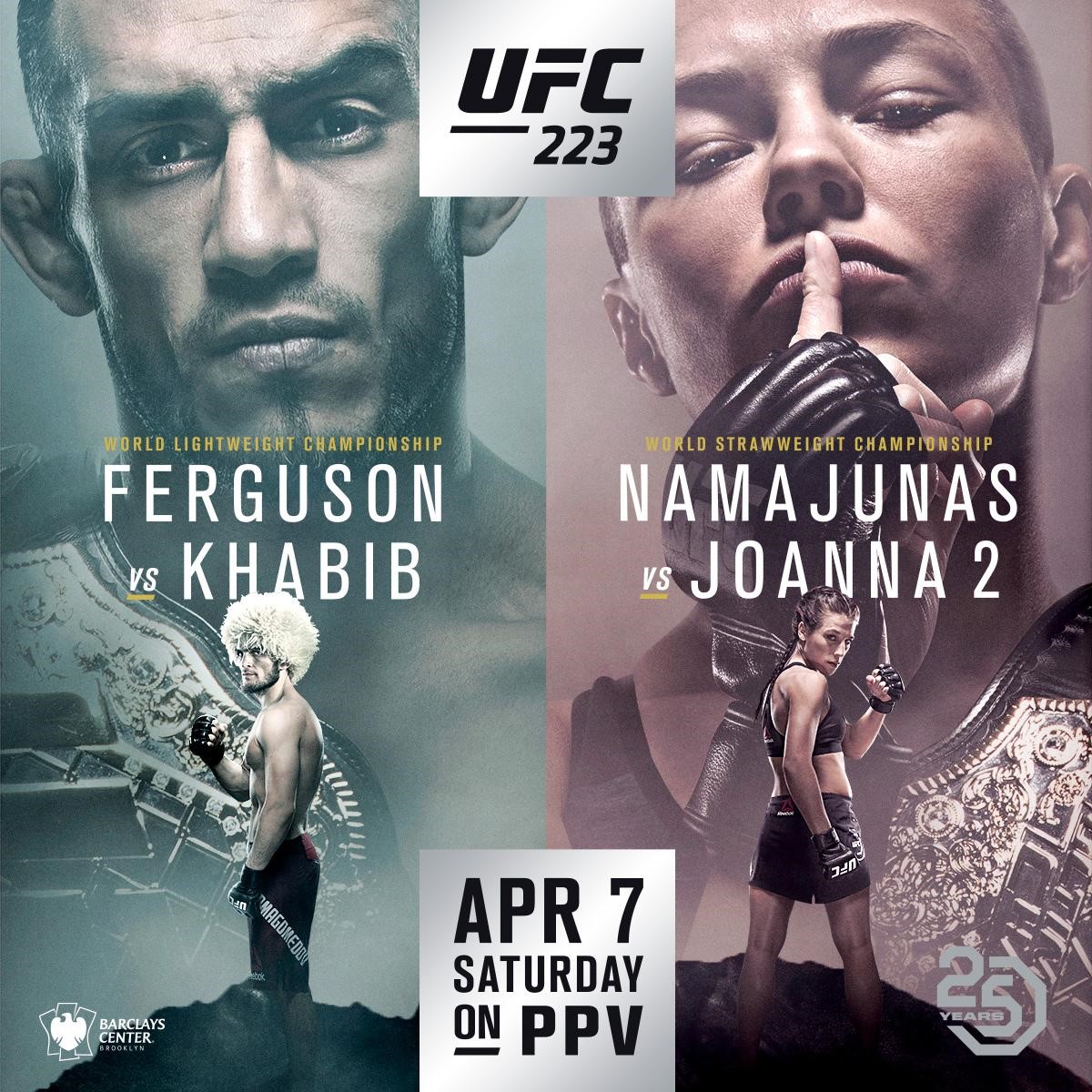 The UFC begins April with its biggest card of the month. Two belts will be on the line as the UFC returns to Brooklyn’s Barclays Center on April 7th.

In the co-main event, UFC women’s strawweight champion Rose Namajunas makes the first defense of her world title against the woman she won the belt from. Joanna Jedrzejczyk was an unstoppable force, dominating one foe after another and repulsing one title challenger after another. But the Polish sensation ran into Thug Rose and got a dose of her own medicine at UFC 217. Namajunas knocked out Jedrzejczyk in one of the biggest upsets in women’s MMA history.

Jedrzejczyk was one successful title defense away from tying the record set by Ronda Rousey. But instead of joining Rowdy on top of the pedestal, Joanna got pulled back to earth by an unlikely challenger. Namajunas had won only four of her last seven bouts but with the dearth of challengers at their weight class, she earned a shot at the unbeatable Jedrzejczyk. Thug Rose accomplished what was thought to be almost impossible. Now she has the chance to prove that it was no fluke. For Jedrzejczyk, this is a shot at redemption and an opportunity to bring the belt back to Poland where she says it truly belongs.

Ferguson won the interim belt with a spectacular triangle choke submission of Kevin Lee at UFC 216. The victory was the 10th straight for Ferguson, giving El Cucuy the record for most consecutive wins in lightweight division history. Ferguson has not lost since dropping a unanimous decision to Michael Johnson in 2012. He hopes to add on to the streak by handing Khabib Nurmagomedov his first ever MMA loss.

Nurmagomedov is the former combat sambo world champion who is undefeated in 25 MMA bouts. Known as one of the best grapplers the game has ever seen, Nurmagomedov has stopped every man placed in front of him. Khabib is looking forward to add Ferguson to his growing list.

The fight between Ferguson and Khabib was scheduled three times in the past but each time it was booked, either one of them had to pull out because of an injury. With both 100% healthy now, the two are going to collide in one of the biggest and most anticipated fights of the year. 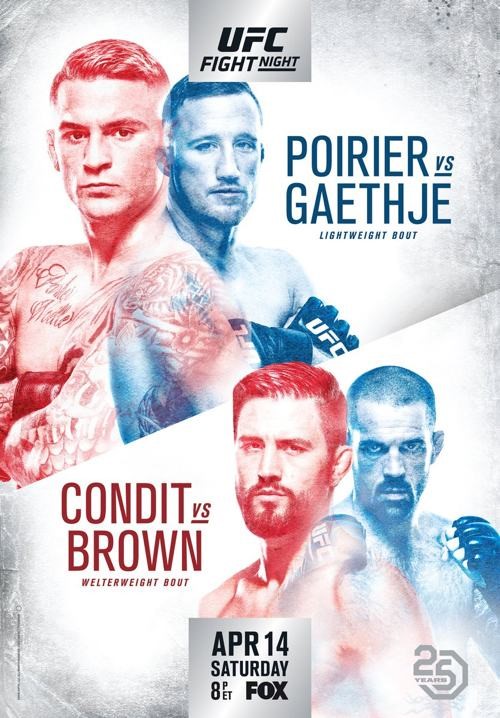 Unlike UFC 223, this event doesn’t have a title fight. But that doesn’t mean this is going to be less exciting and fun to watch. In fact, if you really love violence, then maybe this is the more violent event.

In the co-main event, Carlos Condit attempts to get back on the winning track after losing three consecutive fights for the first time in his decorated MMA career. The Natural Born Killer is one of the most exciting and vicious strikers the UFC has ever seen. This former WEC welterweight champion won the interim UFC welterweight belt by defeating Nick Diaz at UFC 143 in a memorable five round war. Most recently, Condit figured in the 2016 Fight of the Year when he battled then welterweight champion Ruthless Robbie Lawler to a five round bloodbath which ended in a split decision win for Lawler. Since then Condit lost to Demian Maia and Neil Magny. After some soul searching, Condit has decided to put his retirement plans on hold.

Fighting Condit is another equally exciting warrior in Matt Brown. Known as the Immortal, Brown has been down so many times but he just keeps on coming back for more. Like Condit, Brown has been in a funk, losing five of his last seven bouts. But after a Performance of the Night win over the original Ultimate Fighter Diego Sanchez last November, the Immortal has risen again and will face Carlos Condit in what could be a crossroads match for both.

The violence gets better in the main event as former WSOF lightweight champion Justin Gaethje faces Dustin Poirier in a lightweight scrap. Gaethje is considered as one of the most exciting fighters in the sport today, owing to his devil may care knock you out or knock me out attitude inside the cage. Known as the Highlight, Gaethje has 15 knockouts in 18 wins. In his UFC debut, he knocked out Michael Johnson in the 2017 Fight of the Year. However, violence caught up with Gaethje after former UFC lightweight champion Eddie Alvarez outgunned him in a classic brawl at UFC 218. While Gaethje lost that fight via third round knockout, it earned him his second Fight of the Night in as many UFC bouts.

Dustin Poirier has seen his stock rise after moving to the lightweight division. Poirier has won six of eight bouts at lightweight with four wins coming by way of knockout. The Diamond’s only loss at this weight class was a first round knockout debacle against Michael Johnson in 2016. In his most recent bout, Poirier knocked out former champion Anthony Pettis at UFC Fight Night 120 last November. The Diamond owns seven post fight performance bonuses, proving that he is one of the UFC’s most exciting performers.

Also fighting in the undercard is Israel Adesanya, the Nigeria-born New Zealander who made a rousing debut at UFC 221. That impressive TKO victory earned the former kickboxer Performance of the Night honors. 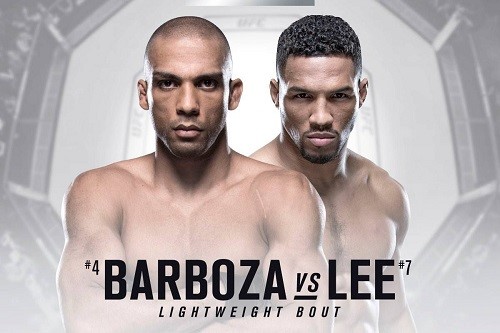 New Jersey’s own Frankie Edgar fights in the co-main event. The Toms, New Jersey native faces the hard hitting Cub Swanson in a battle of two of the most beloved veteran fighters in the UFC. Edgar is coming off the first knockout loss of his career against Brian Ortega earlier this month at UFC 222. But despite calls for his retirement, Edgar has chosen to fight back and is doing so against one of the more dangerous foes available in the UFC’s featherweight roster.

Cub Swanson is one of the UFC’s biggest punchers and one of its more exciting strikers. The winner of 10 post fight bonus awards including 8 Fight of the Night honors, Swanson is currently the 5th rank featherweight in the UFC. Like Edgar, Swanson lost his last fight to Brian Ortega via guillotine choke. He’s won 10 of his last 13 bouts with all his losses during that period coming via submission. One of those losses came against Frankie Edgar at UFC Fight Night 57 in 2014 so Swanson has extra motivation coming to this fight.

In the main event, 7th ranked lightweight Kevin Lee was hoping to welcome back Nate Diaz to the UFC. But the Stockton standout opted not to return to the promotion, hence Lee will instead face the 4th ranked Edson Barboza in what could be one of the most underrated fights of the year. Half of Kevin Lee’s 16 wins have come via submission but he is also a very good striker. How good he really is, we’ll find out in this bout as he faces one of the most dangerous strikers in the history of the lightweight division.

Edson Barboza is known for his striking, owing to his Muay Thai background. 11 of Barboza’s 19 MMA wins have come via knockout and he is considered as one of the greatest strikers in the history of the UFC lightweight division. After losing to Tony Ferguson in the TUF 22 Finale, Barboza beat Anthony Pettis and Gilbert Melendez in back to back fights. However, Barboza is coming off a one sided defeat at the hands of Khabib Nurmagomedov. Eager to prove that he is more than just a gatekeeper, Barboza hopes to knock off the cocky Kevin Lee and get back in the title picture.