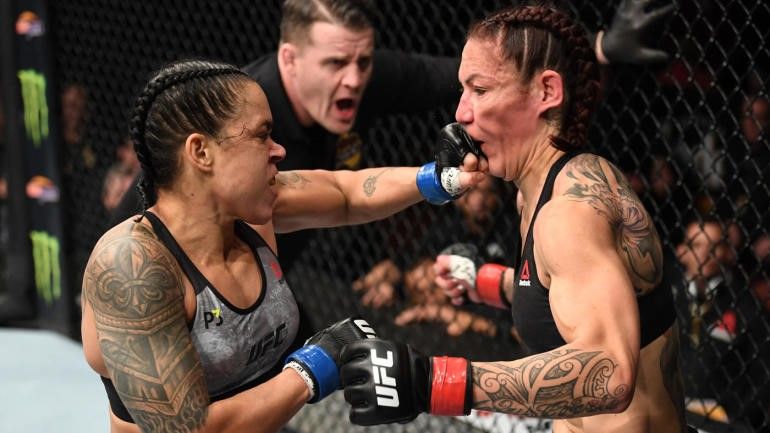 UFC women’s bantamweight champion Amanda Nunes rose in the ranks of all-time greats on Saturday night with her shocking and dominant win over Cris Cyborg at UFC 232 in California.

Nunes entered the fight as the underdog but in the lead-up to the fight, she had been telling the world that she would knock out the most feared woman in the planet. Only few believed in her then. Now many are calling here the greatest female mixed martial artist of all-time. Count in UFC President Dana White, who was quick to ride the Amanda Nunes train on Saturday night. Said White at the UFC 232 post event press conference:

The fight with Cris Cyborg was the first true super fight in women’s MMA as it featured two reigning champions facing off each other. Cyborg entered the fight as the reigning UFC women’s featherweight champion and was defending her belt against Nunes, who is the current UFC women’s bantamweight champion. Nunes ended up winning Cyborg’s belt and becoming the third fighter to simultaneously hold two UFC belts. With Conor McGregor and Daniel Cormier as the only other UFC fighter to accomplish the feat, Amanda Nunes is the first female fighter to do so.

It wasn’t just what Nunes accomplished that makes her an all-time great. It was the manner in which she did so. Cris Cyborg entered the fight having won 20 fights in a row with all but three ending in a stoppage. Cyborg had not lost a fight since losing her MMA debut via submission in 2005. She had been champion since retiring MMA pioneer Gina Carano in 2009 during the first ever MMA event headlined by female fighters. She fought in 13 consecutive title fights, winning three in as many promotions, to become one of the most dominant champions of all-time. But against Amanda Nunes, Cris Cyborg last 51 seconds.

Cyborg looked bigger and stronger at the onset and tried to bully her way to Nunes. But the Lioness was faster and quicker with her hands. And yes, Cyborg did not respect her punching power and she paid dearly for it, face-planting at the end of the fight. Cyborg tried to walk through Nunes but before she could land one of her dreaded power punches, Nunes landed a couple of hers already. After getting nailed by at least five big punches from Nunes, Cris Cyborg starter to buckle. But instead of holding or clinching to recover, Cyborg fought back with reckless abandon, perhaps thinking she could sway the momentum with one punch. That didn’t happen. Everything fell apart in just 51 seconds.

With the win, Nunes becomes the first fighter to defeat both Cris Cyborg and Ronda Rousey and she beat both in under one minute each. It can be recalled that Nunes made the first defense of her UFC women’s bantamweight title against Rousey exactly two years ago at UFC 207. She knocked out Rousey in 48 seconds. Nunes also holds two wins over the reigning UFC women’s flyweight champion Valentina Shevchenko, regarded as one of the greatest mixed martial artists of all-time and an 18-time world champion in kickboxing and Muay Thai. Not only that, Nunes also owns another first round TKO win over Germaine de Randamie who was the UFC’s inaugural women’s featherweight champion. Then Nunes also has a victory over Miesha Tate, whom she won the bantamweight belt from.

A Good Problem At Hand

Not many gave her the chance to beat Cris Cyborg not especially via first round knockout. But only a handful of people know that Nunes began her career as a featherweight before settling down at 135 pounds. So moving up in weight wasn’t really a problem. Nunes has never missed weight for a fight but she revealed her struggles making weight. For the Cyborg fight, that was the least of her worries because as she said, she worried about weight and training in previous fights but against Cyborg it was just pure training. And it showed on Saturday night. Now Nunes has a good problem at hand and that is who will she fight next.

When you take a look at Nunes’ fight resume, she’s already cleaned up her division and with a win over Cyborg who was deemed unbeatable in her own weight class, then we can presume Nunes would be unbeatable in that division too. But Nunes’ career isn’t perfect and she doesn’t have an unblemished record. In fact, she has four losses in her resume, three of which came before she arrived in the UFC. Nunes’ only UFC loss came against Cat Zingano at UFC 178. The Lioness was knocked out in the third round in the fight where she infamously lost steam after dominating the early goings. The Zingano fight and her first bout with Shevchenko showed that Nunes wasn’t invincible and showed signs of slowing down in the latter stages of fight. Because of those fights, her cardio and stamina have often been perceived as her weakness. But after back to back five round title defenses against Shevchenko (in their rematch) and Raquel Pennington, Nunes proved otherwise or that she had gotten better. With her weakness resolved and her weight class cleaned up, it was one year ago when Nunes said she texted UFC President Dana White to ask for a fight with Cris Cyborg after the latter had defeated Holly Holm. Said Nunes:

"I texted direct to Dana White that I wanted this fight and to make this happen for me, please," Nunes said. "And he texted me back that he would make this happen for me. I said, 'Let me know, I need some time because I need to get ready. I'm very small right now at 135. But give me some weight and I'm going to be strong and take that belt, I'm 100 percent sure.'"

White and Nunes have had a love-hate relationship. After Nunes pulled out of UFC 213 due to sinusitis, he said she’d never headline an event again. He lied, as usual, and Nunes went on to headline UFC 215 and 224. And then he gave in to her wish to fight Cyborg in the first ever female superfight in the UFC. Now she’s at the brink of superstardom and White knows it.

“You think Amanda Nunes isn’t going to be a star after this? I f*cking guarantee it. I promise you that. The place went crazy for her and I don’t know what’s next. Tuesday, we’ll be back in the office and we’ll have a meeting and we’ll figure out what’s next for her.”

With his pet Ronda Rousey now in the WWE and with Cris Cyborg now defeated, it is Amanda Nunes’ turn to run the show. She does not have the charisma of Rousey nor the fear factor of Cris Cyborg. But she is now the best female mixed martial artist there is. But is she the best ever? She’s beaten the other fighters who were considered as the female GOAT so by process of elimination as she’s beaten both, she is.