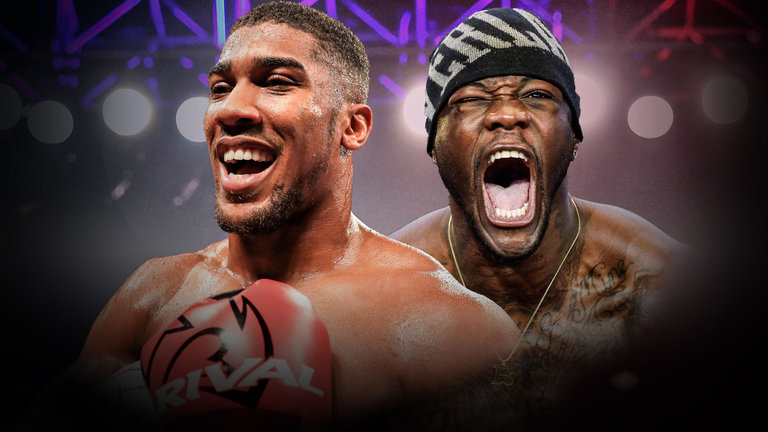 Deontay Wilder vs. Anthony Joshua Must Happen Next

Deontay Wilder delivered on his pre-fight promise and then called out Anthony Joshua after doing so.

A visibly frustrated Wilder promised to knock out Bermane Stiverne in the most graphic manner after his original bout with Luis Ortiz fell off the shelf following the latter’s failed drug test. During Thursday’s pre-fight press conference, the Bronze Bomber guaranteed a beating.

Wilder fought like a man on a mission and he disposed of Stiverne in just one round, knocking down his challenger three times and almost literally knocking off his head with his final blow. Stiverne lay slumped on the ropes in a scary scene at the 2:59 mark of the first round.

It was a good thing that Stiverne was okay later because every punch that Wilder threw had bad intentions. No, he had nothing against his Canadian opponent. But Stiverne was in the wrong place at the wrong time. Sure, he did some trash talking on Wilder during the pre fight press conferences. But he paid dearly for something he did not do.

The Canadian had fought just once in the last three years. That was a unanimous decision win over little known Derrick Rossy. Prior to that, Stiverne lost his title to Wilder in a fight that produced the first American boxing heavyweight champion since Shannon Briggs in 2004.

You can say what you want about Stiverne but Wilder did his business in an impressive manner. He didn’t pick Stiverne in the first place. Wilder wanted to fight Ortiz, who was looked up to as Joshua’s big challenge. Ortiz was Joshua’s WBA mandatory challenger but the Brit chose to fight Pulev. That’s another story though. The point is Wilder was set to fight the man nobody wanted to face in Ortiz. But he cheated his way out and so Wilder had to make do with Stiverne.

The Presumed Man to Beat

Joshua beat up a similarly overmatched opponent in Carlos Takam a couple of weeks earlier. Takam was also a replacement opponent for Kubrat Pulev, Joshua’s IBF mandatory who suffered an injury weeks before the bout. Joshua couldn’t put Takam away and needed the referee’s premature stoppage to earn a knockout. Sure, he was having his way. But he couldn’t put away Takam.

Still, Joshua’s performance against Takam doesn’t take away his April victory over Wladimir Klitschko. Joshua showed tons of courage in getting up from a knockdown to stop the former longtime champion. He displayed a lot of poise in the biggest challenge he’s ever faced.

But then maybe Klitschko was no longer the same dominant heavyweight when they fought. Maybe Wlad’s loss to Tyson Fury prior to their fight already took out the fight in him. But the bottomline is Joshua beat the biggest name that was out there, making him the presumed man to beat at heavyweight. To Joshua’s promoter, that is his leverage.

Joshua’s record is perfect: 20 fights, 20 victories and 20 knockouts. Wilder, on the other hand, is unbeaten in 29 fights and has 38 KOs. The only time he didn’t knock his opponent out was in January 2015 when he beat Bermane Stiverne by unanimous decision to win the WBC title. Yes, the same Stiverne he destroyed in one round on Saturday night.

His critics say that Wilder’s resume pales in comparison to Joshua’s. You can say that for Wilder’s early fights. He did beat up bums. But so did Joshua. But when Joshua started fighting better opponents beginning with Charles Martin, Wilder tried to up his level of competition too. Unluckily for him, both Povetkin and Ortiz failed their drug tests. Not Wilder’s fault.

But now that both Wilder and Joshua have cleared their most recent hurdles, there should be no more ifs and buts. Wilder vs Joshua ( Joshua vs Wilder if you want to put it that way ) is the next logical fight for boxing’s heavyweight division. With all due respect to WBO champion Joseph Parker, there is no bigger fight than Wilder vs Joshua.

However, Joshua’s promoter Eddie Hearn has put a stipulation for the American. He has offered the American to fight Briton Dillian Whyte first before Wilder gets a shot at Joshua. Wilder brushed aside Hearn’s audition fight:

"A king don't chase the peasants," Wilder said. "A king takes kings. I want Joshua. If he don't give me the fight we have other plans. Why should I go to England to fight a peasant without the king on the contract? The world want Joshua, the world want Wilder. I want Joshua. Joshua come and see me, baby.”

There are no indications that Joshua is ducking Wilder. But Hearn is a businessman and wants to make the most of AJ’s success before risking him against a truly dangerous foe like Wilder. They have a business plan disguised in keeping Joshua’s belts by fighting his mandatories. They’ve done with the IBF. Next would be the WBA early next year and then who knows what’s next.

Wilder, meanwhile, wants no more interim fights. He wants to fight Anthony Joshua as soon as his next fight:

Beating an opponent who looked like he trained more at Burger King than a gym didn’t really add anything to Deontay Wilder’s resume. But declaring war on Joshua was perhaps the strongest words so far between the two heavyweight champions. Let’s see how Joshua responds. There must be no interim bouts. No more excuses. Forget the belts, if need be. This fight has to happen next.