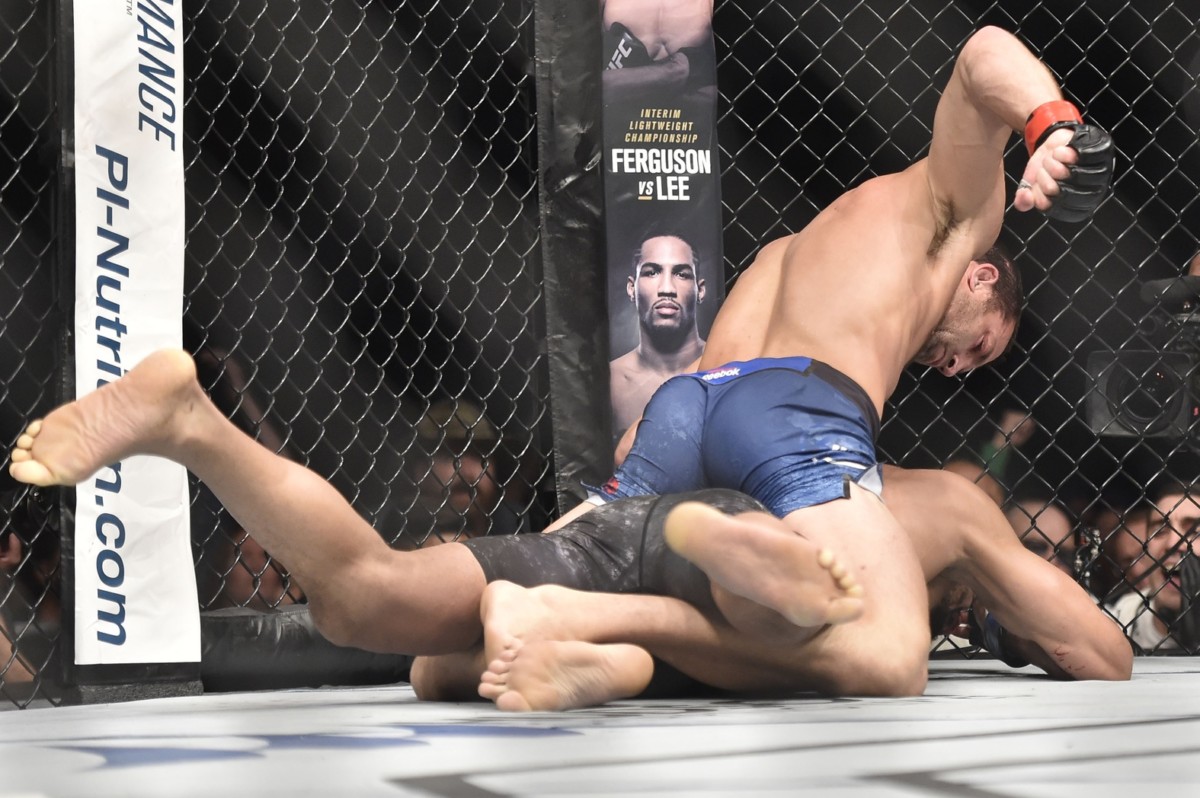 The bout was Rockhold’s first in 15 months and first since losing the middleweight title to Michael Bisping. It also ended David Branch’s 10 fight winning streak .

This is Branch’s second tour of duty in the UFC. He went 2-2 from 2010-2011, losing twice via stoppage to Gerald Harris and Rousimar Palhares. Then after his third career loss to Anthony ‘Rumble’ Johnson at Titan FC 22, he transferred to the World Series of Fighting promotion where he became its inaugural middleweight champion in 2014.

After a successful first title defense against veteran Yushin Okami, Branch entered the promotion’s 205 pound tournament and became a two-division champion by capturing the ( inaugural ) light heavyweight title at WSOF 23 in 2015. Branch then solidified his place in the WSOF promotion by defending the 185 pound belt twice and the 205 belt once.

But after his New Year’s eve 2016 win over Louis Taylor, Branch had an undisclosed issue with his promoters. He left the WSOF in free agency and signed a multi-fight contract with the UFC earlier this year. Branch drew the streaking Krzysztof Jotko in his UFC debut. Branch eked out a split decision win and stopped Jotko’s five bout winning streak at UFC 211. The victory earned him a shot at the comebacking Rockhold.

In four years at the WSOF, Branch won 10 consecutive bouts and beat former UFC fighters like Okami, Clifford Starks, Jesse Taylor and Vinny Magalhaes. But in his entire MMA career, he’s not faced someone in the level of Luke Rockhold. Rockhold was an absolute step-up in quality of opposition for him. And that was the case on Saturday night.

Rockhold made his mark at the Strikeforce promotion where he was the last Strikeforce champion before its merger with the UFC. Rockhold beat Ronaldo ‘Jacare’ Souza in 2011 to win the belt. He defended it twice the following year with a TKO of Keith Jardine and a decision win over Tim Kennedy.

Rockhold’s UFC debut didn’t go as planned. He was knocked out by Vitor Belfort via spinning heel kick in the first round of their bout at UFC on FX 8. But Rockhold bounced back with four consecutive stoppage victories to earn a shot at Chris Weidman’s middleweight at UFC 194. Rockhold stopped Weidman in four rounds to win the UFC middleweight title. However, Rockhold was knocked out by Michael Bisping during his first title defense at UFC 197.

Rockhold’s loss to Bisping was considered as one of the biggest upsets in UFC history. Bisping took the fight on 10 days notice after Chris Weidman got injured. The Count was a huge underdog but he defied the odds. Rockhold took time off to recover from that loss. He took a high paying modeling job to keep himself busy.

Late in 2016, Rockhold was busy dating Demi Lovato rather than going back to the Octagon. He was booked to fight Jacare Souza in a long awaited rematch at UFC Fight Night 101 but he pulled out of the bout because of a left knee injury. Finally, the UFC got him to headline UFC Fight Night 116 and the former champ’s return was set.

Rockhold showed his 15 month layoff ring rust in the opening round of the fight. Branch took the fight to Rockhold in round one, letting his hands go and landing a couple of big shots on the former champion. Branch had Rockhold on his back briefly but Rockhold finished the round with a takedown of his own.

In the second round, Branch kept his aggression while Rockhold looked to grapple. He pinned Branch to the cage and then secured a takedown. Once on the ground, Rockhold beautifully transitioned into a full mount and Brand exposed his back. Rockhold rained punches from the top position that forced Branch to tap out due to ground and pound strikes.

Rockhold needed a big win to announce his return and he got it against David Branch. Prior to the fight, Rockhold said that Branch isn’t the caliber of fighter that he is. He said he would be patient, calculated and will wait for his moments. He promised to let Branch know the difference and he did. Branch was game but it was clear that he isn’t in the same level as Luke Rockhold.

After the fight, Rockhold immediately went after Georges St. Pierre, who will face UFC middleweight champion Michael Bisping at UFC 217 in November.

Rockhold has been a staunch critic of the GSP vs Bisping middleweight title bout. The fight was initially scheduled for August but was cancelled and then booked again. Rockhold called St. Pierre a joke and said that he won’t make it to the fight. St. Pierre hasn’t fought in four years and has never fought at middleweight before.

This Is My Fight

“GSP — I don’t know what I need to do, you want me to beat some sense into you? You don’t belong here….You’re gonna get crushed. You better back out. Get out of this thing while you still can. This is my fight.”

Rockhold isn’t the only one dying to fight the brash Briton. Interim middleweight champion Robert Whitaker is Bisping’s likely opponent if he beats GSP but surely, Luke Rockhold made a statement in Pittsburgh on Saturday night that he’s back.